The New Bazantar by 8DIO Review 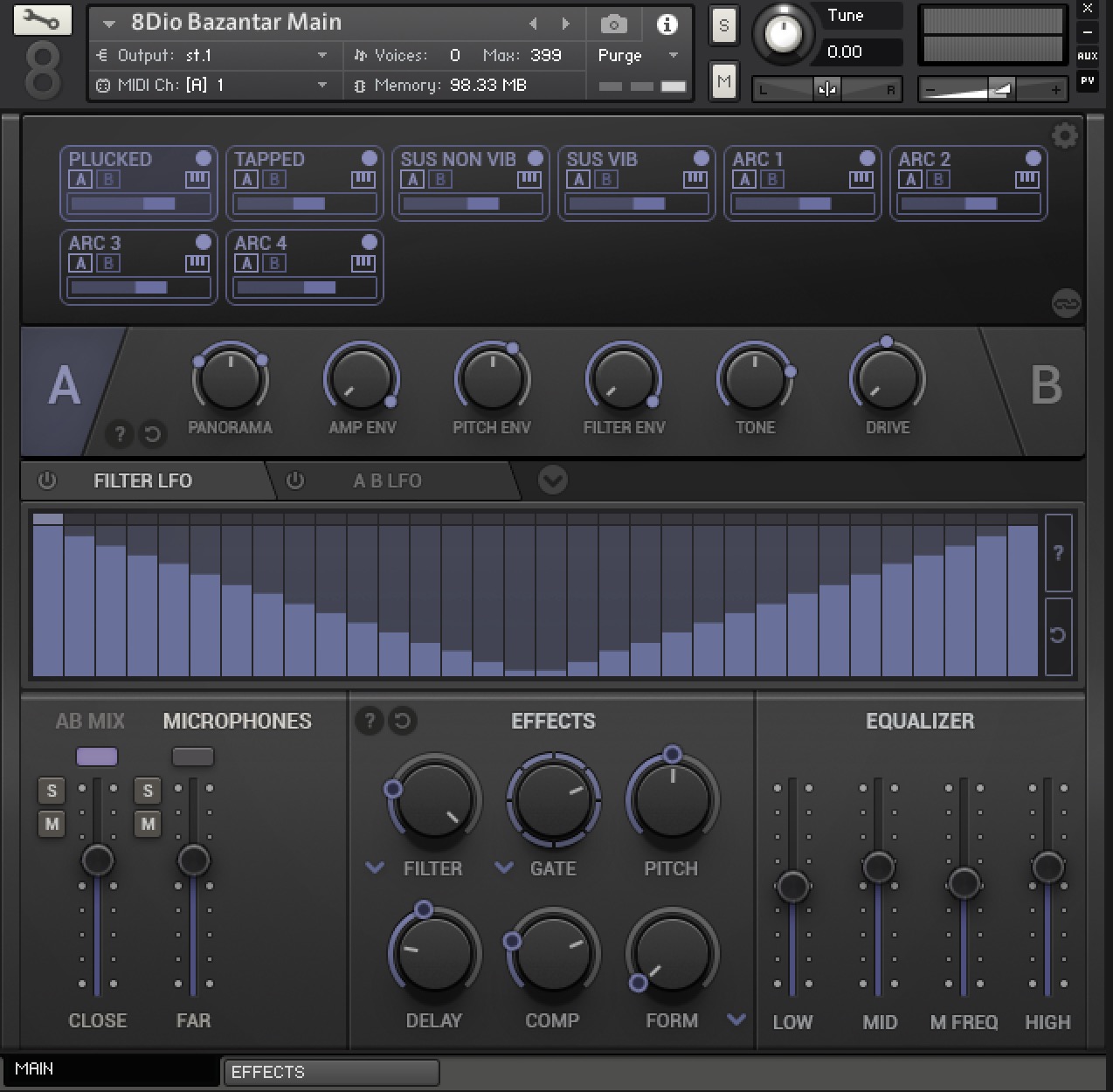 8DIO released an updated version of an existing Bazantar (initially released in 2012) virtual instrument library which is called The New Bazantar. I did use the original Bazantar and since 2016 and upgrade to the newly released. 8DIO sampled and processed a unique excellent sounding string instrument which has been beautifully performed by Mark Deutsch. Mark is also the creator of this instrument and the only person who mastered performing the Bazantar.

In a Bazantar the thoughtful strings are adhered in a modular graphite housing, located between the feet of the main bridge, and mounted at the bottom of the tailpiece and the base of the neck. The stress to the instrument’s structure is significantly decreased as torque is transferred to the body. Mark Deutsch started the development of the Bazantar in the 80s when Mark explored North Indian music and developed nonlinear mathematical patterns as a result.  A first fully developed Bazantar was ready in October 1997. It was patented in 1999 as a “Device for changing the timbre of a stringed instrument.”

Bazantar plays phenomenal and finds its use in a solo instrument, composite scores,  and to enhance many composed melody. For more dramatic and tension driven score or trailer, you can add a haunting bass-like sound. The provided patches work great in a slow passage. Customer who owns the original 8DIO Bazantar can upgrade for a small fee (USD 28).

Installation
After purchase 8DIO will send you a code which you can use using the 8DIO downloader to download the library to your hard drive. When done move the library to your preferred Kontakt library location and do a batch re-save to assure a fast sample load.

Sound
Bazantar’s identifies its tonal personality and contributes to its powerful and sophisticated tone. The music is unparalleled if you want to think about a similar instrument a Double bass comes to mind. While a life played and recorded, Bazantar would be even more impressive 8DIO managed to capture a virtual instrument for every composer to play with.

The included phrases are lovely to use in a score or even to accent certain parts of dialog or scenes. Besides the beneficial Loops and Phrases, 8DIO did include in the library arcs, plucked pizzicato,  taps, sustains. The instrument features two microphones (Close & Far) which can be mixed with the help of the UI.

The new release follows the latest UI 8DIO design for many current products. If you used this UI before in other 8DIO instruments, you hit the ground running. If you are new to this UI, you should expect some time to get accustomed to the user interface.

Rating:  Four out of five stars
8Dio has captured Mark’s invention of a unique Bazantar. While the sound of the Bazantar is unique, it does sound like a combination of a sitar and acoustic bass.  8DIO has done an excellent job in capturing the deep, hypnotic and mystique sound, included useful presets and phrases on top.

Drums of the Deep Vol 1 and Vol 2 by Auddict