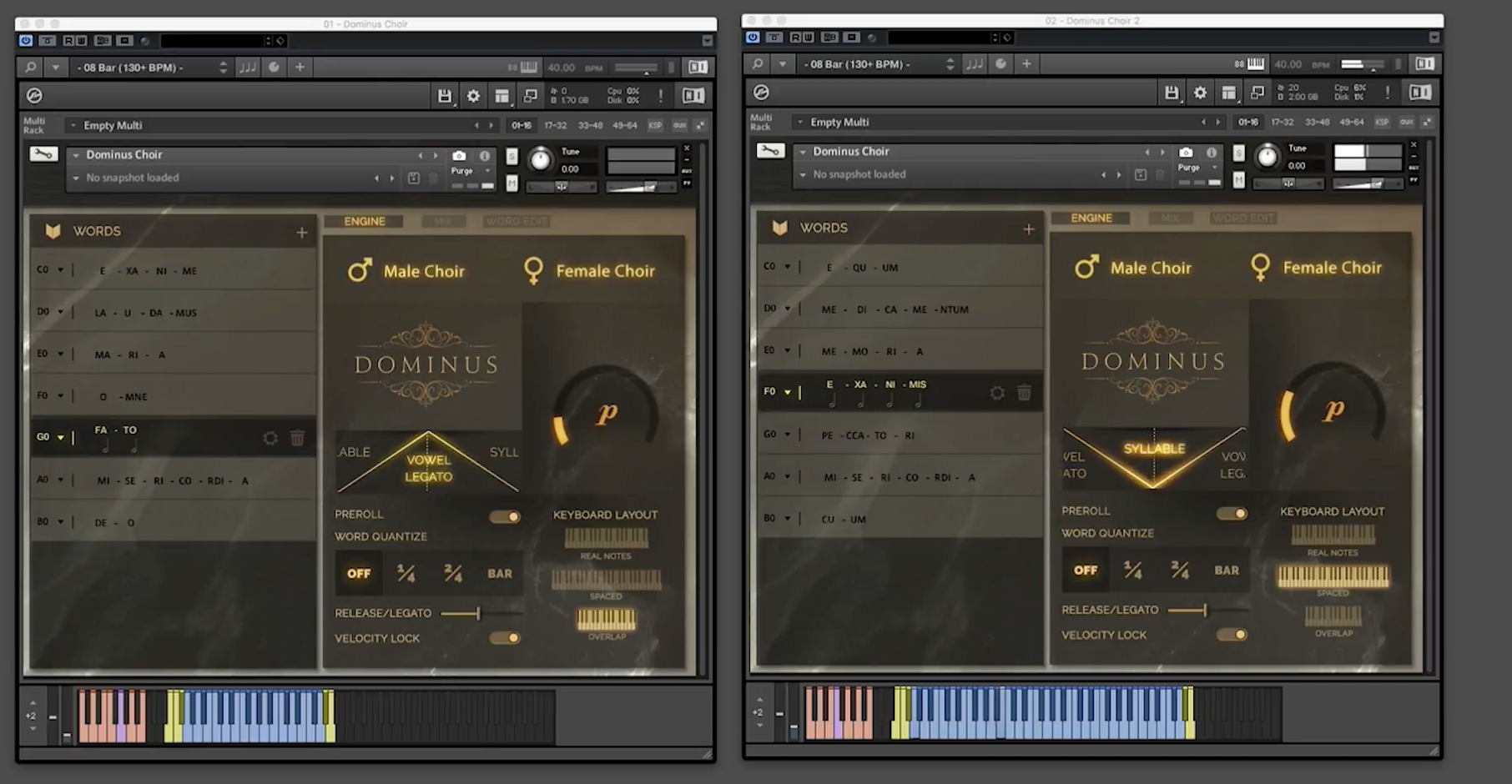 FluffyAudio worked intensely focused after the release of Rinascimento on a more ambitious project. Dominus is FluffyAudio’s Latin choir, which serves adequately for composing for movies, trailer, and video games. Dominus is, in a nutshell, a classical, sacred, ecclesiastical, realistic sounding choir library able to perform productive musical lines (singing words) with a natural interface. FluffyAudio did send me a review copy with no strings attached.“Dominus is a choral library for Kontakt 5, which is aimed to create beautiful and realistic choral music with ease,” said Paolo Ingraito Co-founder of Fluffyaudio. “It’s aimed at any composer interested in choir music, and it features an advanced scripting engine which allows creating custom words with versatility and ease.”

After buying Dominus Choir, you will receive an email allowing you to download the needed files which you can unpack and after doing a batch re-save in Kontakt (optional, but recommended), you can start playing with Dominus.

Dominus Choir is sampled from the female choir “La Rose” and the male choir “Novecento.” Recorded in the same hall where Rinascimento has been produced.

Both “La Rose” and “Novecento” ensemble performed during the recording session.

The recording resulted in four possible mic positions, the default mid mic sounds excellent most of the time. To get the sound you want you to have access to spot, close, middle and far mic positions that you can blend mutually. To be able to select the played mic position also helps you to create realistically sounding choirs and efficiently process it in third party reverb plugins.

With the included reverb you can embed the sound in different locations or use an external plugin for further placement. Dominus and Rinascimento are sampled in the same hall at Crema, in the elegant Sala Giardino.

Dominus features a different engine which automagically works as it should. By using the Word Editor and the build in Legato engine, you can intuitively and reasonably fast play the words and phrases you need for your composition. All supported by the advanced scripting which offers you extra versatility in phrasing and building words.

FluffyAudio’s approach with Dominus to add a high level of realism through the words and phrases created in the Word Editor. When you switch between defined words in the Word Editor and come back to the first played phrases, you can use a different section of the choir to sing along with the already singing part. The result is a realistic-sounding choir. With the incorporated polyphonic legato this choir offers graphic sounding legato transitions on each vowel for the included male and female singer.

Featuring True Legato transitions for all the vowels and a new method to seamlessly blends the syllables, Dominus sets a new standard in saintly choir libraries.  FluffyAudio put all effort into making a realistic library, and it’s also straightforward to use.

Dominus way to make a legato transition while a sustained Vowel is by releasing a voice and press any other voice right away. The old view will then lead to the new one. Overall this a flexible and accessible approach to play legato. You can play as slower or faster tempos. A more gradual tempo will always sound more natural than faster ones due to the implementation of the engine and recorded samples available. You can achieve excellent results clearly and quickly as Hagai Davidoff shows. Hagai plays Dominus with the help of a Breath Controller in concert with percussion and an Organ.

With the included reverb you can embed the sound in different locations or use an external plugin for further placement. Dominus and Rinascimento were sampled in the same hall.

In Dominus you can merely make words, play them polyphonically and the choir engine performs your text in a lifelike and emotional way.

The word editor UI is based on an easy to understand as Dominus; you can select up to 6 syllables for each word, defined by the design of the UI real estate. One shortcoming is that when you create a new word, you do not switch automatically to that new word line, which did results in my experience that you overwrite what you just created.

You can play the female and male choir as single groups or play them together. You can select the choir you want to play solo or use one of the three keyboard layouts to separate male from female sounds across the keyboard. Male would be on the lower part and female on the upper part of the keyboard. Overall you can choose from 3 keyboard layouts. Your needs inspire these three keyboard layouts. When you select the keyboard layout (spaced) that split female and male across the keyboard, you can write grouping male and female voices. With the second arrangement (overlay) the female voices double the male voices, in the third layout  (Real Notes) you can play the exact octave (octavus) for each voice. With these three arrangements, you as the conductor and choirmaster get the best support on how you play and write according to your favored way and demands.

With the included choir balance you can arrange the played choirs best used with the overlay keyboard layout or if you want to transfer between the two choirs undoubtedly. The balance section of the interface also allows you to manage the loudness of the different ranges of the choir if you need to tame down the upper ranges. Keep in mind louder sounding upper ranges are natural.

Dominus is a magnificent, inspirational, and emotive virtual choir instrument. It is easy to use and grants fantastic singing right out of the box. There are many choirs to choose from today, and as a composer, you need more than one choir to compose, Dominus should be part of your must-have phrase choir arsenal. The phrases, timbre are lovely; the samples are well recorded. The provided legato is cleverly scripted which results in a legato that sounds realistic and fits well into a mix. To have access to both the female and male choir is what you can expect today. The  Word Editor is straightforward to use and helps you to get results promptly. Having in mind that FluffyAudio had to cope with the enormous cost of labor in producing this choir it is priced at a competitive market price.

FluffyAudio has made it happen and designed Dominus in a way that delivers immediately that real choir feeling. With Dominus you get a real spiritual choir feeling and the ability to create convincing,  faithful, and holy music.