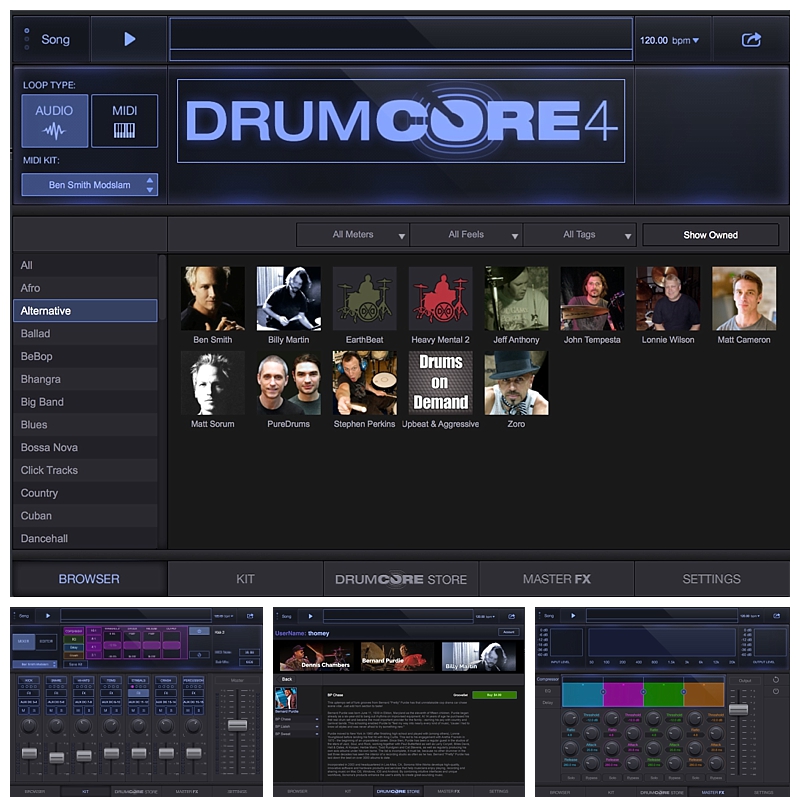 Over the last months and years, a large number of new virtual drum instruments have arrived. The drum packages come typical with a starter option and allow you to upgrade the content through additional purchases. In this market, there is a hidden gem that you may not know: DrumCore 4

DrumCore 4 is drum library featuring contributions from some of the world’s best drummers. The included drum recordings are shared as MIDI and actual records (loop) from the performance.

DrumCore 4 comes in four editions Lite, Prime Link, Prime Flash, and Ultra. Depending on the version you select you to receive more or less content. There is also a store included which is available in all versions. Through the store, you can add drum loop and MIDIs on low costs per drummer.

The lower end versions of DrumCore 4 could make sense for you if you want that artist recording that anyhow available in the store. When it comes to the content bundled in, I would recommend Prime with and possibly upgrade later to Ultra or the Ultra version to start. Sonoma Wire Works did send a review copy with no strings attached. The review version is Ultra edition of DrumCore 4

You download and activate the application and plugin. Depending on your version you can then also download all included content. Downloading the Ultra content did take some time as the program pull every single file one by one from the server. The DrumCore 4 plugin supports the download, and you need to run the plugin to download. There is an option to get the included content shipped to you on a USB or SSD drive when you select one of the top 2 tier editions. While Sonoma’s online store supports only U.S. shipping addresses, they can ship almost anywhere. Email sales@sonomawireworks.com for details.

With the reviewed Ultra version of DrumCore 4 recordings from 18 drummers resulting in 139 multi-velocity sampled kits, 265 Groove Kits, more than 22,000 Loops, and more than 3,000 MIDI files are included. While this sounds like a large amount of content, you do see the value of the additional sounds through the integrated store when diving into specific styles.

The sound of the recorded loops and the quality of the MIDIs provided is exceptional good. When you use the MIDIs, you can select the drums playing. Through this possibility, I could create some great sounding tracks where I use an included midi and played it through a different drum kit. You can drag and drop the MIDI files directly to your DAW. Before dragging the MIDIs, you can also construct grooves in DrumCore and when you are happy to drag them over into your DAW. The possibility to build your grooves by making rhythm arrangements within the DrumCore timeline is one of the many great features of this tool offers.

The included loops can be used in a significant way that you add (or replace) a drummer into your score that would not be available to you for your scoring sessions normally. The included store is adding new styles if needed. A great feature shows only owned tracks to start with what you have and add later anything from the store that you need. This also helps to manage your expense. Items included in the store can be previewed in the browser.

Through DrumCore’s mixer page you assign basic effects and can retune and modify individual layers.

A typical DrumCore user who is making the investment into this plugin has additional third-party tools available in the DAW. When it comes to drum specific effects, compressor or EQs, I will use those effects in my DAW. With the update to 4.1 Sonoma Wire Works has added multi-out routing with seven dedicated stereo auxiliary outputs. The full drum mix is still being sent to the primary stereo output, while the sub-mixes are routed to the auxiliary outputs.

The UI has been designed to allow you to quickly find your groove based on needed style or selected drummer. MIDI loops and real recordings are grouped. Overall this is a clean and easy to use Interface.

Overall DrumCore 4 Ultra is a unique tool to add the world’s top drummers in your productions and even edit the performance or change the used drum kit. If you are a mix-engineer, who need to replace a badly performed drum in your track, a songwriter who needs a drummer playing parts of the score or a producer who want to add some exceptional (virtual) member to the group of musicians they are promoting.

With DrumCore you can establish your drum track and different from so many other tools the result is performed in an excellent way and top sound notch.