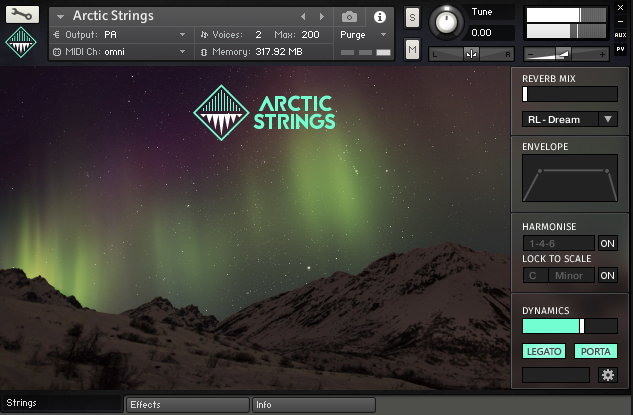 In this article, we’ll be having a quick look at an affordable organic pad library that’s great for beds, slow melodies or hybrid scoring – Arctic Strings by Frozenplain.

Frozenplain is an independent sample provider that specializes in ethereal and reasonably priced libraries for cinematic and experimental scoring, with examples like the ambient designers Slow and Colourform. Arctic Strings is a simple package focused on creating moving string beds, using sampled string sustains and onboard effects to achieve an organic/synthetic hybrid sound.

The library is downloaded in the browser (it’s a small download) and is installed by unpacking the downloaded file to your folder of choice. It runs in the full version of Kontakt.

Sound-wise, Arctic Strings has a unique character – because the strings are sampled recordings, but are presented in a way that synth strings are commonly approached – the result is a wonderfully natural sound that still feels and plays like a synth.

It’s a great hybrid sound that sports a silky character with undertones of imperfection, so it can be either layered with other synths to add an earthy feel to them, or layered with live strings or a traditional sampled string library to fill everything out. There’s no complexity here, just a great sound with a lot of flexibility.

There are a fair few controls and effects provided for the composer to tweak and experiment with, but you can get going with ease without having to touch anything. You can play polyphonically or switch to mono mode, which provides a handy portamento control for creating synth-like sweeps from one note to another.

There’s also a good amount of reverbs provided alongside the many effects available on the effects page, and some under-the-hood tweaking available for experimenters. Everything works smoothly and it’s all contained in an attractive and well scripted GUI that responds to the volume of the strings, which can add a pinch of inspiration when playing.

This is a simple library with a simple purpose – but it’s inspiring to play. Arctic Strings has a wonderfully ethereal sound and can be quite handy all things considered. While there are other larger and more expensive instruments available, this one is perfect as a compact and affordable alternative, and it deserves a place in your “go-to” collection. I recommend it highly to anyone who composes experimental, cinematic, hybrid, fantasy and sci-fi music.