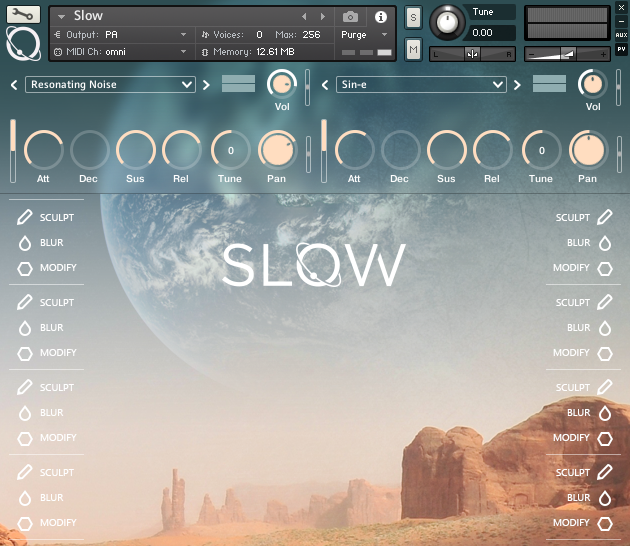 In this article, we’ll be taking a look at a highly useful cinematic ambient tool for the full version of Kontakt. There are many, many ambient libraries, plugins and synth presets on the market, so it’s easy to get lost in the ocean of content that’s available – but here I’ll be focusing on a library by Frozenplain that stands out – Slow.

Frozenplain provides a neat selection of affordably priced high-quality libraries suited for cinematic and ambient scoring, and Slow could be called their ‘flagship’ ambient library. It contains drones, melodic oddities, moving textures and soundscapes all derived from a collection of samples that can be accessed in a single patch. Essentially, it’s a clever collection of core sounds that can be easily used to create many more unique sounds using the expertly scripted GUI provided.

Download and installation is handled by downloading the zipped files in the browser and then unpacking them to your folder of choice. Then you’re ready to go.

The sounds provided are emotive, well designed and inspiring. Unlike some libraries that offer slightly harsh ambient content or random experimentations (I’ve come across my fair share of them), Slow is very well thought out.

Each sound is useable in some way or other at the least, and the sounds are well-balanced and mixed. There are soft glowing tones, shifting soundscapes, charming blankets of ear candy and strange, mutating anomalies. There’s no filler content or harsh frequencies – it’s all highly polished, which is something I admire in an ambient collection.

What stands out to me most though is the discipline exercised in mapping all of these sounds. While some sounds are atonal, the tonal variety adheres to the proper notes they are mapped to.

If you’ve played around with a lot of ambient content you may notice that some content is pitched and mapped correctly to match the notes of your other instruments, while other content is (sometimes annoyingly) a few notes too high or low, or worse – is out of tune altogether – which requires fiddling with Kontakt’s tuning knob. Slow has no tuning problems, so it’s all smooth sailing.

The library is simple to load up and play of course and comes with a top selection of custom patches and multis, but there is a depth of programming provided for those who want to customize their own ambiances and create their own soundscapes or rhythmic textures.

The core patch provides two slots – these two slots can be used to combine sounds from the decently sized core selection available – then multiple effects chains can be set up, automated to two custom LFO boxes and utilized to create some out-there sounds and combinations. Slow manages to be simple and complex in the same breath, which is definitely a plus for different varieties of composers and sound designers. What it boils down to though is that it’s a great sounding library that works well in many applications as either a foreground, midground or background tool.

Slow is charming and comes packed with swell presets to get you started straight out of the box, and it’s affordable, which makes it even more attractive. While it’s no Omnisphere, nothing really is truth be told, and this handy product deserves a solid place in any self-respecting cinematic composer’s arsenal, right alongside Omnisphere and your other favorites libraries.