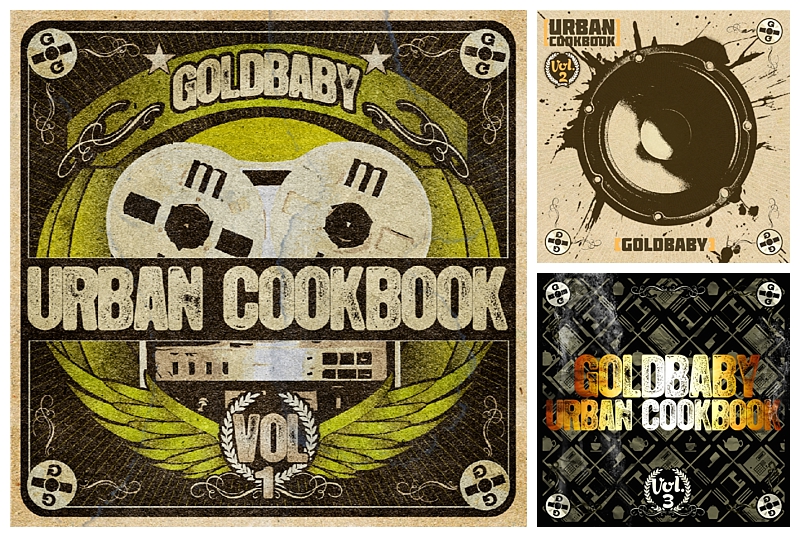 Goldbaby, the company behind this fine products has done a lot of sound design and packs for Native Instruments. You may already use some of the patches without knowing it. Urban Cookbook Vol 1 – 3 has been released some time again and still contains many usable vibes. Goldbaby did send a review copy with no strings attached.

You download the packages and install it for the different player into the required locations. You can easily use it in Machine, using Kontakt (Full Version of Kontakt is required) can be done – you are quicker with just using the wav files.

The samples in Cookbook Vol One, Two, and Three are of immense quality. With the help of vintage gear, the sounds have been recorded and mangled through gear like tape, synths and other equipment.

In all three volumes, you get a lot more sample content and the kits. With the wav sample content, you can build your own kits and mangle it in external tools. The included loops, fx loops, grooves, and beats are fitting into many productions.

With Serato Sample and similar tools, you can chuck some longer pieces and use the new content easily. Overall Vol 1 – 3 is packed with different content signed by an excellent Goldbaby vibe. Across the bundle, you get percussive instruments and loops with Claps, Cymbals, Hi-Hats, Punchy Kicks, Snares, Toms, and additional sounds to layer: noise, bass, chords, vocals, and synths.

The way to use this sounds is native or take it to new levels with plugins from third parties like Kush Audio, Kilohearts,  Goodhertz and others.

Urban Cookbook 01 has a lot of really good drum sounds with a specific style. These drum sounds are right for Hip Hop but also usable in an RnB or even Pop production I would say. The download comes with 176 individual samples in 24 Bit, which means you can resample them yourself. It gives you some really nice sounding programmed claps in different forms. Some of them are heavy with a lot of low ends, while some others are more tight and crisp. The snares come in many variations too. They have been cut, edited, and processed to fit the pack very well together I think. The hats vary from rather soft ones to really crispy ones. The ride is more of a noisier one, which I like a lot. It fits perfectly with the claps and snares.

Urban Cookbook 02 consists of 305 different samples in 24 Bit. There are again many different kinds of programmed claps and hats in this pack, but also some shakers and tambourines. The claps are pretty much the same as in Vol 1, only slightly edited and restructured by Goldbaby to fit this pack better I guess.

The snares are a lot different from those of Vol 1, which you can recognize when listening to them side by side. This pack has a more cheesy 80’s feeling to it. The shakers are very nice and have a lovely sound to them.

Urban Cookbook 03 is the biggest of the pack, containing 846 different samples in 24 Bit. You get both hats, claps, snares and other percussion sounds here while Vol 1 – 2 only had different kinds of claps & snares. The volume second consists of many different shakers which are edited by Goldbaby to fit each other perfectly. They sound really nice and can be used for any genre, especially in the rock & roll, country or Folk music genres.

The claps & snares are coming in different versions too. You get some programmed ones as well as some that have been recorded in a studio. They come in different tone qualities and with or without reverb applied.

Urban Cookbook Vol 1, 2, and 3 are packs of drum sounds that come in 24 bit wav format. The sounds are vintage and have a solid vibe to them. They are perfect for Hip Hop, but can also be used in other genres like R&B or Pop. The packs include claps, snares, hats, and other percussion sounds. Vol 1 and 2 both come with programmed claps and snares, while Vol 3 comes with both programmed and studio-recorded claps and snares.

The sounds included are excellent if you are into producing Electro, EDM, lofi (with some mangling), Hip Hop, Dance, or just need some great sounding Drum & Bass. During the review, GoldBaby has become one of my favored indie-producing studios that I will always check out for new sounds.