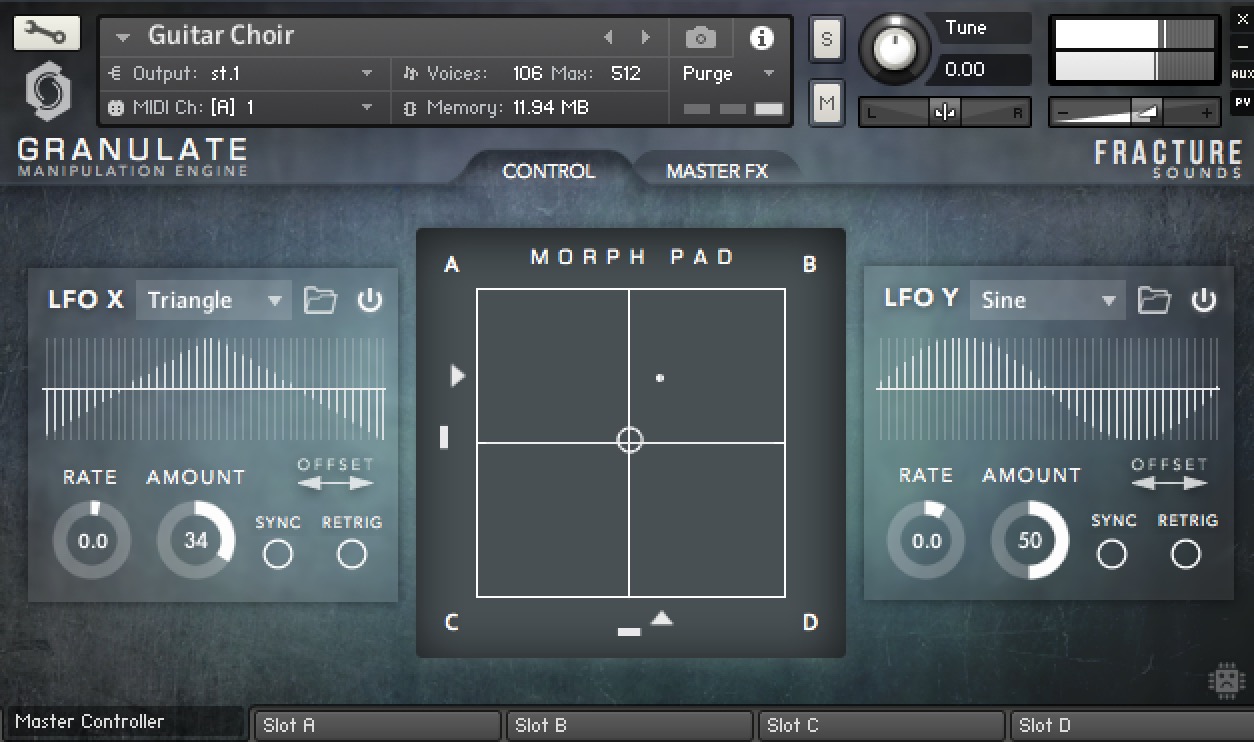 Granulate 2 was added to my library back in 2016 and is a PAD, Underscore,  and sound design tool for Kontakt 5.

It is an amazing tool for sound design and adds new ways to make use of all of the great Kontakt libraries out there (I am a huge fan of  Goliath and find it even more useful with Granulate 2). The way that everything works is by importing any WAV file into the Granulate 2 editor, giving it some time to process your file, and creating unique soundscapes, pads, textures, etc.

One thing I really like about this software is that you can import almost any sample or WAV file (the one requirement is that your files are 44.1 kHz) – so if there’s a sound that you’ve heard and you want to explore it further, simply import the WAV into Granulate 2.

The interface is very organized with a file browser on the left, the center editor window, and patch list/load buttons on the right. You can save patches for later use in your library which is my preferred way of using Granulate 2.

Granulate 2  requires the full version of Kontakt 5.1 or above. It will NOT work in the free Kontakt Player. Some preset feature public domain samples from Philharmonia Orchestra and MusOpen.org – you may have to confirm that you can use the results commercially.

Granulate 2 is an efficacious manipulation engine for modifying included ones or your own (see below) into pads, drones, textures, and rhythmic goodness.

Textures and drones are two of my favorite sounds to create, and Granulate 2 is the perfect tool for both. I love the way you can import any WAV file into the editor and create unique soundscapes, pads, textures, etc. – so if there’s a sound that you’ve heard and you want to explore it further, simply import the WAV into Granulate 2.

The interface is very organized with a file browser on the left, the center editor window, and patch list/load buttons on the right. You can save patches for later use in your library which is my preferred way of using Granulate 2.

I’ve used Granulate 2 to create some amazing drones and textures that I’ve used in various music projects. I love the way that I can import any sound and give it a go with Granulate 2!

Granulate 2 extends notably surpassing conventional synthesizer. The engine transforms your and included samples not only in pads and drones. It also shines when generating rhythmic loops.

Over 80 presets are included in Granulate 2. They are categorized by Tonal, Chordal, Atonal, and Rhythmic sounds.

When released Granulate 2 used the main tool to drive the sound in the form of a Pad. The Pad is called Granulate Quad and is presented as an extended engine. Through the Pad you mix 4 different sounds and morph between the samples. Morphing pads are very common these days and are a great visual way to blend different sound sources and the possibility to generate movement.

It is almost effortless to produce usable pad. The Kontakt library is due to the Interface design very supportive to build promptly magnificent sounding pads.

When you want to include your own samples and use them in Kontakt, you have to go deeper than you might when performing a Kontakt instrument. The developer provides some guidance on how you can include your own sounds. For more details go to their main website and take a look at the Manual that ships (in electronic form) with the product.

The manual is basic and written for the more advanced Kontakt user. Some parts of the manual might be over the top if you just start with the sample player and available libraries.

When I back in 2016 struggled with the importing my own files someone said in a forum to me “Spend the time to learn how to import the wav’s. Its well worth it. Yes, you do have to open the Kontakt interface and drag it onto the mapping page. But once you get used to that, its a piece of cake” What can I say he was right, you learn the basics and you are set for the future.

Before you use external effect plugins you can leverage the included effects: Amp, Flanger, Delay, Rotator, Transient Shaper, and Convolution Reverb.

Granulate 2 by Fracture Sounds is an amazing tool for creating drones, textures, and rhythmic loops. The interface is very easy to use, and the presets are categorized by type. I’ve used Granulate 2 in a number of music projects and love the results. Highly recommend!

Granulate 2 is an excellent tool, easy to use Kontakt library to create pads, for any composer it is a refreshing extension to your toolbox. to any composer’s arsenal.

SD032 TANK RESONATOR by HISS and a ROAR Review