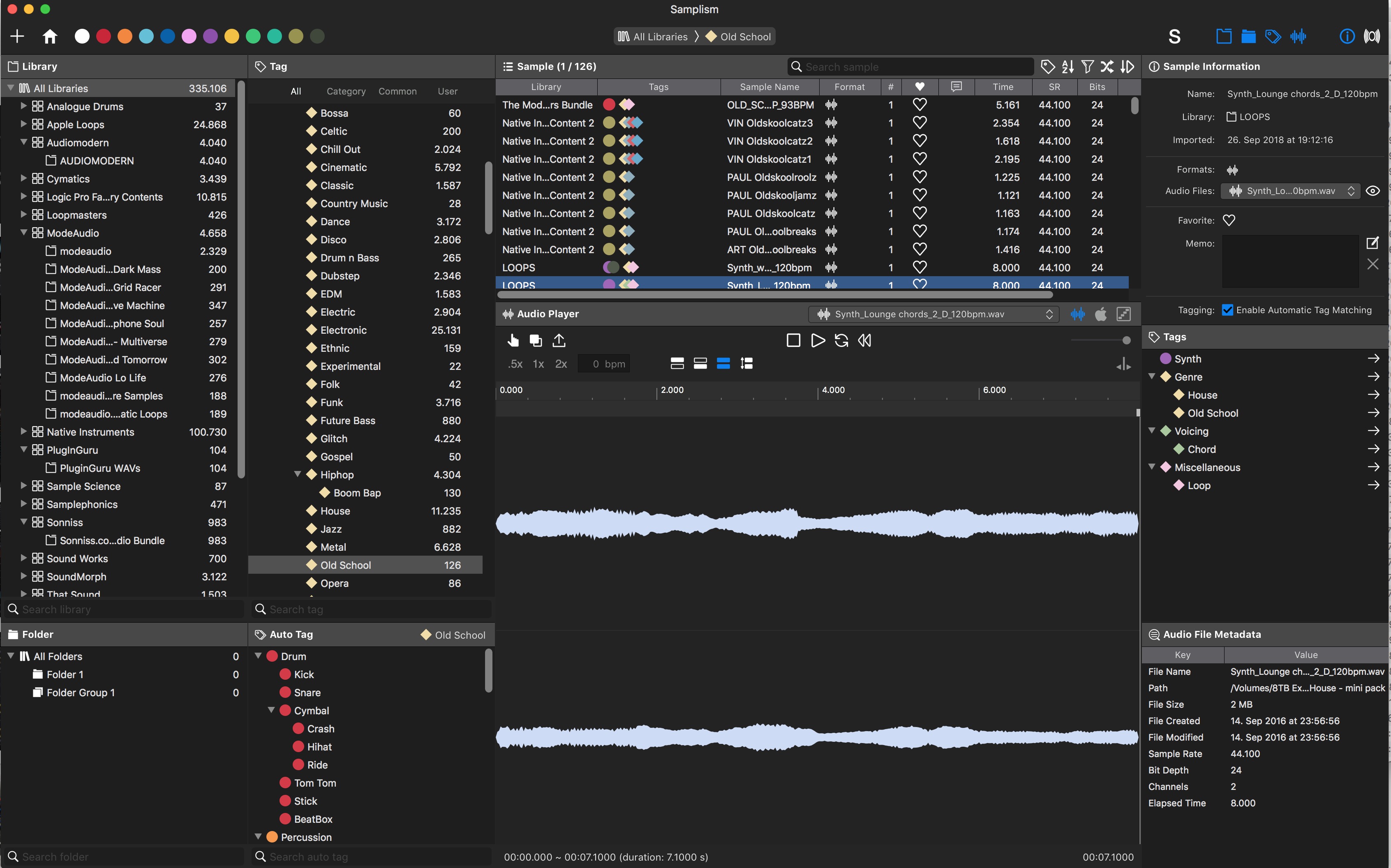 Samplism is an exceptional tool is a great help to find a sample, sound or track that is similar to a sample or sound that you’re looking for when working on a  new track.  AUDIO HELPER PROJECT did send a review copy with no strings attached. Samplism is an audio file manager that assists you to organize, search and preview your audio sample and sounds library.

You purchase the App in the Apple Apps store on a MAC and download it after purchase. There is a demo version available which has some limitations as you would expect.  Samplism takes full benefit of the modern macOS technologies including Core Audio, Core Animation, and Grand Central Dispatch, and is fully optimized for 64-bit and multicore processors.

Samplism is for any composer producers with an enormous number of samples. Lost the overview and has no join, plan or idea on how to sort the tremendous collection of sounds. So like everyone after a few months.

Samplism changes the sorting and tagging process as you only need to drop in your samples and the tool sorts the samples by assigned categories.  The found categories match the sounds almost everytime. As there was no metadata included the developer has really figured it out how to automatically sort sounds, beatsand loops.

Samplism features a breakthrough technology that automatically categorizes audio samples into tags.  By simply selecting a tag, all its corresponding samples will be shown in the Sample List. In addition, auto tags allow you to search for samples with more specific criteria.

When using the tool you experience the carefully designed Samplism which delivers the best performance and responsiveness you should expect. There is a slight slowdown based on the number of increased number of samples in the Samplism Library.

Samplism provides also an easy, swift and simple way to search for samples using tags and the applied auto tags. There other similar tools available what this tool makes a difference through the automatic tagging feature that can catalog your entire hard drive.

When using this tool with your DAW you need to drag and drop audio into your DAW.

Samplism is also compatible with Audio Units. Samplism scans all audio unit effects installed on your Mac and presents them in the Audio Unit List.

As you can see in the image above I did load during the test more and more sounds into the tool. Reaching more  1.4 Mio sounds the tools still worked fine.

In one of the next release, the product will add Files tab (v1.6) and the support of midi controllers as well as midi samples support.

The developer is listening to the customer community and if you do see great value from a missing feature I would let them know. Who knows it may get added to the product roadmap.  They exceedingly appreciate great suggestions from existing customers.

Samplism is a tool that every producer and professional who works with samples and sounds. The tool makes the loops production workflow easy. Samplism is really fast and appears to be optimized for managing large audio samples. The leading characteristic of Samplism is automatic tag matching which eases working with large volumes of samples. Samplism surpasses many existing tools.