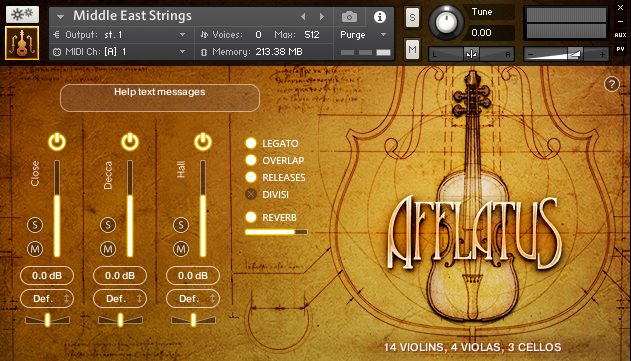 The string library market is always a little saturated, but strings are those special things many composers keep on collecting. It’s been a while since any kind of string library broke new ground, but with the arrival of Afflatus Strings by Strezov Sampling, the competition is about to be thoroughly schooled.

Strezov Sampling has been providing working composers with top class cinematic orchestral libraries for years – some of their more prominent libraries are the well-respected Wotan and Freyja choir libraries and the Thunder X3M cinematic percussion series.

Afflatus Strings ships with multiple string sections, from large to small, and an array of articulations recorded for their practicality of use. There are multiple mixed ensembles provided as well as individual violin 1, violin2, viola, celli and basses sections.

After purchasing the library, it can be downloaded from your Strezov Sampling account in parts, which you can then extract to your folder of choice. Then you must use the serial number you were given to register the library using the Native Access program. Point Native Access to your folder, and it’s installed for use with the free Kontakt Player.

Afflatus sounds amazingly rich yet detailed – this is a mixture of Sofia Session Studio’s acoustics and the well thought out choice of section sizes and instrument combinations. The smaller sections sound big enough to handle primary melodies, while the larger sections sound lush without being too masculine or pad-like.

There are multiple types of these sections, each with its own sound and style, which makes this library so useful across the board it’s like having a collection of different string libraries in one single package. There is emotive vibrato, silky flautando, con sordino straight out of the 70’s and bold marcato strokes from a 50 string ensemble.

There are stately shorts, aggressive shorts, poignant spiccatos leisurely tenutos. There are tickling pizzicatos, controlled tremolos, singing harmonics and gritty col . There are even trills up to an octave (!) that crossfade from regular sustains by holding whatever two keys you want within an octave. Being spoiled for choice never felt so overwhelming, as these are only a chunk of the sounds – experimental patches have also been provided – the strings were played alongside ethnic instruments, and even a short and long clusters patch is provided that allows you to create your own custom clusters. There is simply too much to cover here, so better to see and hear for yourself in the video below:

Of course, all of these wonderfully sounding sections would be useless if they didn’t function properly. Strezov Sampling has made certain that the scripting for Afflatus Strings is near-perfect. Each patch is simple and effortless to use, and the legato is smooth as butter and agile to boot. The functionality of this library is a second knockout punch, as the legatos are polyphonic, and there’s not a hung note or transition drop out in sight.

For the first time I was able to sit, play what I wanted and what I heard back was right on the money – a stellar combination of functioning as both a pad and a legato patch. The sections that provide divisi also don’t suffer from incorrect notes, as the divisi is activated with the pedal, making both polyphonic legato and divisi switching a wonderful reality and saving the working composer tons of time in the process. This library was certainly built for composers who need the sound and functionality to match their workload, and it delivers in spades.

When I first saw the price of Afflatus Strings on Strezov’s site, myself and many others’ reaction was shock-horror. But after whiling away the hours becoming lost in each patch’s imminent usefulness and unique character of sound, I knew – along with others – that this string library was going to ruin it for the other string libraries I own, including Spitfire’s Chamber Strings (sorry Sable, you’ve been a loyal friend). Whereas other string libraries are a collection of building blocks for writing, Afflatus Strings is a theme park where every ride is a patch from the library – and you’ll always find something in there that you’ve been needing for a long time.

Five out of five stars just isn’t enough for a milestone like this. The entire string game has been pulled apart and reconstructed, and I’m absolutely certain we’ll be seeing imitations from other sample providers in the near future, hoping to approach the high bar that Strezov Sampling has set for them all.