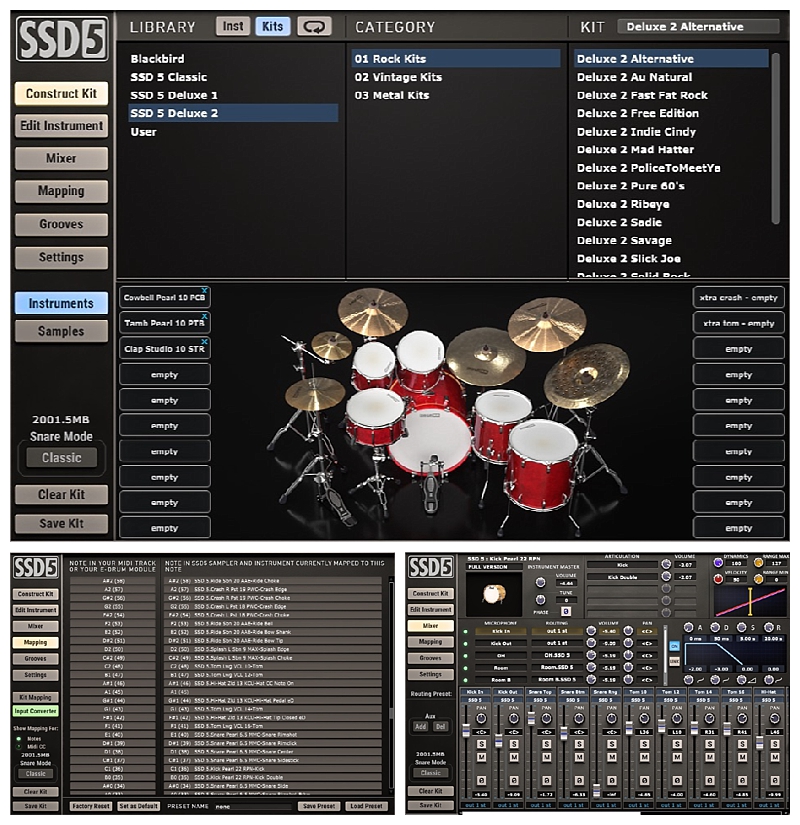 Yet another drum library hits the shelves. It would appear drum libraries are being packed with more and more content these days at more affordable prices – and Slate Drums 5 is no exception. But with more libraries and content, it’s becoming harder to impress customers. Let’s see how Slate Drums 5 fairs in that regard.

Steven Slate has been around for some time now, offering both mixing and mastering plugins as well as the widely used Slate Trigger plugin for drum layering and replacement.

Slate Drums was made as the playable VST plugin version of Trigger for those who prefer to use programs like EZDrummer or BFD for example. The latest of Slate Drums ships with all of the legacy content from Slate Drums 4 Platinum, plus a set of brand new kits and cymbals.

The Slate Drums library has always sounded great in its own way – while not exactly subtle enough to handle softer styles or funk, it’s great for rock, pop, metal and industrial – where it slices through with Steven Slate’s signature drum sound.

The legacy content (Classic Signature, Classics 1 & 2 and Deluxe 1) is all present here so anyone new to the library will be getting a ton of kicks, snares, toms and crisp cymbals to play with from square one.

The bonus for the previous user of Slate Drums is that through the magic of tone shaping algorithms, all of the old kits feel more responsive and more dynamic. They still have a coldness or “detached” feel about them due to not having controllable snare bleed for the kicks and toms, but they work just as well now in louder genres than they did initially.

The new kits, however (Deluxe 2) will be the most attractive reason for upgrading or buying a new copy. These kits do have a snare bleed channel for the kicks and toms, and it brings in that classic warmth and realism of a live drum sound. That, coupled with a nifty snare ring channel (which really emphasizes the snare overtones for a great ‘ping!’ sound) and more detail in the sampling, makes these kits perfect for blues, funk, jazz, indie and more.

This really pushes past the limitations Slate Drums once had, and the drums feel great to play. The drums are of course where this library truly excels, but there is an offset…

Those who like to custom map should steer well clear of this function and instead use the free NoteMapper plugin by CodeFN42 (it’s for Windows only though) to circumvent this problem and have everything working smoothly once more. The video below covers this workaround along with showcasing the library’s sounds, and includes links to the NoteMapper plugin and some logical presets to get you started:

Of course, it may seem like a deal breaker after reading about Slate Drums’ mapper-from-hell, but truth be told this is simply a great library with an awful mapper. Everything else is just fine, and with a separate mapping this becomes almost a moot point in the end.

The drums are provided with plenty of articulations and no less than 5 opening positions for the hats with both shank and tip variants, along with hard edge and medium shank hits for all the cymbals (I personally love these) along with choke keys. Each articulation’s volume can be tweaked, and the usual controls for shaping the velocity and decay are all there. The room mics are tops as well.

Steven Slate Drums 5 has a dated looking GUI it doesn’t get in the way of the sound, the editing functions, and the overall functionality.

The curse that plagues this library is the anti-user-friendly re-mapping system. Slate Drums 4 had it pretty bad – and Slate Drums 5 has it pretty bad too. There is no MIDI learn to function in the library, so you are forced to drag on articulations inside a rather clunky looking window – up, down, up, down and so on – which is bad enough in itself, but the two mapping functions (kit mapping and the core mapping function) reminded me of those two talking door-knockers in the movie “Labyrinth”. Neither of them to make sense, and neither of them to get along, and what’s left is an exasperating puzzle.

Attempting to create a custom map or simply moving something somewhere else for convenience, then trying to audition kit pieces, or worse – loading whole kits – results in a one step forward, three steps back dance.

Saving and loading different mapping presets with different kits is like hitting a button, and the only way to be sure a custom map will work is if you save the kit after mapping it… Every time you want to load new kit pieces or make a new kit.

I highly doubt Steven Slate was the behind this mapping script, but whoever is shouldn’t ever be making mapping scripts for any library (Steven, if you’re out there, please hire someone else to remake a mapping system for Slate Drums!).

After all of that, I still think Slate Drums 5 is a quality product (drum-wise) with a large legacy library and a tasty set of new drums that is priced well below what many others would (and do) charge.

Slate Drums 5 by STEVEN SLATE DRUMS doesn’t exactly knock it out of the park, but I wholeheartedly recommend upgrading or buying a copy, because at the end of the day it’s value for money with a great sound.