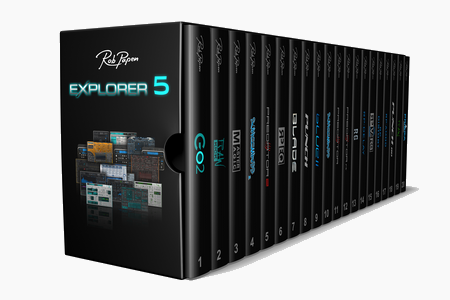 eXplorer5 by Rob Papen is a bundle of fabulous sounding synthesizers, and effects. We did review eXplorer4 bundle by Rob Papen Review in 2018. With the new fifth release, some new products have been added. Master Magic, RAW Kick, and Go2 have been included. As we did dive in more detail when we reviewed eXplorer4 this is more an updated look into the new bundle which still includes all the “Version 4” synths plus newly added ones. Rob Papen did send a review copy with no strings attached.

This inspirational eXplorer5 bundle includes 20 Rob Papen different products. eXplorer5 is for an owner of the eXplorer4 bundle a so-called no brainer upgrade. Rob Papen and team build up an extraordinary bundle of instruments and effects over the years. Compared to eXplorer4 the new eXplorer5 includes the earlier published Go2 (See our Go2 by Rob Papen Review), MasterMagic, and RAW-Kick.

The included products in eXplorer5 cover a magnificent range of Rob Papen Synths and FX tools. You receive in this bundle:

We did already did take a look at Go2 in our Go2 by Rob Papen Review. Another newly added synth is RAW-Kick. This Synth was developed in conjunction with DJ Free-K and DJ Promo. Based on the legendary RAW synthesizer, RAW-Kick includes neat features and focus specifically designed for today’s demanding producers! RAW-Kick offers three unique layers to create and build up your Kick drum sound, which is a common technique often applied by producers. But now, instead of using three separate products, you can use this approach within one product. Each layer offers two methods. You can select a dedicated kick synthesizer model or apply a sample-based layer.

The 5 is as the previous bundle (eXplorer4) is a marvelous set of Rob’s famous synths and effects. The extraordinary synths do sound exceptionally good. The total characteristic of the samples used is especially pristine and exciting. You get a lot of synthesizer plus some additional effect plugin and tools. Rob Papen’s virtual instrument bundle is a must buy.