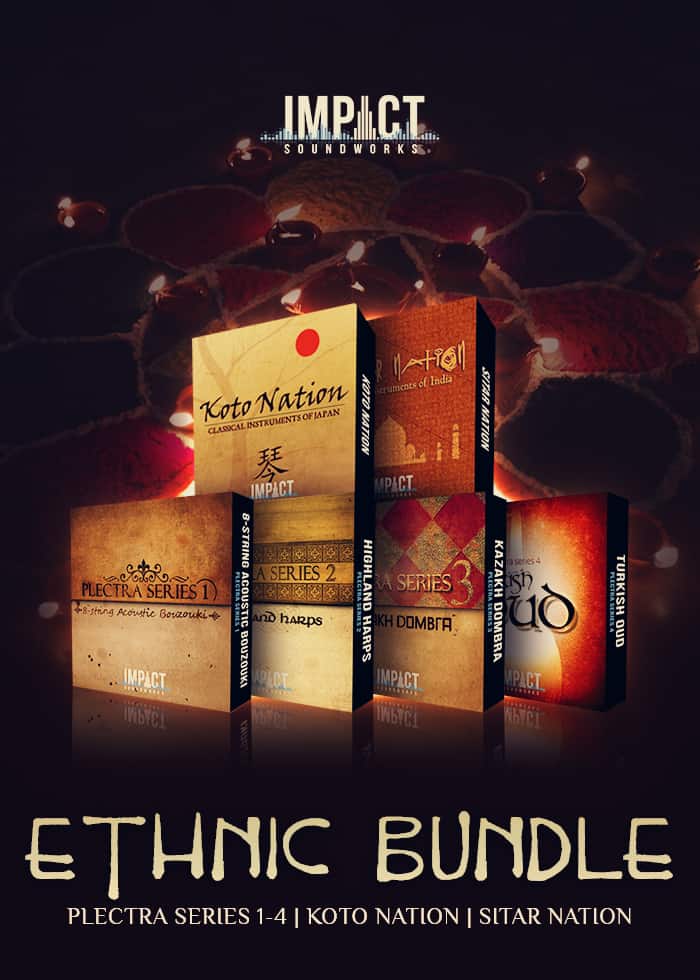 Music has always been a part of human culture, and instruments from all corners of the globe have played a role in its development.

From the Japanese shakuhachi to the Indian sitar, from the Greek bouzouki to the Kazakh dombra, each instrument has its own unique sound and history. In recent years, there has been a renewed interest in traditional music from around the world.

This has led to a new generation of musicians who are experimenting with sounds from different cultures. As a result, we are now able to enjoy a wider range of music than ever before.

Whether it’s the haunting sound of the shakuhachi or the lively rhythms of the bouzouki, there is an instrument from every corner of the world that can bring us joy.

The Impact Soundworks Ethnic Bundle is here! With this deal, you can get six real ethnic libraries for $99.99, a discount of 76% off the retail price. There are various gems among this compilation, offering instruments from corners of the globe, including Japan, India, Greece, Kazakhstan, European/Celtic, and Turkey.

This collection offers so much content. The library and producer are known for the authenticity of the sampled instruments. On top of that, you can leverage the instruments for sound design, including creating your own layered soundscapes and underscore elements.

While this collection focuses mostly on plucked instruments, they offer various playing styles from hammered to bowed, percussive slaps and noises, and effects like glissandi and short phrases.

This collection of plucked instruments offers a wide range of playing styles, from hammered to bow, and percussive slaps and noises. Each instrument has its own unique sound and can be played in a variety of ways.

All of these instruments are deeply sampled with multiple mic positions and articulations, 4 dynamic layers and 4 round robins per key, and offer authenticity and realism in each and every note or chord. This bundle is perfect for spicing up your palette and adding new sounds to traditional orchestral arrangements and cinematic underscore, ambient, pop, and all genres that would call for ethnic inspiration. You can also combine other ethical instruments like the EarthTone – Azerbaijani Tutek

In addition to the quality sampling you’d expect from Impact Soundworks, there are a ton of surprises tucked away in this bundle as well, so stop by the site and check it out!

INSANE DEAL! For just $99.99 (instead of $414 and Affiliate Link)), get Impact Soundworks’ Ethnic Instruments Bundle, a massive 15GB collection of world instruments that includes the following: Koto Nation: Classical Instruments of Japan. The Deal ends May 15th, 2019

Koto is a Japanese stringed musical instrument derived from the Chinese zheng and used to play a wide range of musical genres. The koto family includes the bass koto, the deepest koto, and the shamisen. The deepest koto is the largest and most powerful member of the family, with a deep, resonant tone that is perfect for playing along-form pieces.

With two microphone positions, extensive dynamics and round robins, traditional and contemporary articulations, and FX patches, this library is an essential tool for any composer or producer looking to add the unique sound of the koto to their music.

If you’re looking for the most comprehensive sitar, tambura, tabla, and baya library ever released, look no further! Impact Soundworks sampled every important playing technique and included multiple mic positions to give you the ultimate flexibility.

Also included are FX patches and MIDI grooves to help you add your own personal touch. Whether you’re a beginner or a seasoned pro, this library has everything you need to take your music to the next level!

The 8-string Acoustic Bouzouki is a beautifully crafted instrument that captures the essence of modern and traditional Greek music. The deep sampling and scripting provide a realistic and authentic experience, while the meticulous care and attention to detail ensure that each note is perfectly reproduced.

The result is an instrument that sounds and feels like the real thing, making it an essential addition to any musician’s arsenal. Whether you’re looking to add some depth to your recordings or simply want to experience the joy of playing this unique instrument, the 8-string Acoustic Bouzouki is sure to exceed your expectations.

The Impact Soundworks Lyre is a plucked folk instrument from America with a light, airy tone. It is perfect for Celtic and American folk music, and has been deeply sampled to capture all its nuances.

All three of these instruments have been recorded in high-quality audio, and come with a wide range of playable articulations. They are also very easy to use, thanks to the included Kontakt Player interface.

Whether you’re a seasoned folk musician or just getting started, these instruments are sure to bring a touch of magic to your music!

The Kazakhusky is a unique and beautiful instrument that has been played for centuries in Kazakhstan. It is a fretted lute with a bright, percussive tone that is perfect for adding rhythmic interest to any piece of music.

The instrument is chromatically sampled with up to 16x RR per note, meaning that it can reproduce any pitch with flawless accuracy. The Kazakhusky is also meticulously detailed, with each note being individually sampled to ensure the highest possible quality of sound.

Whether you are a professional musician or just a casual listener, the Kazakhusky is sure to impress.

The Oud is a stringed instrument with a long history and a unique sound. When you play the Oud, you want to be able to capture that authentic sound. With the new virtual Oud instrument, you can do just that. This instrument has all of the crucial articulations, a beautiful and inspiring UI, and a full micro tuning engine for authentic playing.

The result is an instrument that sounds realistic and detailed, making it perfect for any Oud player looking to add some new sounds to their arsenal. Whether you’re a beginner or a seasoned pro, the Plectra Series 4: Turkish Oud is sure to impress. So check it out today and add some new dimension to your playing!