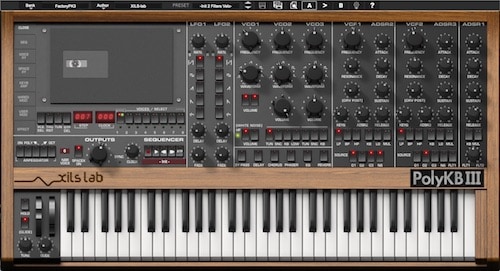 XILS-lab releases version 3.5 of the PolyKB III, which emulates the French legendary polyphonic analog synthesizer Polykobol II, and brings it to a new level of expressivity and musicality. This update is free for all PKB III users. If you wonder about the Kobol was used by Vince Clarke, Vangelis, Jean-Michel Jarre, Depeche Mode, Peter Gabriel, and Hans Zimmer.

PolyKB III v3.5 is an authentic-sounding simulation of the ultra-rare RSF Polykobol II ‘white whale’, albeit one on software steroids and now lifted to heightened levels of expressivity and musicality, thanks to several significant improvements over previous versions.

PolyKB III matchless modus operandi is its most revolutionary feature: free from aliasing, continuously-morphing oscillators. PolyKB III wants to be apart from the many ‘run-of-the-mill’ analog synth software re-creations readily out there since pushy PolyKB III programmers have instant access to hundreds of different analog-modeled waveforms — from triangle to pulse, through to sawtooth — via VCO1, VCO2, and VCO3, its flexible, free-running oscillators. On top of that, those oscillators can also be controlled by all modulation sources, so — unlike three-oscillator vintage analog hardware synths, such as the trailblazing Minimoog.

The end user experience of PolyKB III has also been updated, courtesy of the revamped GUI (Graphical User Interface) with reduced shadowing around the knobs to improve legibility of function wording, as well as redesigned tab selection and associated content. Not content with improving looks alone, a natural-sounding reverb now compliments already existing effects, ensuring PolyKB III always sounds as good as it looks!