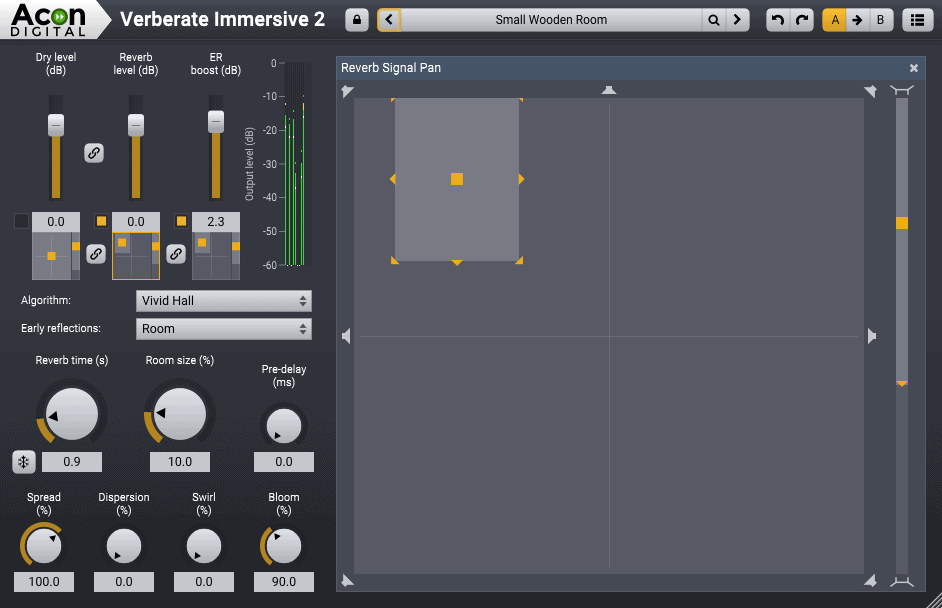 Verberate Immersive 2 was developed in close cooperation with professionals in film and TV post-production. Great efforts were made to create a tool that not only delivers the best-in-class audio quality but also delivers results quickly through a well thought out workflow. Verberate Immersive 2 offers complete and independent control over the panning of the dry sound, late reverberation, and early reflections. The panners work in up to three dimensions and have adjustable divergence. The pan positions and divergences are visualized and adjusted in an intuitive way, thus simplifying the automation of complex movements.

Verberate Immersive 2 offers complete and independent control over the panning of the dry sound, late reverberation and early reflections. The panners work in up to three dimensions and have adjustable divergence. The pan positions and divergences are visualized and adjusted in an intuitive way, thus simplifying automation of complex movements.

The decay editor that makes it possible to sculpt the reverb tails by setting up frequency dependent reverb times has been significantly improved. It now offers bell as well as high and low cut and shelving filters similar to a parametric equalizer. The filter slopes can be adjusted continuously as with most Acon Digital plug-ins. The integrated input and output equalizers offer the same filter types and both the decay editor and the equalizers show accurate curves with interactive handles to modify the filter band settings.

A large catalog of beautiful factory presets is delivered with Verberate Immersive 2 and a clear and straightforward graphical user interface simplifies the search for a specific reverb sound. Verberate Immersive 2 was released today and is available in the Acon Digital Store for $199.90 USD, however a 25% early bird discount is offered until June 15th. Owners of the stereo version can upgrade for $99.90 USD.