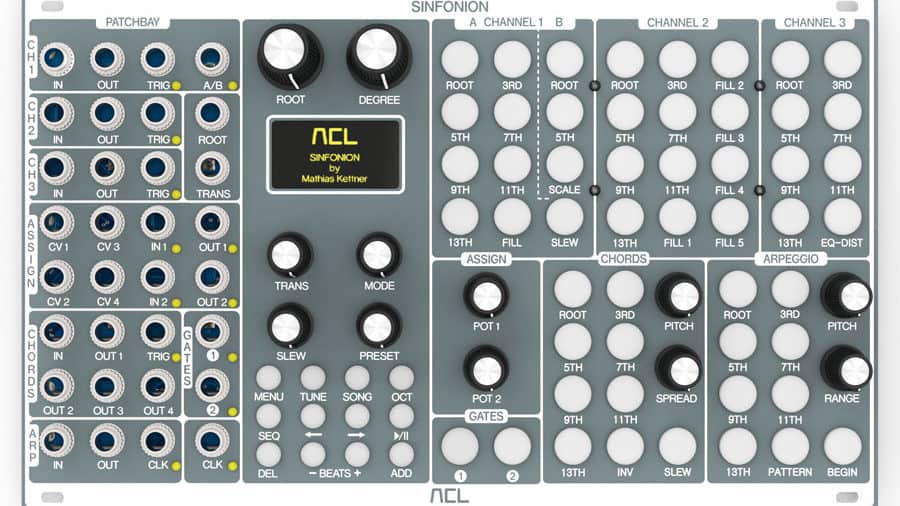 Unleash the power of your modular system with the Sinfonion. Not only is the Sinfonion the most complex and versatile quantizer, chord generator and arpeggiator in Eurorack format, it is also a very musical module and fun to use. It has been designed and programmed by Mathias Kettner and is produced by Audiophile Circuits League in Berlin.

The Sinfonion is designed for those musicians that do not want to be limited to creating “sound sculptures” or rhythmic grooves with their modular instruments but want all their fabulous VCOs and other voices to play together in the most musical and polyphonic way – may it be harmonic or even disharmonic on purpose. The Sinfonion comprises of three independent quantizer channels, a four-note chord generator, an arpeggiator and a complex progression sequencer in one. Thanks to a vast array of buttons and knobs placed around a sharp OLED display, it is easy to use and come up with musical ideas.

Sinfonion a control center of your modular system

With a total of 8 pitch outputs, 4 gate outputs, 11 CV inputs, and 9 gate inputs, it offers a large number of controls. Its plethora of buttons makes it an actual instrument you can play. Furthermore, the Sinfonion features an expansion port to add modules and expand functionality in the future. The three quantizer channels provide direct access to harmonic scale notes via dedicated buttons per channel (Root, 3rd, 5th, 7th, 9th, 11th, 13th). The buttons are made for jamming, controlling the sequences on the go. A fast processor allows quantization times below 1ms.

A chord section generates four pitch outputs, allowing to create four-voiced chords. It offers a lot of options directly accessible from the front panel. Thanks to dedicated knobs for pitch and spread, buttons for selecting the notes chord inversion and optional slew, you can get the chord you are looking for in no time. The arpeggiator section features 8 different patterns, dedicated knobs for pitch and range, and an array of buttons for selecting the scale notes and the pattern (Up, Down, Up/Down, Down/Up, Baroque, Octaves, Brownian, Random).

All these sections are under control of the Chord Progression Sequencer. It is the brain of the Sinfonion and is operated easily thanks to the display. You can change the root, degree, and mode by simply turning the according to knobs. It enables the creation of 16 songs with 4 parts each, and 32 steps per part. This comprises the sequencing of chord voicings, octave switches, and scale note selections.