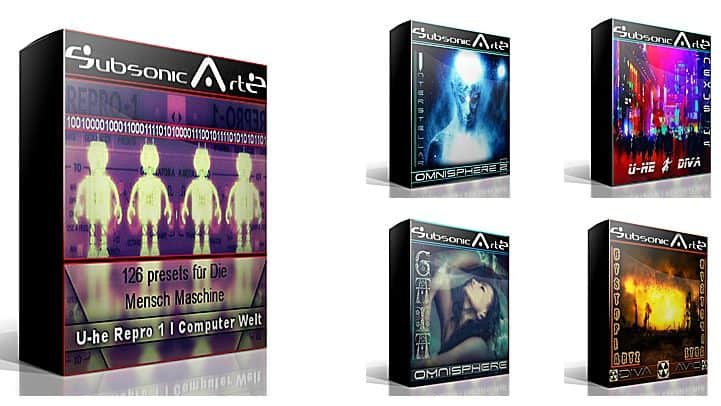 Subsonic Art is Fred Nongat, who is a very creative, innovative and inspiring sound designer. SubsonicArtz soundsets are now available at Triple Spiral Audio. SubsonicArtz is Fred Nongat, a passionate independent self-made sound designer and musician who was born in this beautiful world that everyone around is used to call Earth. Fred is definitively sorry for all those good folks who were absolutely sure that he was an Alien escaped from the Nostromo.

To the most, Fred admits that he sometimes asks himself if he ain’t got an Alien inside of his mind. Fred Nongat from Subsonic Artz and Jaap Visser from Triple Spiral Audio have enjoyed working together on their soundset for Diva, Beyond the Illusion and they will release soon as well a new soundset for Repro 1+5. Both have big plans for the future and decided to join forces and from this day on the soundsets from Subsonic Artz are now available at Triple Spiral Audio as well.

DystopiArtz is designed to bring you an instant post-apocalyptic and dark science fiction ambiances. It’ll bring the desolate, gritty, sinister, dissonant or even melancholic feel you were looking for your movie or your game scores. But of course, DystopiArtz can also be used for other styles like EDM, Gothic music.

First of all, and as you sure might have guessed, INTERSTELLAR library intends to pay homage to Christopher NOLAN’s movie which was, according to me, really fantastic. Some of its central themes like Trust in each other, Faith in the future of humanity, Love across Dimensions have to be really cherished. Secondly, after the previous library called ‘GAIA’, it seemed to me that this title and the type of sounds and concepts that it provides would bring the whole thing to a cohesive ensemble. Last but not least, Interstellar soundset was the perfect opportunity to develop a full palette of sonic space ambiances, SFX and deep drones, aliens sounds, robotic vocals, cinematic pulses, dreamy and spiritual textures, and ethereal angelic voices of the cosmos.

GAIA is aimed at the ambient, organic, wonderful atmospheric kind of sounds with a delicate celestial touch. Enigma and Enya or new age music fans will love them.

BEYOND THE ILLUSION – DIVA SOUNDSET

Beyond the Illusion contains 128 patches and a few bonus patches. The soundset is filled with soft, sad and melancholic sounds to see the beauty beyond the darkness. Fred Nongat has found his inspiration to create this soundset from the life around us and from some of our intimate experiences. We wanted to create sounds with a soft, mysterious and mystique character that contains a deep emotional value.

It’s quite simple to guess that COMPUTER WELT was built with a clear purpose in mind: To get as close as possible to the Kraftwerk’s sound DNA. As a big fan of the famous band of Düsseldorf (and also of some other Krautrock’s bands like Tangerine Dream…) , Fredi found this idea of building a dedicated bank really really exciting. To bring this unique project to life (to his knowledge, no other bank of this kind has been done for a Vst, except the Synth-Werk from Best Service but this one is a sample library) , he decided to use the Repro-1 Vst cause Fred Nongat was really astounded by its sounds and its features (especially the integrated sequencer).

Acustica Audio Honey3 is all about vintage American console sounds