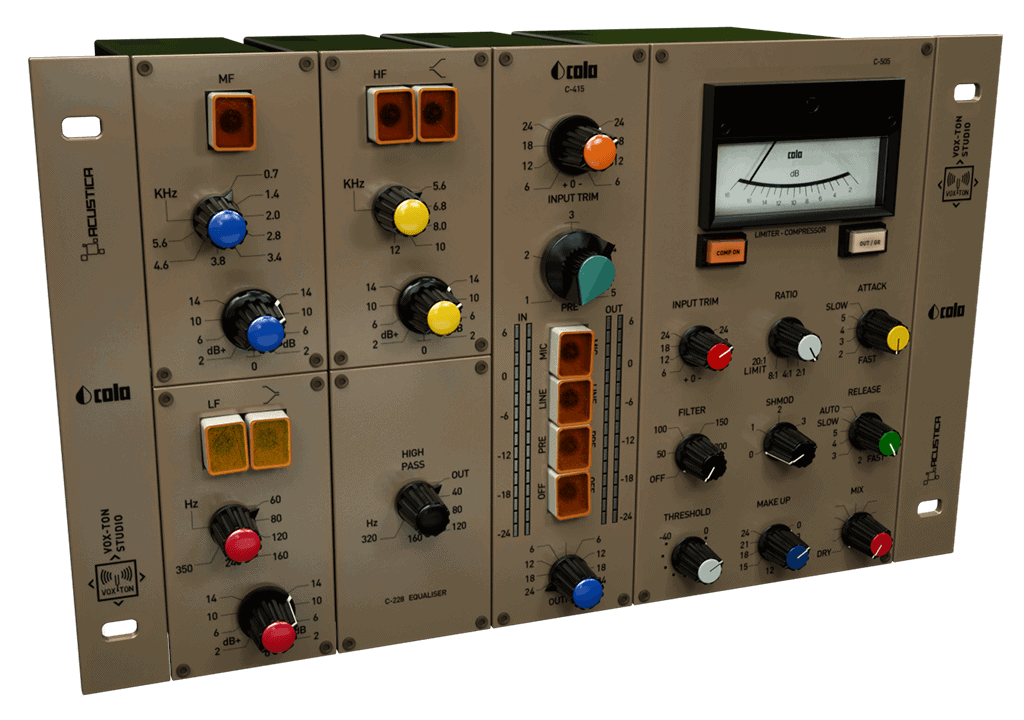 The centerpiece of this plugin suite is a beautiful emulation of a rare vintage British console from 1972, used to shape the immortal sound of iconic albums by AC/DC, Queen, Clash, Sex Pistols and many more. Acustica’s emulation embodies the character and the performance of this sensuous brute – a fully discrete, class A console with mastering grade inductor Eq’s on each channel and a 44-Volt audio power supply that gives it a smooth and clear sound with big and solid bass, low noise and lots of headroom.

In the mix with Cola is:

With Cola, Acustica has launched a first-of-its-kind in AI-based methods for mixing. Unlike other companies, who classify audio content (violins, drums, vocals, etc.) with the aim of implementing an auto-mix functionality of the software, Acustica has adopted a radically distinct approach.

They decided to ‘sample’ the engineer and his or her approach to working on a track. Every mixing move is learned by the plugin based on both the audio material and the personal preference of the engineer using it. This is achieved using a method based on Deep Learning technology, which allows Acustica to literally teach the plugin the ‘secret moves’ of a pro. This is all about the style and unique creative approach of every great engineer and not about creating fixed ‘presets’. This means the plugin will react differently according to what it ‘hears’, based on what it has learned from the engineer who has used it.

For Cola, the developer sat down with Vox-Ton’s head engineer Francesco Donadello, and let him use it on some orchestral recordings, whereas Acustica had some fun on the subgroups of some of their mixes. They taught Cola how the team does things and what they want to hear in a mix. Most adjustments were subtle as the material was already pretty balanced but Acustica Audio will definitely try a more aggressive approach to these ‘lessons’ in the future.

This new tech might not ‘immediately’ give you the best results – your approach could in fact be the opposite of what some engineers like to do – but it will certainly give you a new perspective on how different people mix the same material.

Of course, this new technology is still in its infancy, Acustica is still working on it, but the first results are very promising indeed. Stay tuned for more.