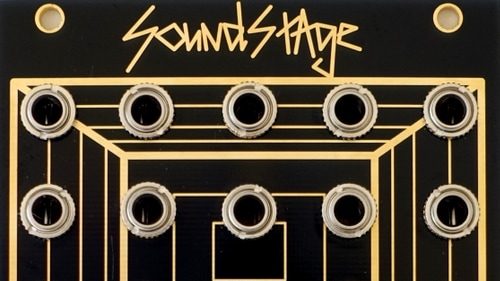 WORNG Electronics launched a new Eurorack Module. The SoundStage Module is a very unique stereo mixer. Entirely reimagining what a mixer needs to be in a Eurorack system. SoundStage helps you build your mix just by patching your voices in.

The ideas behind the SoundStage have been developing for a few years. The founder of WORNG Electronics Morgan McWaters worked for many years as a sound engineer. He learned a lot of tricks for getting sounds to fit together in a mix. Morgan learned through experience panning is a powerful tool for separating instruments in a mix. Furthermore filtering instruments to they sit in their own space in the frequency spectrum.

Depth of filtering and output level have dedicated controls and bipolar CV inputs. Allowing creative uses such as sidechain compression and rhythmic filtering. The twenty-one individual inputs forgo level controls as this can be controlled at the VCA stage of each voice. The static stereo pan positions are chosen so the stereo image is wider for higher frequency voices. Giving your mix solidity in the low end and width in the highs.

Panning in SoundStage is simple. If you patch in on the left-hand side of the module your sound will be panned to the left. Similarly patching in on the right pans right. However, no sounds are hard panned. Even if patched to a far outside input the signal will appear panned slightly between the speakers to create a more natural soundscape.

The SoundStage filters are inspired by a few things. First off by the SP-1200 voice filters mentioned previously being one of them. And also the way a guitar or bass amp shapes the spectrum of the signal being fed into it in a way which lets them sit together in a mix in a natural way. Lastly the old mix trick of using EQ during mixdown to remove parts of the spectrum of some sounds to leave room for others to occupy, for example using an HPF on all drums apart from the kick so that the kick has all that low frequency to itself. Likewise, the technique of EQing the kick drum and bassline so that each has a cut where the other’s fundamental frequency sits.

The “standard” use for SoundStage is as a spectral stereo mixer to give your voices their own position in the stereo field and also in the frequency spectrum. Patch your voices in depending on where you’d like them to be panned from left to right, and where you’d like them to sit in the frequency spectrum from Low to High. Once you’re patched in, adjust the output level control so you’ve got a good level to feed the next stage of your signal path, then adjust the filter depth so that it sounds good to you.