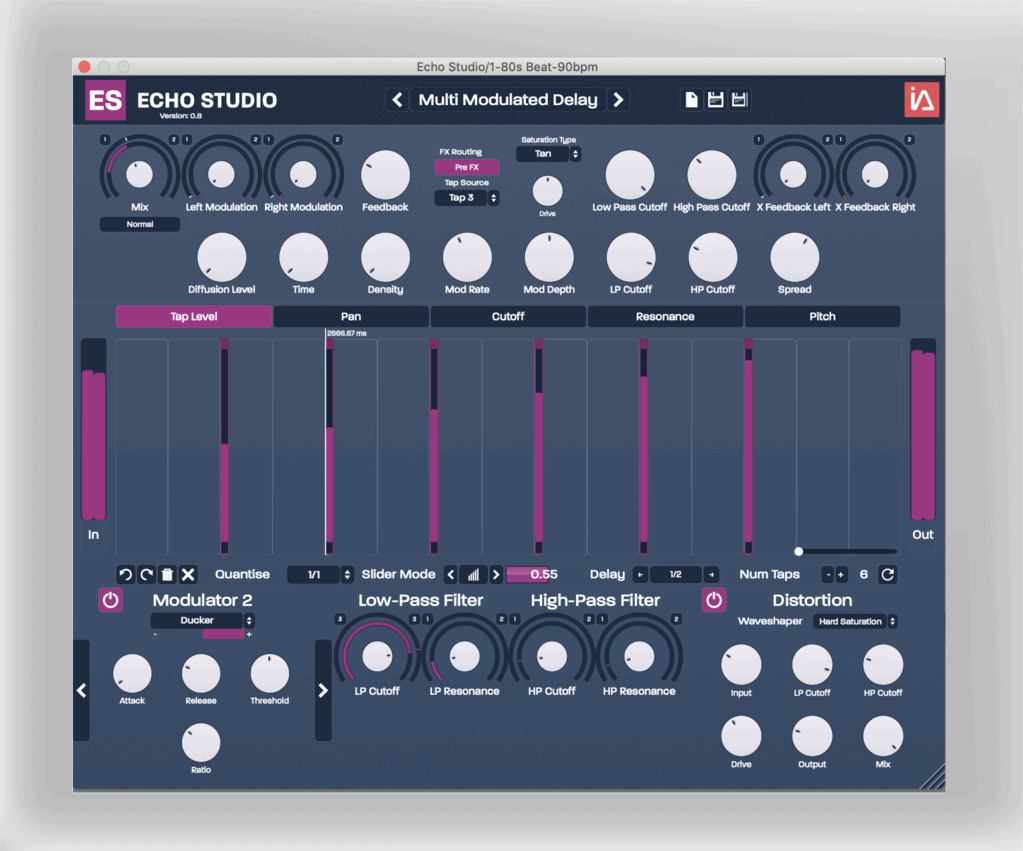 Intuitive Audio introduced their latest product Echo Studio. Echo Studio is a powerful and versatile Multi-Tap Delay plugin, which allows you to use up to 32 taps to create delays for your tracks. Each Delay Tap also has its separate FX Chain, which allows you to control the Gain, Panning, Low Pass and High Pass Filtering, Resonance and Pitch of your delays. Echo Studio also has extensive Global Effect Functionality, including a separate Feedback FX Chain, Distortion Engine, Diffusion, and an intuitive Modulation Framework and a Reverse Delay Mode.

Multi-Tap Delay is an effect which allows you to break up a delayed signal into multiple sections to create repeated echoes. Traditionally, Multi-Tap Delay plugins allow you to set the overall delay time, and add taps at fixed intervals in between this delay time (1/2 notes, etc.) Echo Studio allows you to set the delay time for each delay tap, so you can create a fully customized rhythm for your delays. You can also control the tone of each delay using each Delay Tap’s FX Chain, providing you with boundless creative options for creating delay effects.

Delay Circuits allow you to take a portion of the Delayed Output a write it back into the system again to created additional repetitions. This is known as feedback and creates the echoing effect associated with Delay Plugins. Echo Studio has an extensive Feedback section, which allows you to choose the source of the Feedback, apply Waveshaping and Distortion as well filtering with a Low Pass and/or High Pass Filter. You can also control the Stereo Imaging using the Cross Feedback control. Cross Feedback allows you to control how much feedback is written across different channels. For example, setting the Cross Feedback L to 100% will result in all feedback from the left channel being written into the right channels. You can also modulate these settings to create Ping Pong Feedback echo effects.

Echo Studio also has a Diffusion Section, which allows you to create Reverbs using your delays. There is also a Distortion Engine, Global Filtering and an Intuitive Modulation framework which allows you to use LFOs, Duckers of ADSR Envelopes to modulate effects. You can modulate the Delay Times to create Chorus are Tape Delay Effects, or use the Ducker or ADSR Envelopes to modulate either the Mix or Global Filters to duck the delay around audio.

TRY BEFORE YOU BUY

The Demo provides you with full access to the Delay Plugin functionality for 15 days, try the Demo before you purchase a full license.  With this much potential for creating delayed soundscapes, Echo Studio is a key plugin for any sound designer, producer, and composer.