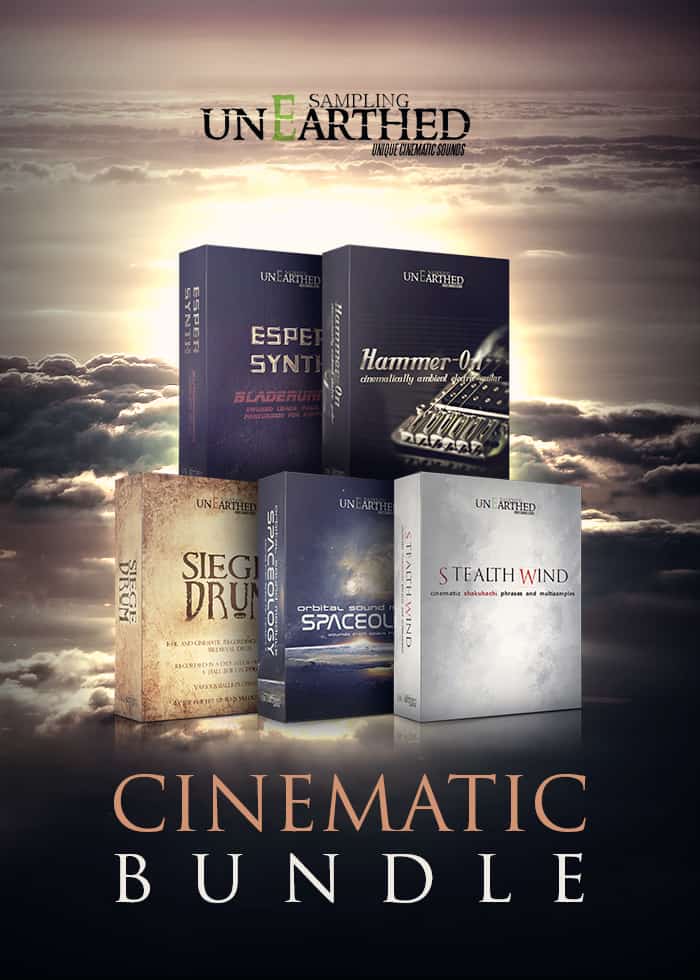 unEarthed Sampling creates extremely cinematic instruments that are playable. Right out of the box with very little tweaking which is not all that expensive.

Built for the full retail version of Kontakt. These sounds are a wellspring of inspiration and will become an instant go-to for your next projects. This bundle is normally valued at $138 but will be available for just $25.99 (Affiliate Link) for a limited time only (80% off).

unEarthed Sampling’s Cinematic Bundle featuring 5 of their finest libraries. unEarthed Sampling creates extremely cinematic instruments. They are playable right out of the box with very little tweaking which is not all that expensive

Built for the full retail version of Kontakt. Tese sounds are a wellspring of inspiration and will become an instant go-to for your next projects.

Originally $138, this bundle is now available for just $25.99 (Affiliate Link) for a limited time only – you save $112! This is an amazing offer you should not miss!

All Audio Plugin Deals Affiliate income will be donated to Kevin Richardson Wildlife Sanctuary. The Kevin Richardson Wildlife Sanctuary’s mission is to provide a self-sustaining African carnivore sanctuary for the purposes of wild species preservation through education, awareness, and funding, especially pertaining to the rapid decline of large carnivores in Africa due to habitat loss, human-predator conflict, the illegal bushmeat trade, unscrupulous hunting, disease, and their illegal trade.

The Kevin Richardson Wildlife Sanctuary transforms the way humans think, interact and behave toward the keeping of large carnivores. The sanctuary’s ultimate goal is to minimize the number of large carnivores being kept in captivity and to highlight the direct link between the cub petting industry and the ‘canned’ hunting industry, by educating the unsuspecting public to the horrors associated with this unscrupulous practice. Ultimately we would like to see both practices outlawed. The sanctuary aims to maximize efforts towards keeping carnivores in their natural habitats and is currently home not only to lion, but spotted hyena, striped hyena, and black leopard.

The lion population occupies less than 20% of its former range in Africa. Numbers are estimated between 15 000 and 30 000 depending on who is asked. More recently scientists have started to settle on a number of 20 000 however more research is needed into the actual numbers. If allowed to carry on declining at the current rate we will have no lions left in the wildlife in as little as 20 years.

Our vision is to raise awareness about the plight of lions and other carnivores in the wildlife and help prevent their habitat loss via human encroachment and conflict (revenge killing), unscrupulous hunting and illegal trade. The sanctuary’s efforts are buttressed by its many collaborative efforts with other like-minded international organizations that provide care, support, academic and scientific research and other such programs that support the shared values of the sanctuary.

The sanctuary provides the animals in its care the ability to live out full lives, in an open and natural environment, by providing cutting edge enrichment programs and health care. Education of both adults and children are at the bedrock of how the sanctuary aims to accomplish its goals via documentaries, films, social media, and tourism.