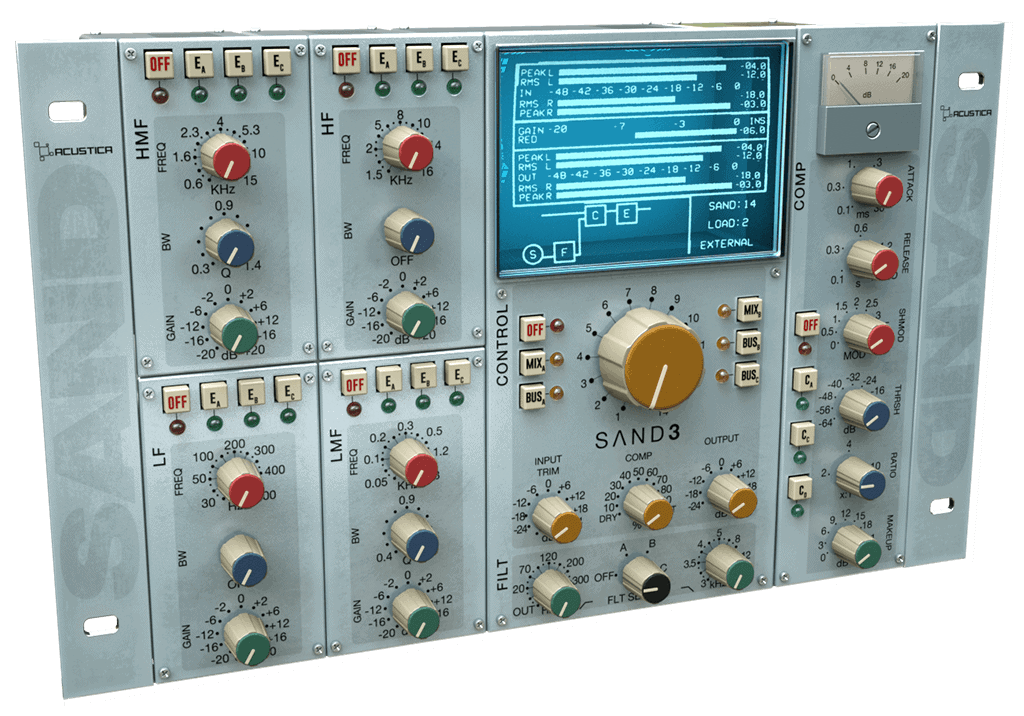 SAND3 is the audio industry’s biggest, most complete, insanely powerful and true-to-the-originals plugin suite, created to give you the ultimate record-ready tone in the box. In addition to a fully replicated channel strip, SAND3 includes 3 EQ modules, a compressor inspired by 3 different British units, and a preamp module, for a total of 6 plugins.

SAND3 is a VST/AAX/AU plug-in suite which reproduces the sonic behavior of a series of high-end British consoles which literally dominated the Pop and Rock scene from the ’80s onward.

With the SAND3 suite, Acustica Audio has faithfully recreated the sound characteristics of classic British high-end mixing consoles and recording studio hardware. It includes a powerful channel-strip featuring a combination of many devices into a single plugin, characterized by unique color with incredible new features. First of all let us briefly look at some of the plugin’s key features before moving on to its specific controls.

Sound engineers from all over the world swear by their forward, slightly ‘aggressive’ sound as well as their logical layout. Last but not least, SAND3 packs the experience of 7 renowned engineers, who have been directly involved in the development of dedicated AI presets, ready for use.

SAND3 is equipped with different multivariable meters for the INPUT and OUTPUT stages including VU, Peak, True Peak, LUFS, K12, K14 and more. Acustica Audio did this to give you the utmost in level reference during mixing.

The SAND3 Channel-strip is equipped with five different smooth and clean preamps sampled from different consoles to give you a complete preamp section. All preamps are STEREO except for BUS C. The description provided below is only intended as a guide, not a restriction.

MIX = These preamps were sampled directly from a channel-strip of the consoles (LINE-IN). They don’t include the color of the original compressor modeled here.

BUS = Designed as a Bus emulation with pronounced time-domain distortion.

A mode: A Mic pre that offers accurate transient reproduction (and has the best sounding and most transparent VCAs in the channels). It’s an excellent choice if you are looking for a cleaner sounding mic pre for vocals.

In SAND3 Acustica Audio introduced 2 extra EQ modules to give you even more tonal-shaping possibilities. SAND3 +E EQ is derived from a console which changed the face of mixing forever, whereas SAND3 +G EQ is derived from another revered British console which was introduced on the market in 1993. It features a switchable 4-band parametric equalizer with a preamp section and an additional high and low-pass filter set. Find out more in the user manual.

Comp A is an emulation of a VCA stereo unit. It’s a bus compressor and captures the unique British sound of one of the best mixing consoles from the ‘80s. Acustica Audio chose to sample the best hardware out there to give you a perfect solution.

Comp C is the result of careful research and improvements to have a dynamic processor characterized by accuracy and versatility. The attack times of this dynamic range compressor are close to some other familiar software compressors.

It reigns supreme for ‘glue’ purposes! Acustica Audio believe they are delivering a sublime plugin that “does both transparency and glue with panache, making a mix louder and punchier while imparting an expensive, modern-sounding cohesiveness that has probably shaped the sound of more hit records than any other over the past three decades”.

Comp D mode is the result of the faithful sampling of a line channel compressor derived from one of the most famous British consoles introduced for the first time into the market in 1987.

It’s equipped with a relatively small number of controls and parameters but this thing does not affect the sound, so your mix can be drastically changed in a more or less soft way, it’s up to you to decide if you want either gentle or heavy compression! Ratio 2:1 makes the compressor more transparent, while with 5:1 you feel its influence more.20:1 is used when the compressor is to be made more aggressive and punchy.

Sand is currently available at early access pricing – €199 €59 – Save 70% OFF. Early-access / Crazy-access pricings are introductory, time-limited discount periods during which the plugin may be subject to further refinements and minor updates, for better performance and extended compatibility.