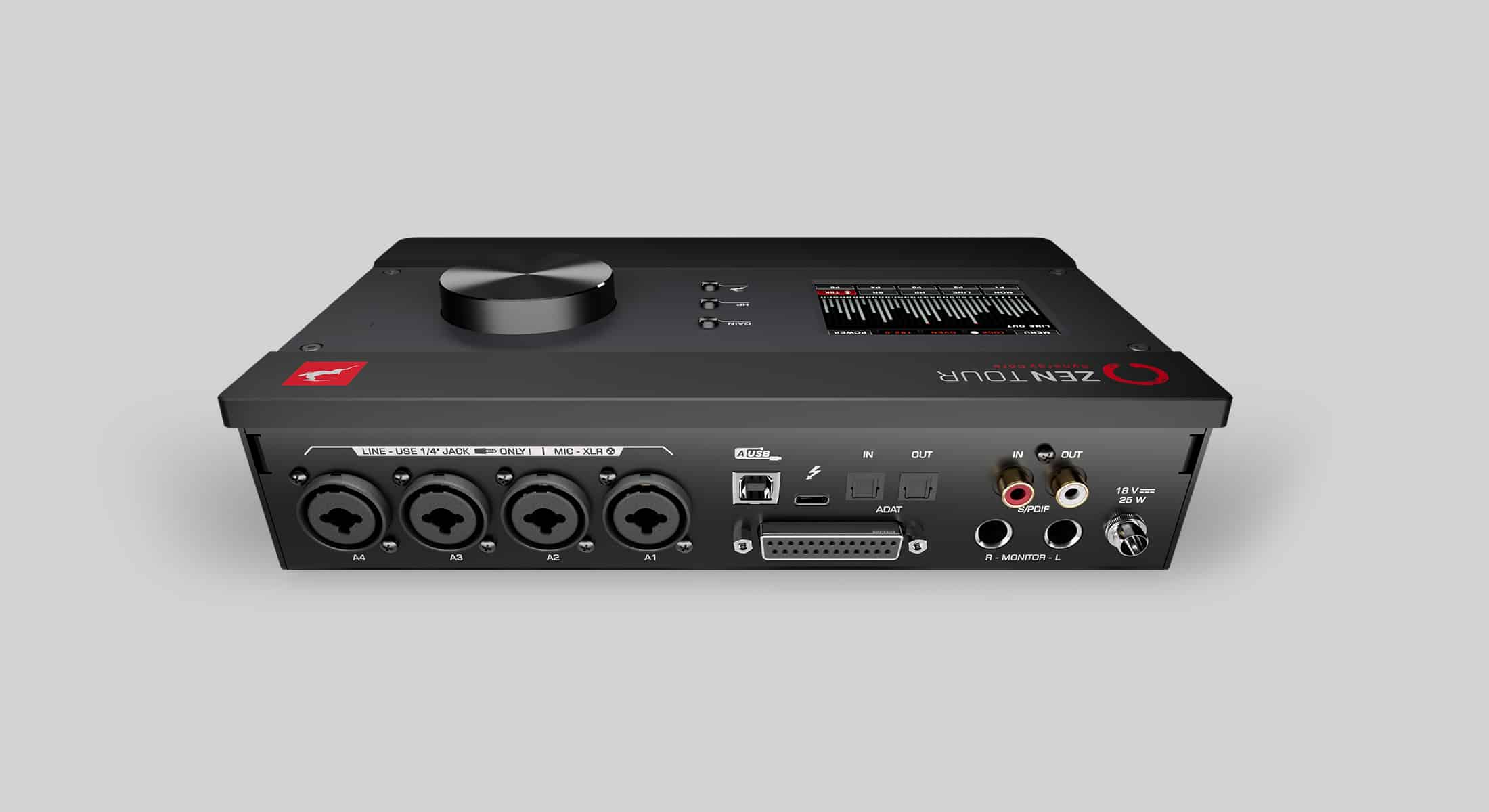 Antelope Audio is proud to introduce Zen Tour Synergy Core. With this unit the company is pushing portable audio interface design further forward as a cross-platform (TB3/USB2 for Mac/Win) 18×24 offering that can process up to 256 effects over 32 channels with ultra-low latency and zero CPU drain (thanks to the four ARM-based DSP processors. To which it owes its extended family name, working with the doubled custom-designed FPGA chip architecture of its popular predecessor) for artifact-free recording and mixing with confidence (courtesy of Antelope Audio’s always-competitive specs, including 130dB DA conversion on its monitor outs for an unrivaled critical listening experience).

Giving your projects a flying start, Zen Tour Synergy Core includes a compelling library of 36 meticulously modeled real-time studio effects. It’s all happening inside your audio interface with the lowest possible latency – thanks to FPGA’s massive parallel computing capabilities, DSP processing, and fast Thunderbolt™ connectivity. The included library can be expanded to include any effects you choose from our web store.

Owners of Zen Tour Synergy Core can choose from a wider variety of DSP-based effects that are available exclusively from Antelope Audio, such as a custom-designed plug-in that leverages the next-generation hardware acceleration of the Synergy Core platform to deliver the legendary Auto-Tune® pitch correction and vocal effects with ultra-low latency (Auto-Tune Synergy); a fresh and versatile take on vintage tremolos (Vari-Speed Tremolo); phases, sweeps, and swooshes that sound truly out of this world (Space Flanger); and much more besides. Better still, users can creatively process up to 32 mono DAW channels via Zen Tour Synergy Core as hardware inserts or place 32 Synergy Core-powered effects racks as plug-ins via Antelope Audio’s AFX2DAW bridge, bringing DSP- and FPGA-based effects modeling to any DAW!

As a portable desktop device that can comfortably fit into a backpack, Zen Tour Synergy Core’s comprehensive I/O is impressive. In terms of its 8×14 analog I/O implementation, it can record four acoustic sources using microphones (via four mic/line inputs on TRS/XLR Combo jacks) and four electric guitars or eight mono/ four stereo synthesizers simultaneously (by also utilizing four instrument/line inputs on TRS). Ultimately, users can process up to eight mono channels through outboard gear (via a standard 25-pin D-SUB connector) and record them back into DAW projects.
Connectivity continues with two monitor outs on TRS, two headphone outs on TRS, and two re-amp outs on TRS. The 10×10 implementation of digital I/O via ADAT and SPDIF allows for extending that already-impressive analog I/O implementation with external line/mic convertors for plugging into external digital processing units without AD/DA conversion. Correspondingly, ADAT (SMUX) supported channel count varies — between eight inputs and outputs at 44.1/48 kHz, four inputs and outputs at 88.2/96 kHz, and two inputs and outputs at 176.4/192 kHz — while the SPDIF-supported channel count totals two inputs and two outputs at 44.1-192 kHz.

As a Thunderbolt 3- and USB 2-equipped cross-platform audio interface that is compatible with both macOS — Catalina included — and Windows, Zen Tour Synergy Core really represents a sound investment for any audio engineer, even if subsequently choosing to change their computer system. Since it utilizes high-performance, custom-built drivers, Zen Tour Synergy Core can achieve ultra-low round trip latency for direct monitoring with effects.

So, simply speaking, Zen Tour Synergy Core comes up trumps when it comes to duly delivering enhanced effects processing capabilities and improved AD/DA as a perfect portable fit for project studio owners as well as on-the-move producers and audio engineers who use audio effects to process recording and mixing sessions while seeking extensive analog connectivity in a compact form factor.

For those seeking to musically meditate on pushing portable audio interface innovation, why not experience all that Zen Tour Synergy Core has to offer when it is introduced by Antelope Audio on Booth 15912 at The 2020 NAMM Show, January 16-19, Anaheim, CA, USA? Ultimately, visitors welcomed will surely be impressed with what they see and hear there!

Zen Tour Synergy Core will be shipping in Q1 2020 — at a projected price of $1995.00 USD/€1995.00 EUR — and available through Antelope Audio’s growing global network of authorized dealers. Or order online directly from Antelope Audio.