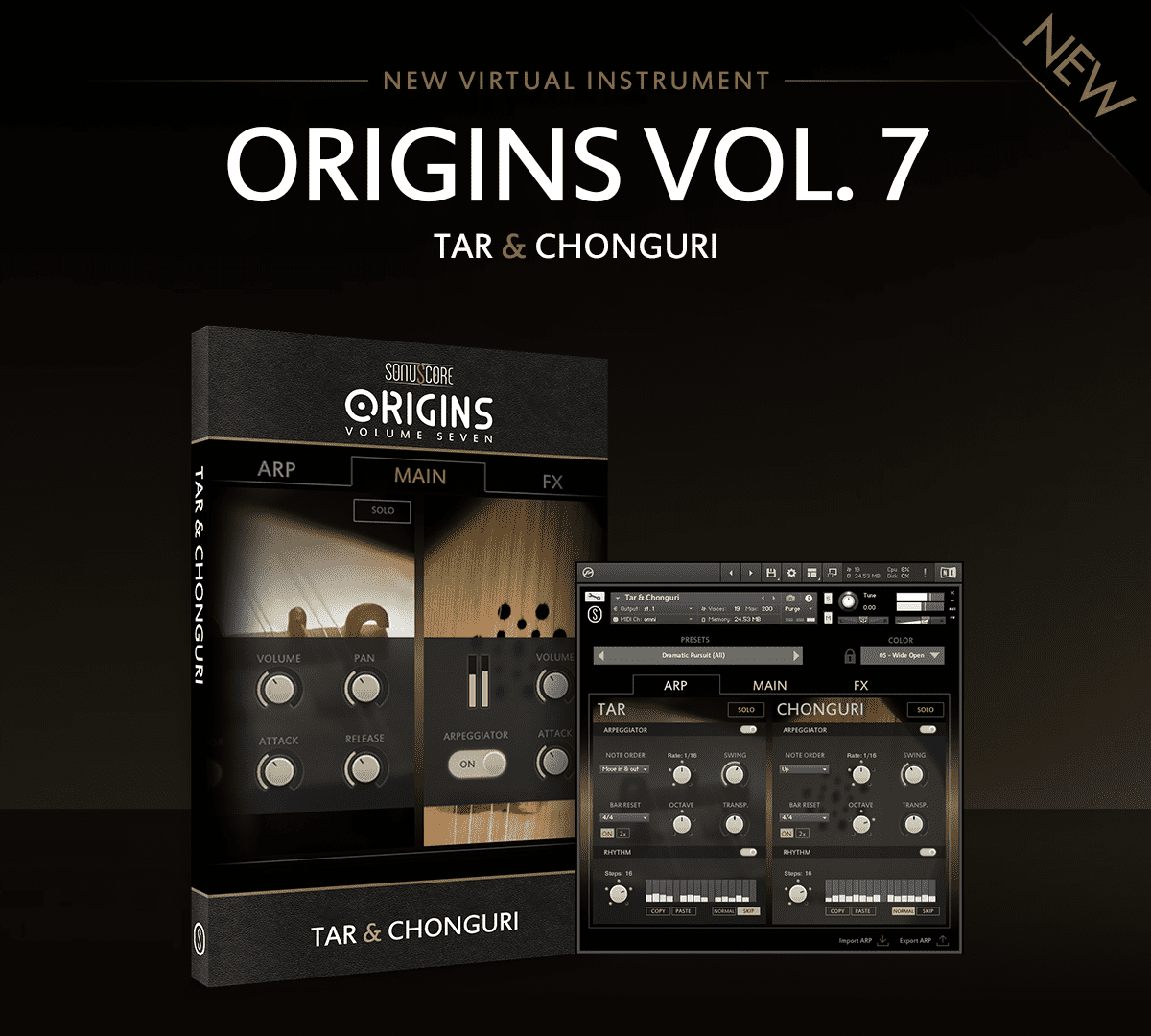 The Tar and the Chonguri are two of the most popular string instruments in the East. The Tar is a long-necked, fretted lute, while the Chonguri is a small, four-stringed instrument.

Both instruments are used in traditional and folk music and have a unique sound that is instantly recognizable. The Tar has a deep, mellow tone, while the Chonguri has a higher, more nasal sound. Both instruments are played with a pick, and use a variety of techniques, including plucking, strumming, and bowing.

The Tar and the Chonguri are both essential parts of Eastern music and are sure to delight any listener.

Tar and Chonguri are two incredibly beautiful eastern string instruments. United, they form the perfect couple for Sonuscore new Origins Vol. 7. Both are amazingly complementing each other’s tonal colors and allow a huge variety of timbres. Perform magnificent soundscapes with their Multi-Arpeggio-Designer or play the instruments solo.

The newly released Origins Vol. 7: Tar & Chonguri from SONUSCORE is a versatile and inspiring tool for any musician looking for instant sonic gratification. The presets are top-notch, and the COLOR menu makes finding the perfect sound easy. Tar and Chonguri are traditional musical instruments from the Caucasus region of Eurasia.

The collection includes deeply sampled Tar and Chonburi played by some of the world’s most skilled performers. The result is a wide range of unique and expressive sounds that will add flavor to any composition.

These beautiful and evocative sounds are perfect for use in film, TV, games, or any other music production. Whether you’re looking for instant inspiration or a new way to add depth to your existing sound palette, Origins Vol. 7: Tar & Chongurl is an essential tool for any creative musician.

The Tar is a Persian stringed instrument that has been around for centuries. It is typically made of wood, with a bowl-shaped body and a long neck. The strings are made of steel, and they are plucked with a plectrum. This results in a very pure and definite sound.

The Tar is an essential part of Persian music and culture. It is used in a wide variety of genres, including classical, folk, and pop. The tar has a deep and rich history, and it continues to be an important part of Persian culture today.

The Chonguri is a traditional Georgian string instrument with a warm, rich sound. The instrument originates from the Georgian landscape, which is known for its beautiful scenery and gentle atmosphere.

The Chonguri is used to add depth and richness to the joint timbre of music. Its tender silk strings create a unique sound that is reminiscent of the Georgian landscape. The Chonguri is an essential part of Georgian music and culture, and it is one of the most popular instruments in the country.

SONUSCORE Origins Vol 7: TAR & CHONGURI. This KONTAKT instrument is the seventh installment of their Origins series. As known from the Origins series, this volume consists of two unique sampled instruments that are playable with Sonuscore’s revolutionary M.A.D. (Multi Arpeggio Designer) system or simply as single notes.

M.A.D. is a new type of arpeggiator that allows each instrument to have its own independent arpeggiating system. This means that the instruments can react to each other in a way that no normal arpeggiator would be able to do.

The result is that you can create more complex and interesting arrangements, and you can also create different sounds for each instrument. The possibilities are endless! M.A.D. is a must-have for any musician who wants to take their music to the next level.

The instantly usable cinematic presets feel much more like an arranged composition than a simple arpeggiated chord. With their COLOR menu finding the right sound for your composition is now easier than ever.

The strings on the Tar are plugged with a plectrum, resulting in a crisp, clear tone. It reflects the illustrious Persian culture, in which tar has been used for hundreds of years.

The Chonguri’s flexible scarlet strings provide warmth, depth, and richness to the joint timbre. An homage to the beautiful Georgian countryside, where the instrument is from.