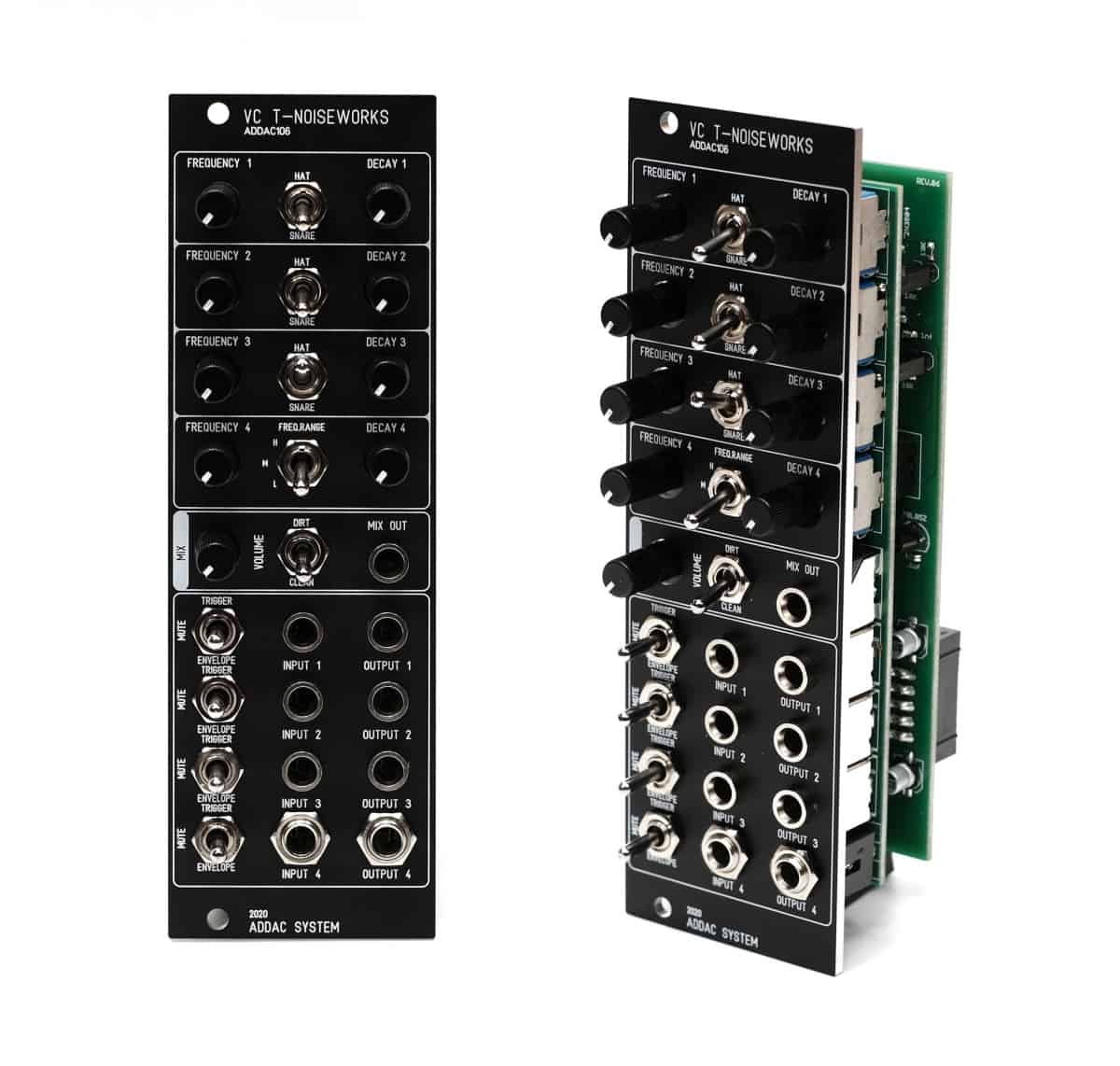 ADDAC System launched a new eurorack module. With the release of ADDAC106 T-Noiseworks the complete the series of T modules. 106 T-Noiseworks is the last in ADDAC’s T-Networks series, a straight forward 4 voice module with frequency and decay controls for each of the voices. As the name already unveils ADDAC added a noise source and created 2 different circuits that explore the timbre of a t-network when used to filter noise.

There are 2 different circuits in this module, voices 1 to 3 have a pre-vca t-network filter while in voice 4 the t-networks filter applied post-vca.

At each voice input there’s a switch which sets which type of input to use, this signal will be used to control an internal VCA hence why the type of setting defined here is important:
1. Trigger – Any incoming CV will be converted into a 1ms trigger as soon as it crosses it’s fixed threshold.
2. Mute – This disconnects then incoming signal effectivelly muting the voice.

3. Envelopes – This can be used with CV sources as well as Gate sources and simply follows the input signal.

This incoming signal will then be processed by a slew circuit which adds a decay factor allowing the user to set the “Tail” of each voice.

Trigger mode is mostly dedicated for percussive sounds while the Envelope mode is open to any external envelope control and able to control noise swooshes, swirls, crackles and pops simply out of t-networks filtered noise.

Audio inputs are also welcomed to be used as a Trigger/Envelope input, in fact the results of using this method had us all extremelly surprised, so please do try it out!

Diferences between voices:
The first 3 voices also feature a Timbre selector switch: Hat/Snare
In Snare mode all frequencies coming from the t-networks filter pass thru to the output .
In Hat mode it adds a High Pass circuit which removes the mid/bottom frequencies (characteristic of the snare strike) creating a higher spectrum output which is closer to a Hat timbre.
All of these 3 voices are also differently tuned from each other to offer more timbrical options.

Voice 4 is closer to a typical t-networks circuit but this time peculiar one where the noise is gated by the vca and then sent through the t-networks filter.

Hat and Snare are terms used very loosely here, they are timbrical references and do not in any shape or form try to effectively replicate the complex timbres of a real-world Hat or Snare.