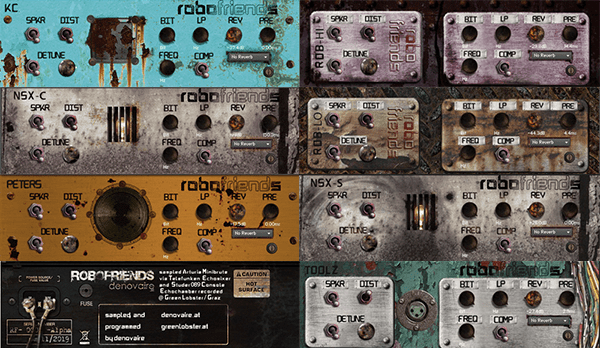 A new sound design label joined Triple Spiral Audio – Denovaire – who is an Austrian composer, sound designer, producer, experimentalist and performer with a specialization in the beautiful Indian Esraj instrument.

Out of the depths of planet earth’s junkyards come the ROBOFRIENDS. Used, destroyed, worn out, rusty, itchy and scratchy, they tell stories of a retro-futuristic age, when steam-powered rockets landed on Mars.  ROBOFRIENDS is a compilation of robotic synthesizer sounds. It can be used for film post-production, game audio or music production suiting special needs.

Creating Glitch tracks, pimping up a Hip-hop track or finding the right ambiances for game or movie can be done creatively and quickly. Not to speak of experimental live sets built of robots! From deep, aggressive and angry robots to playful funny characters: everyone is a ROBOFRIEND.

Robofriends – a library for Kontakt 5 and available at the intro price of €18,- (VAT included)