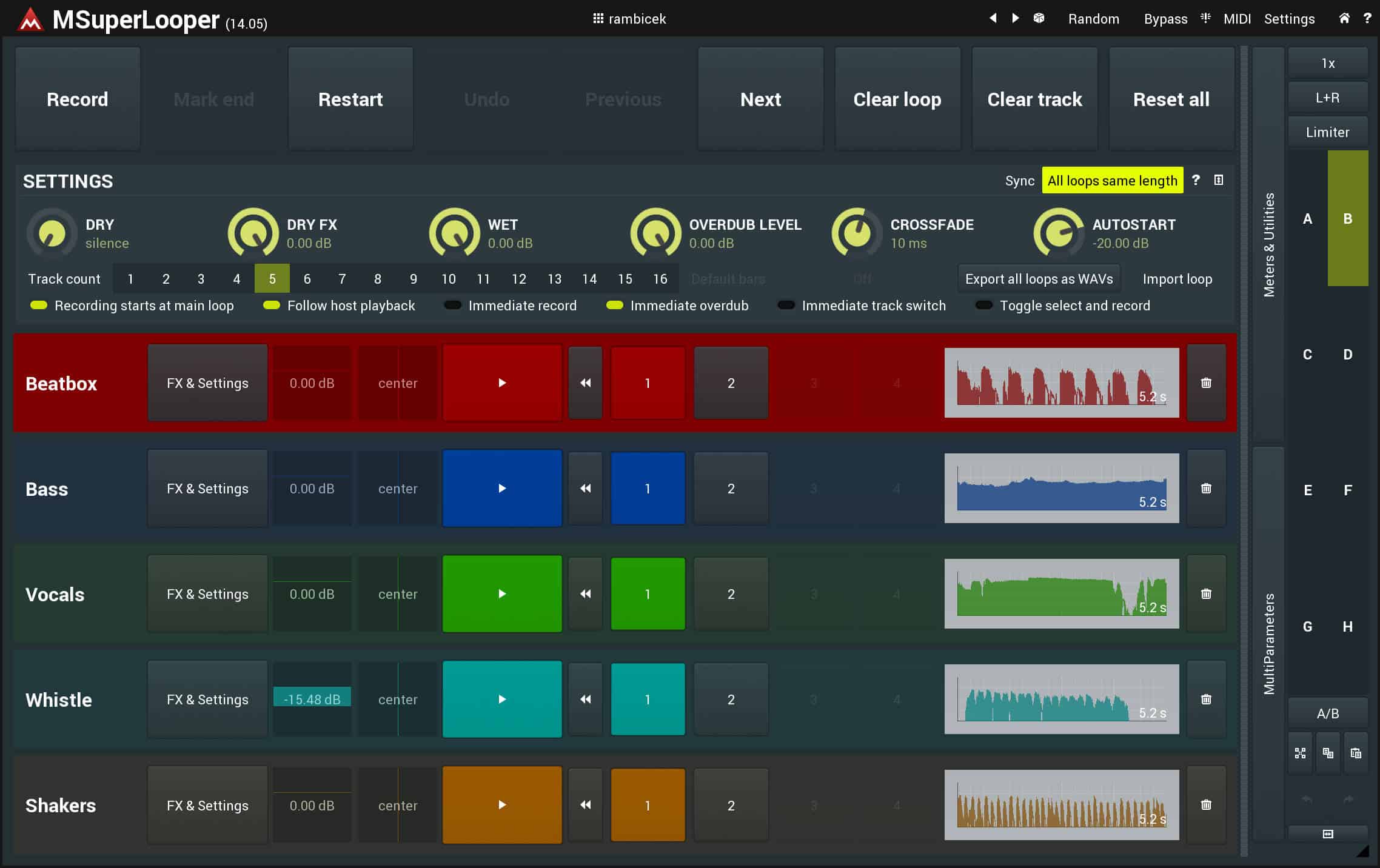 MSuperLooper is the next generation looping tool designed for live performances, capturing ideas and getting creative.

MeldaProduction released MSuperLooper — an intuitive looper that lets loops be recorded and overdubbed on the fly across up to 16 tracks with up to four loops in each, each with its own modular effect pipeline, to build complex multi-part performances in a single instance of the plug-in.

Loops, looping, and the tools to use or create them have become vitally important ingredients in modern-day music production. Placing this observation into its rightful context involves an appreciation of the wonderful world of looping — defined as recording on the fly into a seamless phrase that plays continuously over and over again, an art form which in itself dates back to the tape experiments of the formative Fifties when two ends of analogue tape were spliced together to (literally) form a closed loop. Listen to the psychedelic background sounds of The Beatles’ ‘Tomorrow Never Knows’ — released in August 1966 as the final track on the Revolver album — as an excellent early example of musical elements foreign to pop music being brought into play thanks to tape loops.

Live looping as we now know it today owes more to British guitarist Robert Fripp’s ‘Frippertronics’, first deployed in the Seventies as an analogue delay system concept, comprising two side-by-side reel-to-reel tape recorders configured so that the tape travels from the supply reel of the first machine to the take-up reel of the second, allowing sound recorded by the first machine to be played back on the second with the audio of the second machine then routed back to the first, causing the delayed signal (controlled by the distance between the two machines) to repeat — the number of repeats being controlled by the volume on the second machine, while new audio is mixed in with it.

Today’s technology has, however, taken live looping to new heights of accessibility, creativity, and versatility. After all, loopers used to have just a single track — enough to quickly capture an idea, perhaps, but certainly not enough for a great live performance.

Live to loop today is all about workflow, which is exactly where MeldaProduction MSuperLooper comes into play as an intuitive looper that lets loops be recorded and overdubbed on the fly across up to 16 tracks with up to four loops in each, each with its own modular effect pipeline, to build complex multi-part performances in a single instance of a plug-in that supports all major hosts on Mac (64-bit only) and Windows (32-bit and 64-bit). Although automating plug-ins is usually instant, the situation is very different when making music using live loops. Indeed, it can be damn difficult or often impossible to accurately hit the first beat of a loop, which can cause particular problems when using multiple tracks.

This is why MeldaProduction has introduced its ‘checkpoint’ concept. Cutting to the chase, most of the fun stuff happens via MSuperLooper’s big — Record, Mark end, Restart, Undo, Previous, Next, Clear loop, Clear track, and Reset all — buttons at the top of its intuitive GUI (Graphical User Interface), easily assignable to a MIDI (Musical Instrument Digital Interface) controller or other device.

Though the functionality of those buttons is self explanatory, the underlying logic behind them is actually quite complex, depending on several settings. Saying that, most of those buttons are not executed immediately but rather on the next checkpoint — simplest case, a checkpoint is a bar, so whenever one of those buttons is pushed their function occurs as soon as the current bar ends and the next bar starts. So it is easy to use MSuperLooper since there is no need to think about precise timing, and users can quickly switch between tracks when recording.

Musically, MSuperLooper can run in sync with a DAW (Digital Audio Workstation) or freely, so users can mark the master loop end point manually or lock the loop length to the host DAW’s timeline. Thereafter, loops can also be flipped between forward and reverse playback at the click of a button — and all without losing sync, though the looping possibilities far from end there as each of those 16 tracks can hold up to four separate loops, making it perfectly possible to capture variations on individual parts — different lines for the verse and chorus, for example.

Elsewhere, MSuperLooper also features a full MXXX-based effects rack into which users can load an array of diverse effects processors, matched up to the MeldaProduction plug-in licenses they own already. Applying a little EQ, compression, and reverb or totally transforming a recorded loop with distortion, spectral effects, and modulation-based processing, MSuperLooper allows anyone to build their ideal effects chain on three parallel channels for the recording loop and another three for the live input.

But beyond its liberating looping workflow and supercharged effects engine, MSuperLooper is also well equipped for MIDI control. Feel free to assign notes and CCs (Control Changes) to switches, effect parameters, and more — manually or via MIDI learn — for realtime manipulation via a controller’s buttons, pads, knobs, and foot switches.

Please note that while many MSuperLooper effects modules are free, others need to be purchased separately; MSuperLooper follows the same system as MXXXCore, where MSuperLooper users can check which licenses they may need to unlock certain effects.