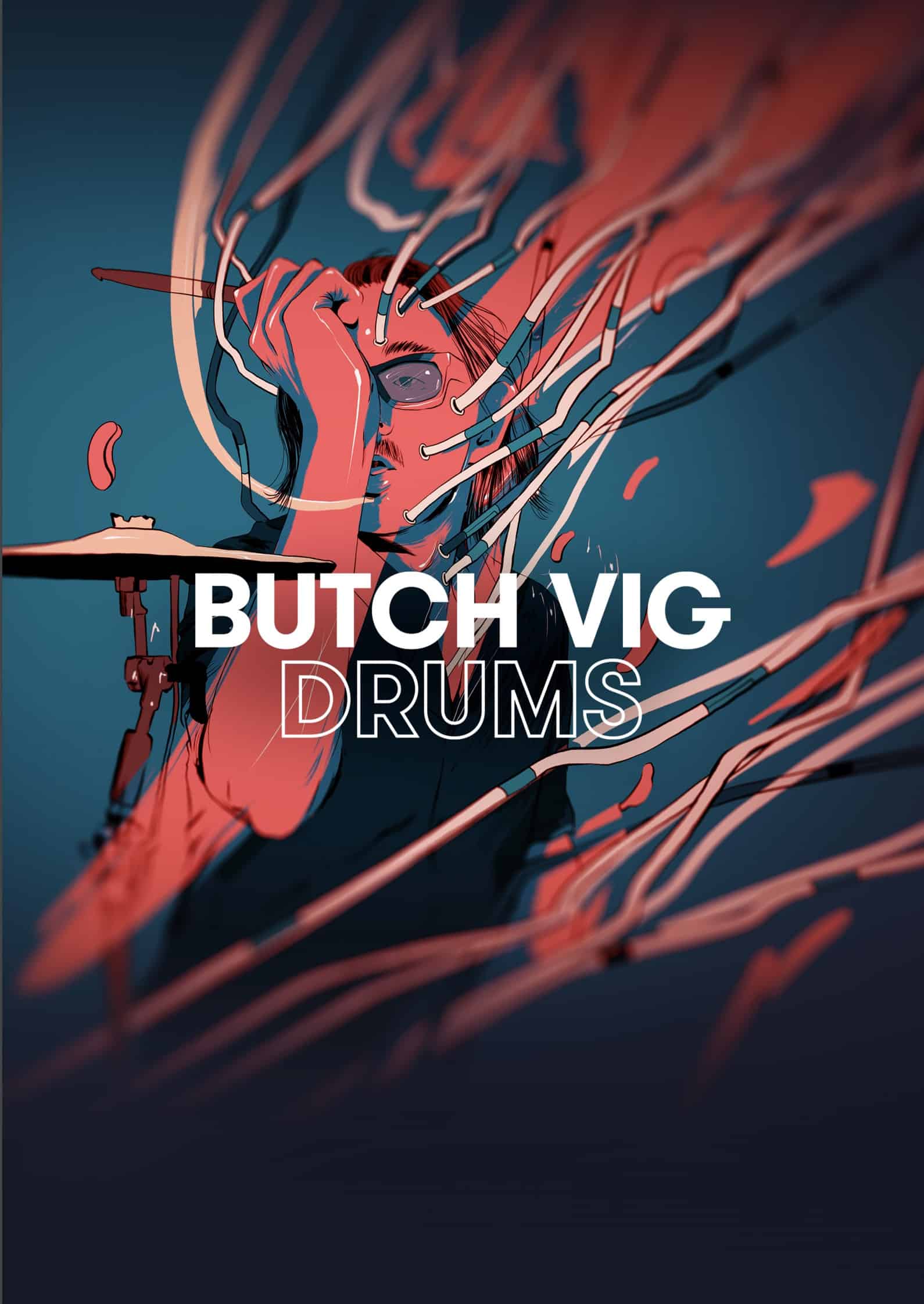 KONTAKT Play Series: BUTCH VIG DRUMS gives you heavily processed drum sounds designed by a true production master. Choose from 21 customizable kits each with 16 preset grooves, to lay down rhythm tracks that work in a variety of styles.

Created with the Grammy Award-winning writer and producer, it offers 21 individual drum kits, each with 16 one-shots, created by one of rock music’s most influential producers. Each kit contains 16 groove patterns that can be edited in any DAW with MIDI drag and drop, plus a wealth of macro effects.

The sleek and simple interface allows for quick and inspiring playability. As a musician, songwriter, and record producer, Butch Vig is famed for his signature production of modern drum sounds.

Part of the Play Series: Great-sounding presets and real-time control in an intuitive interface

The process of recording this hard-hitting drum instrument began in a plush Hollywood studio, where the acoustic drums were recorded. These recordings were then taken to Butch Vig’s GrungeIsDead studio, where they were processed and transformed into something new. The resulting sound is both aggressive and unique, and it is sure to add a new dimension to your music.

Whether you are looking for a new drum sound for your latest track or you want to add some extra power to your live show, this instrument is sure to deliver.

BUTCH VIG DRUMS come packed with heavily processed sounds. Created by a true production master, the instrument allows you to fast lay down heavy rhythms for your tracks. Play beats live using one of the curated kits, or choose from a selection of built-in MIDI patterns, which you can edit by dragging and dropping into your favorite DAW. Dial-in effects give them even more flavor, for drums that work in a variety of styles.

The drum sounds were recorded at United Recording’s iconic Studio A in Hollywood using a blend of old school studio techniques and new school tweaking. They were then given Butch’s unique processing treatment, running through a bespoke selection of analog and digital preamps, compressors, stompboxes, and more at his home studio ‘GrungeIsDead’.

Butch Vig is all at once a musician, a songwriter, and a record producer. Best known as the drummer and co-producer of the alternative rock band Garbage and the producer of the seminal albums including Nirvana’s “Nevermind”, Smashing Pumpkins’ “Siamese Dream” and Green Day’s “21st Century Breakdown”, he is famed for his pioneering approach to producing modern drum sounds.

The Kontakt Play Series Crunchy instrument was created by Butch Vig, a renowned drummer, and producer. This instrument is designed to provide a punchy, crunchy sound that is perfect for adding texture and depth to your tracks. The instrument comes with a variety of different sound presets, so you can easily find the perfect tone for your music.

In addition, the instrument comes with a built-in effects engine, which allows you to add a variety of different effects to your sounds. With its powerful sound design capabilities, the Kontakt Play Series Crunchy instrument is an essential tool for any producer or composer.

21 individual kits, each with 16 one-shots, created by one of rock music’s most influential producers.

Each kit contains 16 groove patterns that can be edited in any DAW with MIDI drag and drop, plus a wealth of macro effects.

The sleek and simple interface allows for quick and inspiring playability. With so many options to choose from, you’re sure to find the perfect sound for your next track. Whether you’re looking for a heavy-hitting drum line or a more subtle groove, the Producer’s Pack has you covered.

Vig’s 21 kits are a blast from the past, with their comic-book illustration and big, bold sounds. The simple playability is irresistible, and the post-recording processing adds even more weight to the drum kits. The distortion and saturation create a weighty set of drum kits, but there is plenty of room for adding even more weight. This is a tribute to the quality of the source material here.

So dive in and start creating today. Who knows where your next hit will take you.

Get BUTCH VIG DRUMS now for just 49 € until October 1st.