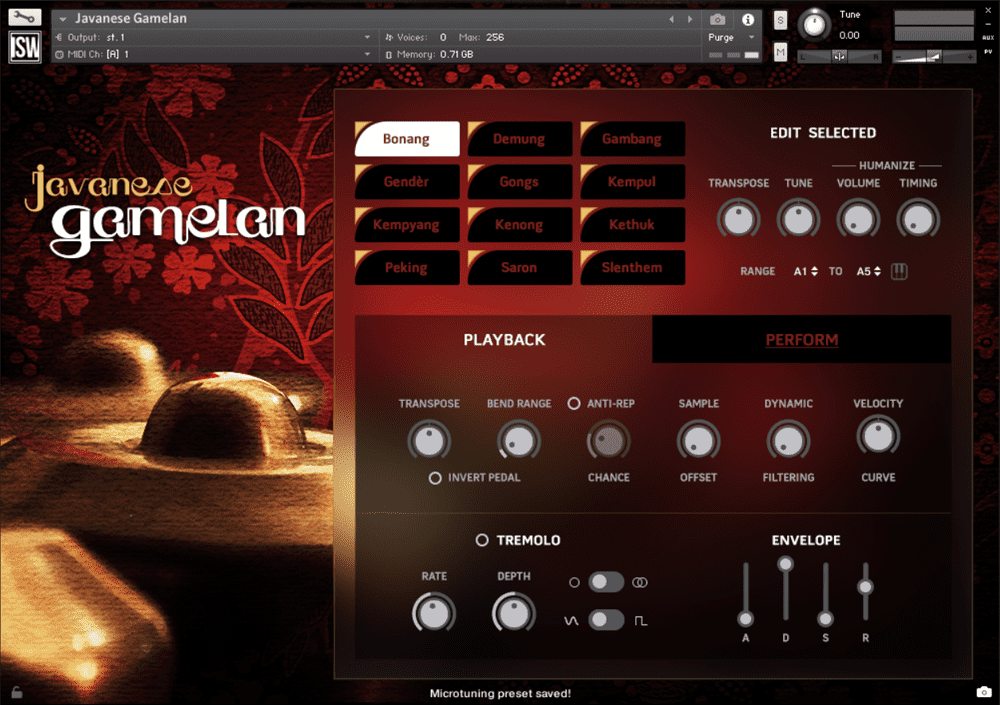 An Inspiring Ensemble From Indonesia

Become immersed in the ancient sound of the Javanese gamelan, now available as a virtual instrument from Impact Soundworks. This 1,500+-year-old musical ensemble and art form is centered around tuned, metallic percussion that, in unison, produces an evocative, meditative tone.

Gamelan is an ancient artform of Indonesia; it is a musical ensemble most often containing percussive, tuned metallophones with meditative, bell-like tones. The gamelan is among the oldest known instrument ensembles that is still played today, known to be at least 1,200 years old. Each instrument within the ensemble has its own unique design, size, and tuning, resulting in a rich and transcendent sound when played together.

The sound of the gamelan was hugely influential on 20th-century Western composers like Satie, Cage, Bartók, Messiaen, and Britten, but can also be heard prominently in acclaimed scores like Akira, Battlestar: Galactica, The Girl with a Pearl Earring, and many others.

Impact Soundworks sampled Javanese Gamelan (as opposed to Balinese, or Sundanese) consists of twelve instruments made from bronze in Indonesia, carefully played and sampled by composer Gonzalo Varela to capture their full clarity and nuance. Impact Soundworks have presented them here as an ensemble with a standard Western tuning, along with the option for custom microtuning scales, and authentic Pelog and Slendro scales.

The sound of gamelan has inspired composers in the West for centuries: from Satie, Cage, Bartók, Messiaen, and Britten, to James Newton-Howard, Alexandre Desplat, and Bear McCreary. Now, it can inspire your music as well!

Our virtual instrument is of the Javanese variety, as opposed to the more commonly-sampled Balinese variety, and gives you incredible control & playability with twelve individually sampled instruments.

The single instrument patches are presented in two idiomatic tunings – Pelog and Slendro – as well as equal temperament, suitable for traditional Western music. The ensemble builder allows for per-instrument tuning, mixing, effects, and humanization, allowing you to create your own custom blend of tones in whatever note ranges you choose.

You can truly shape the sound of the gamelan with our integrated Console mixer & FX rack, pictured below. In the ensemble patch, each instrument gets its own channel, allowing you to add up to 8 modular effects for each. EQs, compression, reverb, modulation, distortion and many more FX units are available, giving you endless tonal possibilities.

Javanese Gamelan is available now for the introductory price of $79 (MSRP: $99) through Thursday, Nov 5th. The full version of Kontakt is required.