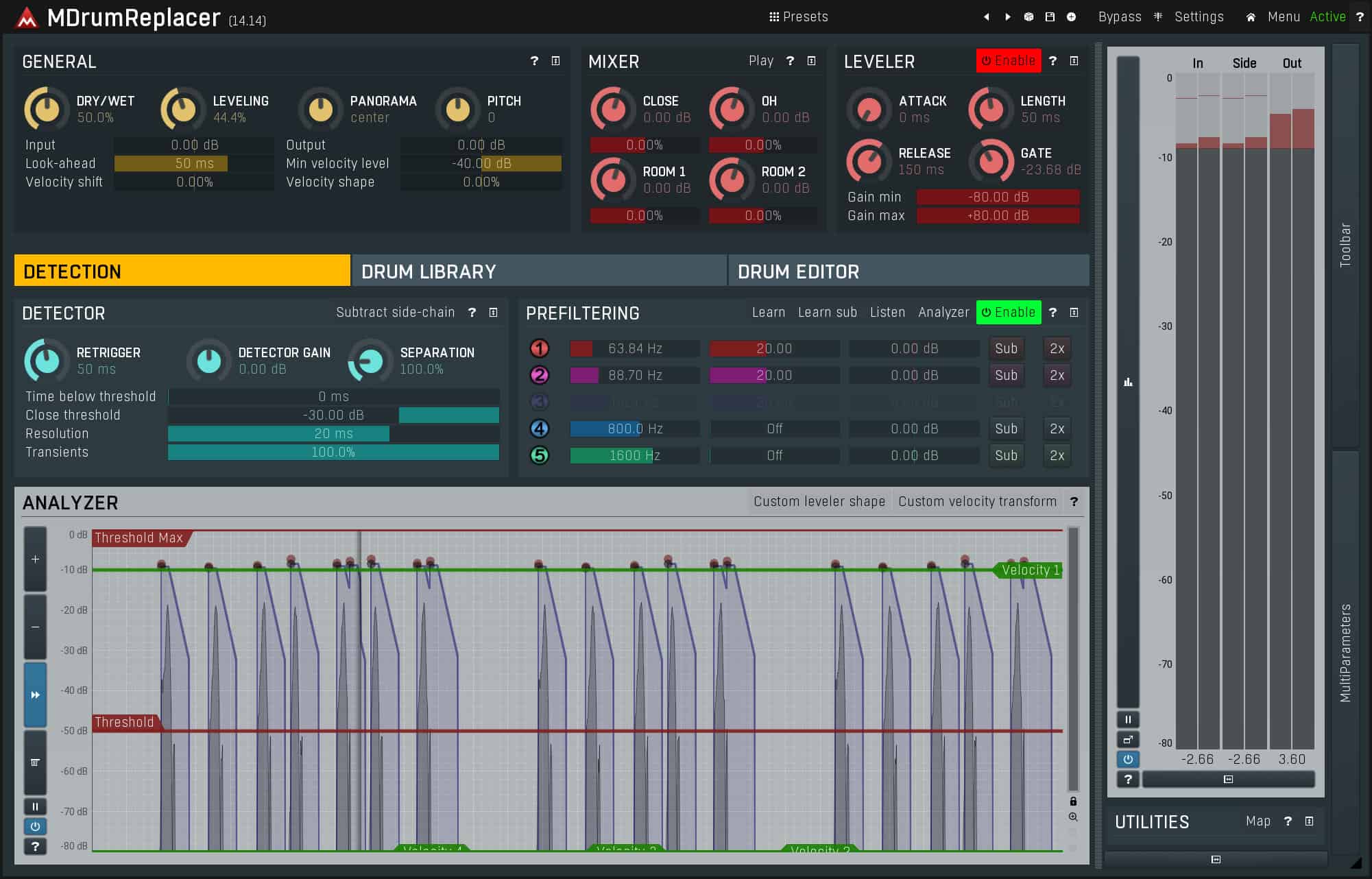 MeldaProduction released MDrumReplacer — an aptly-monikered drum replacement plug-in pairing the best drum-detecting algorithm on the market with perfectly-recorded multilayer samples as an easy-to-use tool to fix flaws, replacing weak sounding snares, lousy kicks, and such like with a chosen multilayer sample in both single drum and mixed tracks in a matter of seconds.

Appreciating advances inherent in MeldaProduction’s MDrumReplacer plug-in perhaps involves an appreciation of drum replacement itself. In modern music production parlance, drum replacement is the practice of an engineer or producer recording a live drummer and replacing (or adding to) the sound of a particular drum with a prerecorded sample — say, replacing all the recorded snare hits with the sound of a handclap. History has it that the technique was pioneered in the late Seventies by American engineer, inventor, and producer Roger Nichols (R.I.P.) while working with American rockers Steely Dan in the studio.

Subsequently, it became increasingly commonplace to replace every snare hit in a performance that may or may not sound subjectively ‘good’ with an ‘ideal’ snare drum hit, and has since grown in both popularity and complexity since computer-based technology took hold in music production — to the point where some suggest that the practice defeats the purpose of having a live drummer as opposed to a drum machine, making for an end result that is effectively exactly the same as what a drum machine would produce if equipped with a custom drum sample recorded especially for it. In reality, however, crafting more complexity in an increasingly automated world is not necessarily easy to achieve, but it does not have to be that way — which is exactly where MeldaProduction’s magical MDrumReplacer plug-in comes into play.

Putting it this way, MeldaProduction itself pulls no percussive punches when posing some hard-hitting questions with a semi-serious delivery: “Does your snare sound like a bird vomiting on a plastic table? Does your kick sound like a horse s**t falling on the ground? Then just replace them!” That, then, is MDrumReplacer’s raison d’être, effectively. After all, not every drum hit is perfect, not every drum take is flawless, and nor does every drum sound good. Get this, though: with MDrumReplacer no drum recording is gone for good necessarily. No matter if it was suffering from poorly-positioned microphones or the sound of the entire drum kit is, in retrospect, simply not up to scratch or even to taste, MDrumReplacer fixes flaws in a matter of seconds. But best of all, the recordings will still sound spectacularly live after applying MDrumReplacer’s magic, thanks to the plug-in pairing the best drum-detecting algorithm on the market with perfectly-recorded multilayer samples.

MeldaProduction’s MDrumReplacer’s powerful drum-hit DETECTOR works with maximum precision, finding the hits to be replaced in both single instrument recordings and even mixed drum sessions with minimum user intervention. It is equipped with advanced analysis technology that thoroughly examines the audio material to identify the most prominent frequencies and sets the resonators accordingly, then users can audition just the filtered signal with the ‘listen’ feature so that they can easily adjust the filters to set them as precisely as possible. Ultimately, users can completely replace drum hits or get creatively effective by blending the original sound with the selected sample — enhancing kick drums with some added electronic flavour, for example. But better still, since MDrumReplacer basically includes MeldaProduction’s MDrumLeveler plug-in — itself marketed as the ultimate dynamics processing tool specifically designed for working with drums, MDrumReplacer need not necessarily only be used to replace ‘bad hits’ but also to iron out the drummer’s performance by simply letting the DETECTOR find an event and compute its correct level, with the requested DETECTOR GAIN then being applied to the event, so that the drummer sounds solid and firm-handed as a result.

It is simply a case of running the DETECTOR and speedily selecting a sample that best fits the track — from MeldaProduction’s massive multi-sample libraries (totalling over 80 GB), including the recently-released Drum Empire 2020, the latest in its lengthening line of free extension packs for its MDrummer virtual instrument plug-in, the most advanced drum machine and virtual drummer on the market — with which to replace the unwanted drum hits in most cases, however. Helpfully, MDrumReplacer uses the mighty MDrummer’s sound engine, enabling users to choose synthesized drums as well as top-quality drum multi-samples that respect the original drummer’s performance and feel, ensuring that it remains resolutely human and not robotic, though some imperfections can be fixed with the plug-in’s inbuilt drum LEVELING. Lending an air of further flexibility, MDrumReplacer’s presets are carefully stored in a system database and users can quickly access them from any project in any host, while the plug-in itself can automatically share users’ presets and also allows them to download other users’ presets from MeldaProduction’s servers.

Turning to literally look at things from a visual viewpoint, it is well worth noting here that user interfaces need to be fast, simple to use, and easy on the eye. Everyone’s needs, of course, can be different, so flexibility is important. MeldaProduction’s MDrumReplacer meets those observations head on — as, indeed, do its many software siblings — with the most advanced GUI (Graphical User Interface) engine on the market, allowing users to choose colour and style to personalise what is also a freely-resizable plug-in, one which is accelerated by the host computer’s GPU (Graphics Processing Unit), making for lightening-fast graphics while freeing up extra power from the host computer’s CPU (Central Processing Unit) to focus on that all-important audio. Although current computers can clearly do their thing faster than ever before, algorithms are becoming more complex and projects bigger as a result, so processing power still needs to be used effectively. MeldaProduction’s MDrumReplacer uses the fastest algorithms, takes advantage of the newest processor capabilities, handles the graphics accordingly, and shares those resources with other MeldaProduction plug-ins. Indeed, it is amongst the fastest on the market, while providing the best possible audio quality using 64-bit audio processing to handle any sampling rate. Reality dictates that it does not make much sense to go over 192kHz, but if MDrumReplacer users think that it is a good idea to do so then the plug-in can do that.

MDrumReplacer makes for a creative user experience with an extensive feature set that is surely second to none, including a powerful MIDI (Musical Instrument Digital Interface) processor — listens to MIDI controllers and keyboards to allow realtime control of any parameters; multiple parameter control using a single so-called multiparameter — handy for automation or smartly morphing between banks of settings, for example; A to H slot switching — taking the A/B comparison concept to the next level by enabling users to access up to eight instances of the plug-in, copy and paste the slots, and freely switch between them, as well as allowing for morphing between the first four slots with an X-Y pad to find the perfect blend between four preloaded presets; and four fully-featured modulators that can control any set of parameters — including other modulators, to but scratch the surface of this deep diving-enabling plug-in par excellence.

MDrumReplacer makes for a compelling case for drum replacement that is light years beyond that which was first envisioned by Roger Nichols. Needless to say, anyone suffering from vomiting-sounding snares or horse s**t-sounding kicks knows where to turn!

MeldaProduction’s MDrumReplacer is available to purchase — as an AAX-, AU-, VST-, and VST3-supporting plug-in for Mac (64-bit only) and Windows (32-bit and 64-bit) — at an introductory discounted price of €29.00 EUR (inc. VAT) until January 3, 2021 — rising thereafter to the regular price of €129.00 EUR (inc. VAT). MDrumReplacer comes with a huge library of samples, multi-samples, rhythms, drum sets, loops, and other resources that are distributed for free via MeldaProduction’s MDrummer packs, including its latest Drum Empire 202.

Note that MDrummer Essentials is required for MDrumReplacer to work properly.