81% Off Sale on Extended Guitar Bundle by Edu Prado Sounds 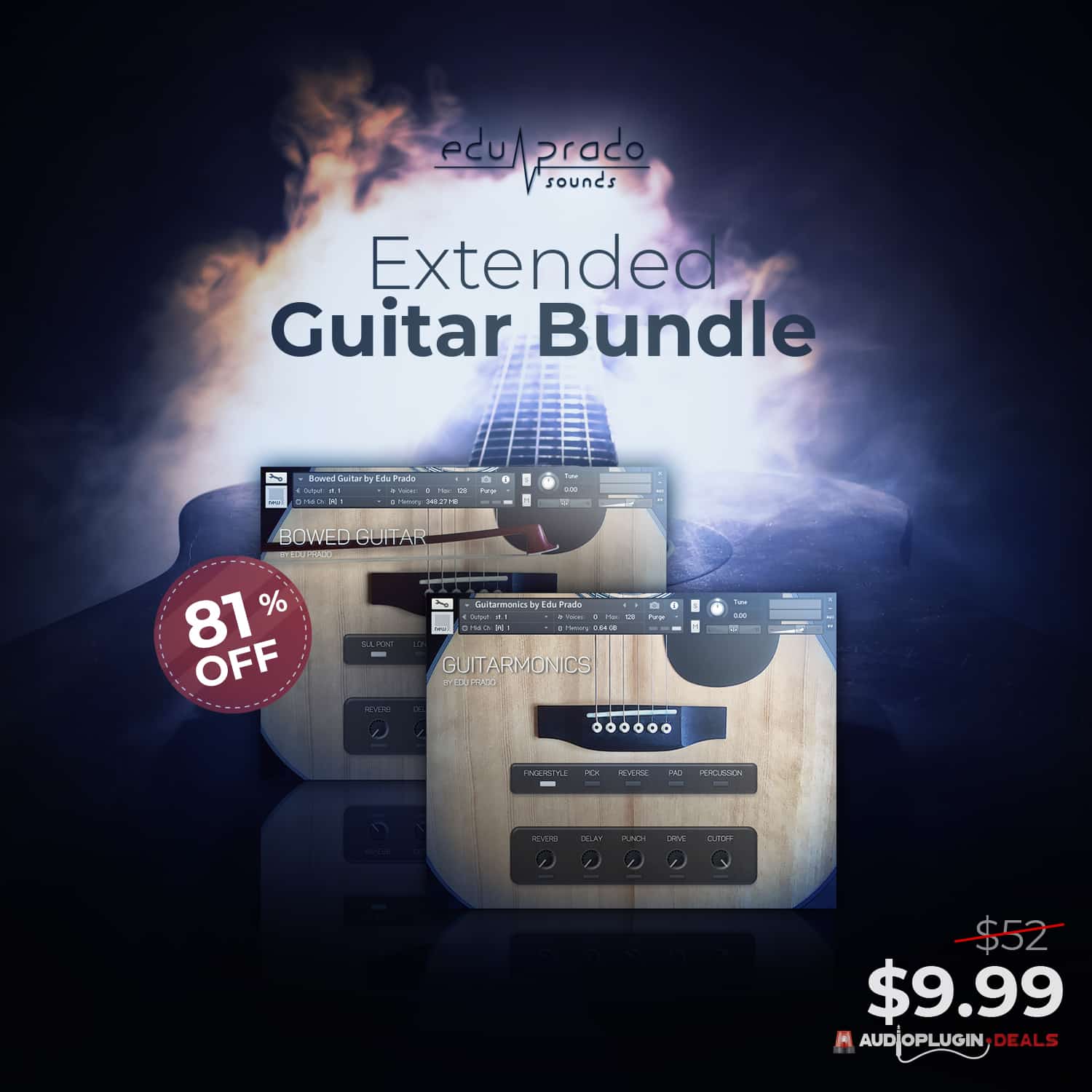 For only $9.99 (normally $52), get the Extended Guitar Bundle (Affiliate Link) by Edu Prado Sounds!

These libraries part of Extended Guitar Bundle (Affiliate Link) are incredibly versatile, extremely useful for all kinds of projects, from pop beats to cinematic textures; and include built-in effects such as reverb, delay, drive, and cutoff.

One of the sample libraries used is a virtual instrument based on acoustic guitar harmonics, and percussive sounds. The instrument, called Guitarmonics, uses the Kontakt sampler and offers five different sampled patches: Fingerstyle; Pick; Reverse; Pad; and Percussion, with optional built-in reverb and delay.

The Fingerstyle and Pick patches present a chromatic harmonics option played with the finger or with a pick, respectively. These patches are useful as they offer a unique sound that, even though is not so hard or unusual on acoustic guitar, can be played fast and easily in all chromatic pitches, which cannot be done on the real instrument. The Reverse patch consists of the harmonics samples played in reverse, which can be particularly useful for sound effects and textures. In the reverse patch, when a key is played, there is no immediate sound, as the sample is played from the end to the beginning, starting with silence and growing backwards to the moment when the harmonic was struck, producing a riser effect with a strong hit in the end. For that reason, the notes must be held until the desired effect is reached, going until the very end of the sample or not; the sustain pedal can be helpful to hold the notes until the exact desired moment, as can be seen in the scores.

The Pad patch is one of the most unique and interesting of the Guitarmonics, as it offers an original and distinct pad that lies somewhere between a synth and organ-like sound. This patch was created only from the tails of the harmonic samples of the acoustic guitar. The main sample of the pad patch was built by layering different parts of the tail of various octaves of the harmonic samples, giving movement as they vary in intensity and change in the stereo field. An envelope modulation also allows the use of the pad patch more like a lead synth keyboard, with a “bell-like” attack, as featured right in the first cue, also predominant in the cue “Hit”. The higher the velocity, the faster the envelope attack, and therefore a lower velocity will give a slow attack for the pad.

The Percussion patch brings a great variety of percussive and drum like sounds that can be achieved with an acoustic guitar, from tapping and hitting the top or the back of the instrument to picking and plucking muted strings. Playing those sounds with a virtual instrument allows more agility and different rhythmic patterns than what could be achieved only with the live instrument.

Please Note: The full version of Kontakt 5.5 or above is required. Not for Kontakt Player

The second virtual instrument is called Bowed Guitar, and, as the name suggests, it was created from playing an acoustic guitar with a cello bow. The Bowed Guitar is also implemented in Kontakt 5 sampler, and offers five distinct patches: sul pont; long; tremolo; pad; and harmonic.

On the Bowed Guitar the dynamic expression of each patch is controlled by the modulation wheel (or mod wheel). All patches can hold the notes for an undetermined amount of time, as the samples are looped. To avoid the loop being recognizable and sounding artificial, each sample is at least 25 seconds long, and when looped they are played in reverse, creating an even longer pattern, providing a natural and organic sound to the instrument.

The sul pont patch consists of the guitar being played with the cello bow really close to the nut, producing a similar effect as the sul ponticello technique used in bowed string instruments. This results in a more harsh and airy sound, producing different harmonic partials, giving also a more organic feel as it has a constant variation.

The long patch presents long bowed acoustic guitar notes. The next patch features a fast tremolo articulation, and it is played close to the nut producing a similar tone to the sul pont patch. The speed of the tremolo articulation is not always constant, and the subtle variations give the patch more character and singularity.

The pad patch is the most different from the others, as the sample is already processed to achieve a heavy pad sound. To reach the pad sample as used in the instrument the software PaulStretch (mentioned in section 2.4.2) was used. A sample from the sul pont patch was extremely stretched and layered with different octaves and harmonics. The last patch features a bowed harmonics patch, where the guitar strings were lightly stopped to produce a high and light airy harmonic, and the sound of the bow sliding across the string can be clearly heard.

The sul pont, tremolo and harmonic patches have a special feature, presenting two different options. When played from low up to medium velocity the normal articulation sample is triggered. However, when played with high velocity a different sample is triggered, where the left and right channels are out of phase, creating a wide stereo effect of movement, simulating two instruments playing and moving in the stereo field.

Please Note: The full version of Kontakt 5.5 or above is required. Not for Kontakt Player

How much YouTubers make with 10,000 Subscribers