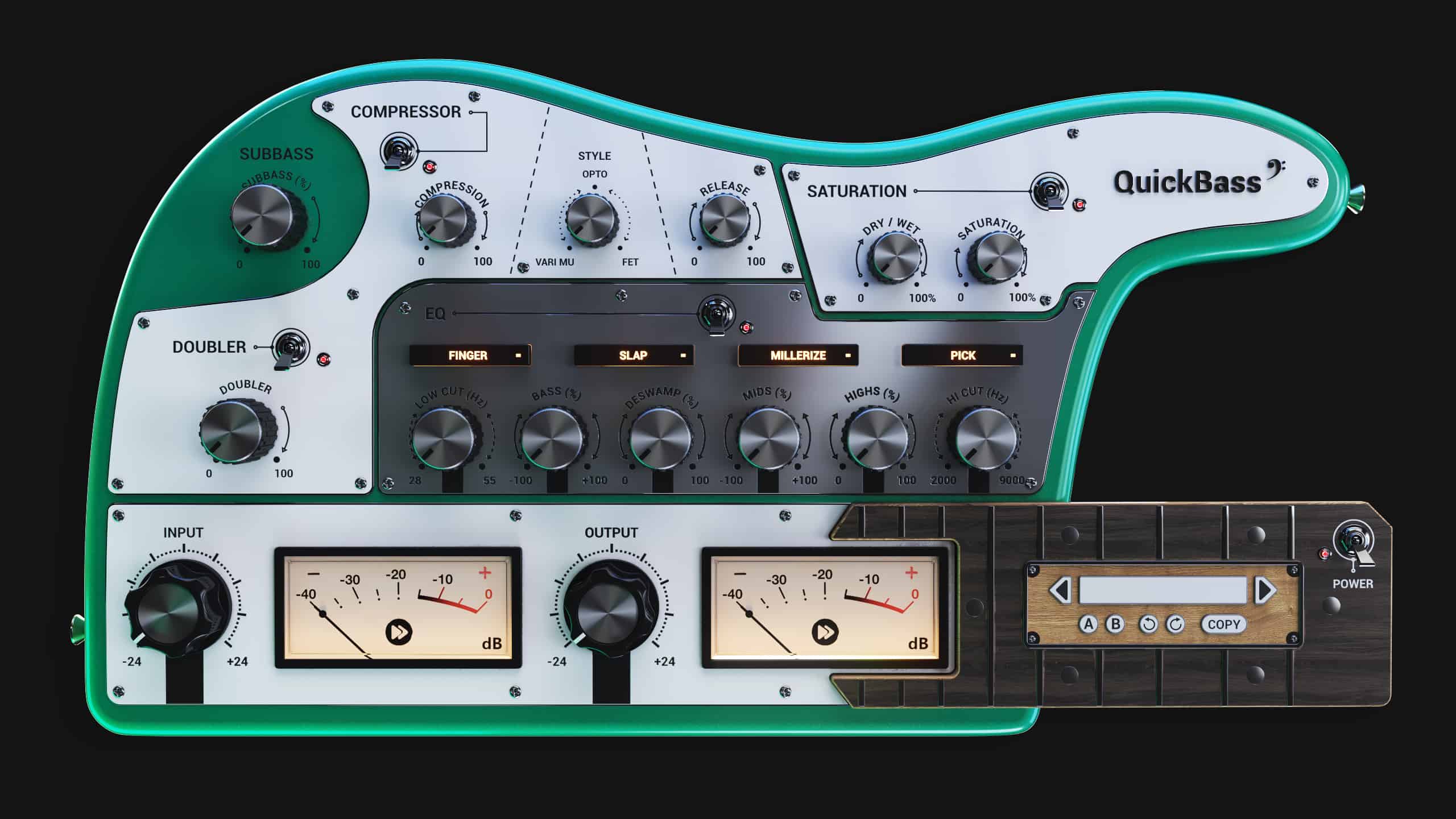 QuickBass bringing the fruits of an already acclaimed cross-brand collaboration between FireSonic (with its always-searching-for-a-shortcut attitude) and SounDevice Digital (forever fine-tuning tools based on the long-term experience of mixing various recordings in its namesake SounDevice Studio) to bear upon the lower frequencies of the sound spectrum as an aptly-named bass guitar sound-perfecting plug-in par excellence as the two companies concerned continues creating a series of tools as Instant Audio to instantly assist anyone in achieving their desired sound.

Having started their collaborative sound quest last year with Quick AG, an all-in-one acoustic guitar solution compatible with major AAX/AU/VST DAW (Digital Audio Workstation) applications on both macOS and Windows as a superlative shortcut to sought-after natural acoustic instrument sounds, Instant Audio’s QuickBass follows (in a similar) suit, though this time designed to achieve the perfect bass guitar sound as quickly as possible — as, indeed, implied by name.

Needless to say, bass guitar is often considered to be the coolest of all instruments — by bassists! But there is no denying that the bassist should anchor everyone else — especially since the primary function of a bass guitar is to maintain a steady rhythm, with the bassist working closer to the drummer than the guitarist in a typical rock and pop setup. Sadly, however, it is often one of the most overlooked and underrated instruments. In the recording world, with a good DI (Direct Input) box being put to good use, a finely-played bass guitar often sounds as good as it gets, but a little push in the right direction here and there can make all the difference between sounding good and great. Getting there, of course, can be easier said than done — even in today’s supposedly-speedy DAW-driven recording world where using multiple plug-ins to achieve one goal simply makes no sense since there can be unwanted interactions between plug-ins while their often over-the-top features can combine to unnecessarily drain precious CPU (Central Processing Unit) power. Put it this way: with QuickBass, quick EQ, quick compression, quick saturation, and quick fatness are all available to all in next to no time at all.

As such, Instant Audio has helpfully found the sweet spot between speed and versatility with QuickBass by providing the tools necessary to achieve the perfect bass sound in a single plug-in with as few controls as possible, all anchored around a photorealistic GUI (Graphical User Interface) that looks like real — bassist-friendly — hardware while easily adapting to the varying needs of individuals. It is perfectly possible to resize it at any time by simply dragging the bottom-right corner positioned arrow accordingly, for instance. In many cases, simply pressing the standout style buttons — FINGER, tuned especially for finger-playing style; SLAP, tuned especially for slap bass technique; MILLERIZE, offering untypical settings for slap bass based on a famous player’s style; and PICK, tuned especially for rock playing with a pick.

In the EQ section will be enough to get the job done, though there are also a healthy selection of presets available to help users get going in their desired direction with minimal interaction involved. As an effect that adjusts the amplitude of audio signals at particular frequencies, those featured in that EQ section have been chosen to suit the sound of those bass-playing styles and techniques, thanks to the following self-explanatory controls: LOW CUT (Hz) — with frequency range settings spanning from 28 to 55 for creating cleaner bass sounds; BASS (%) — for boosting or lowering the level of bass in the signal between -100 and +100 (with 0 by default); DESWAMP (%) — for dropping down the level of ugly frequencies in lower mids and higher bass frequencies, ranging from 0 to 100; MIDS (%) — for boosting or lowering the level of mids in the signal between -100 and +100 (with 0 by default); HIGHS (%) — adding a level of highs to the signal, ranging from 0 to 100; and HI CUT (Hz) — cutting the highest frequencies that are superfluous to the bass guitar signal with frequency range settings spanning 2000 to 9000.

As an effect that changes the dynamics of the incoming signal, compression can greatly assist in creating great bass guitar sounds, so QuickBass features a switchable COMPRESSOR with an associated COMPRESSION control ranging from 0 to 100 and also offers a STYLE control to blend three different types of simulated hardware compression: OPTO — originally made with the audio signal feeding a lighting element (such as an LED), which shines upon a light-sensitive resistor, the resistance of which informs the compression circuit how much and how quickly to attenuate the audio signal, à la LA2A; VARI MU — as the signal feeding these tube compressors increases, the actual current sent to the grid of their tube decreases, culminating in a reduction in overall level, à la 670; and FET (Field Effect Transistor) — capable of exceedingly fast attack times with a lot of colour, à la 1176.

Creativity continues with more easy-to-use controls, such as those found in QuickBass’ switchable SATURATION section, with the SATURATION control itself ranging from 0 — a pleasant, subtle-sounding ‘analog-ish’ color — to 100% — total distorted, fuzzy mayhem — based on the simulated sound of different distortions of overdriven electronic elements such as tubes and transistors, while DRY/WET balances the parallel level of the clean and distorted signal between 0 and 100% settings.

As an aptly-named bass guitar sound-perfecting plug-in that is worthy of taking up its position in Instant Audio’s series of tools to instantly assist anyone in achieving their desired sound, QuickBass has got its users covered. Clearly it is the ultimate bass polisher and finalizer for when speed and ease is of the essence.

Instant Audio’s QuickBass is available to purchase for a time-limited introductory promo price of €29.00 EUR until April 11, 2021 — rising thereafter to €99.00 EUR — as an AAX-, AU-, and VST-compatible audio plug-in directly from United Plugins

A 15-day, fully-functional trial version for macOS and Windows can be downloaded for free.

Note that no iLok, dongle, or internet access is required for QuickBass activation. (All United Plugins software uses license files for activation and owners can freely use purchased software on all their computers as long as they are the user.)

Scenic Vibrations by Frozen Plain – Up to 50% off with rewards