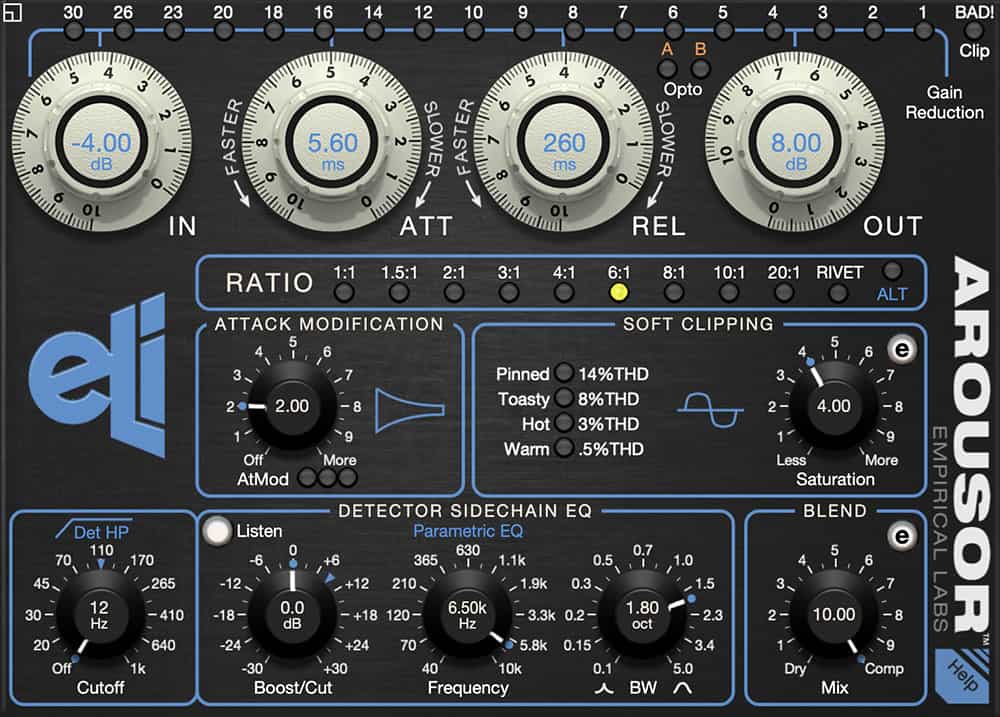 Empirical Labs released AROUSOR™ Rev 3 — the latest development of its flagship compressor plug-in, introducing more tones based on its Distressor hardware counterpart. The hardware counterpart was one of the best-selling high-end compressors of all time as the product that started it all for the professional audio signal processing equipment designer and manufacturer/plug-ins producer, with the addition of two Opto (A and B) compression modes, as well as two additional (6:5:1 and 7:1) ratios for even more dynamic possibilities, available for free to existing owners of AROUSOR™.

We did review the older release, see our Arousor Review – a Distressor Compressor by Empirical Labs for more information.

Arousor applies phenomenal character compression and saturation. Arousor is very close to the Distressor and added many features and continues to add more that are not available in the raw model it is built after.

Being borne out of ELI founder Dave Derr’s love of classic compressors like the 1176, LA-2A, and Gain Brain (amongst others), the Distressor incorporates his favourite sonic characteristics of outstanding outboard originally released way back when with other unique and interesting features that have made it a staple for audio engineers all over the world as one of the best-selling high-end compressors of all-time. It is inevitable that such a popular product would one day receive the plug-in treatment, taking the soul of the company’s professional audio signal processing equipment hardware and applying it to the wonderful world of ITB (in the box) workflow within a DAW (Digital Audio Workstation), albeit AROUSOR™ is the only native Distressor plug-in produced by ELI itself. As a new and improved (EL8-X) version of the Distressor increased its tonality with the addition of new features, so AROUSOR™Rev 3 — the ultimate evolution of ELI’s flagship compressor plug-in — introduces more tones based on its Distressor hardware counterpart.

New in Rev 3 of AROUSOR

Kicking off with two Opto (A and B) compression modes based on the time constants of a classic and a modern LA-2A compressor that many existing owners of AROUSOR™ have been waiting for — it is, after all, a much-loved Distressor feature, noteworthy new additions to AROUSOR™Rev 3 also include a SOFT CLIPPING expert (e) panel — allows for introducing more second harmonic distortion and an ability to place the compressor input before or after the soft clipping circuit; a Listen mode — to hear what frequencies are affecting the DETECTOR SIDECHAIN EQ’s compression detector; additional 6:5:1 and 7:1 ratios (accessible by enabling ALT mode in the RATIO section) — for even more dynamic possibilities; and an enlargeable GUI (Graphical User Interface) — to double its original size for more comfortable onscreen editing.

As the update existing owners have been waiting for, AROUSOR™Rev 3 has brought the legendary tone of ELI’s analog hardware into the digital realm with even more possibilities as an ITB game-changer… just ask Jacquire King, whose work with the likes of James Bay, Kings of Leon, and Shania Twain has received 30-plus GRAMMY® Award nominations to date!