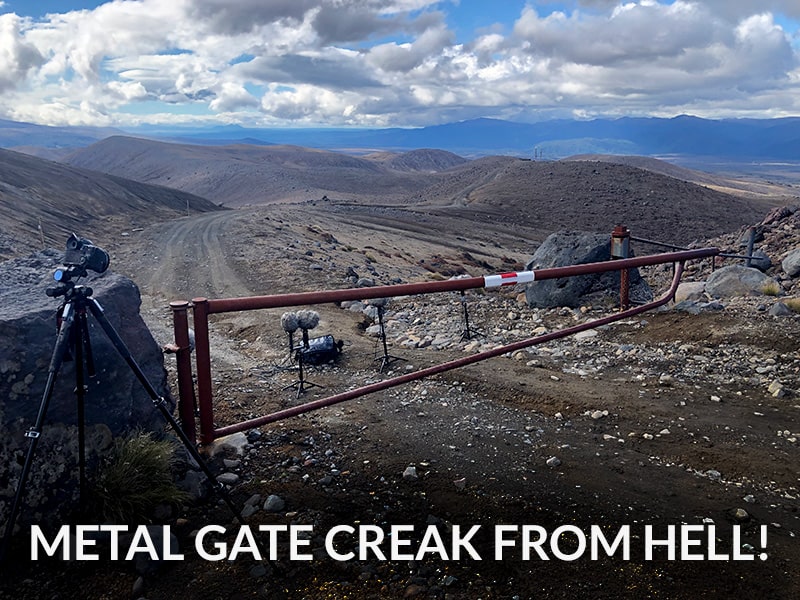 On a recent road trip, Tim Prebble spent some of his days exploring the alpine area of Ruapehu, and specifically the Tukino ski field. The landscapes are incredible – it felt a bit like visiting the red planet… To access the road up to the ski field requires obtaining a key for a security gate and as soon as Tim unlocked it & started to move the gate Tim just knew he wasn’t going anywhere for an hour: Tim had discovered the gate creak from hell!

I had found the gate creak from hell!

Being exposed to extreme weather had made the hinges and mechanism of the gate very expressive, with creaks so resonant they reminded me of guitar feedback. As an added bonus, the alpine location was almost silent.

Apart from creaks Tim Prebble also performed multiple takes of every action Tim could think of: slams, shakes, latch moves, lock & chain moves and multiple speed open, close, and movements. While editing the recordings he also duplicated every slam, impact and hit – they are included for ease of use as tightly edited metal impacts & noted in the metadata for files 11,12,13 as such.

Check out the Making Of video above to appreciate the environment and some of the sounds captured. Apart from use for practical sound effects editing and layering, the incredibly resonant and powerful creaks lend themselves to all sorts of tonal exploration.

FX009 METAL GATE CREAK FROM HELL is available now. The mailing list subscriber received a discount that expires May 23rd, 2021.