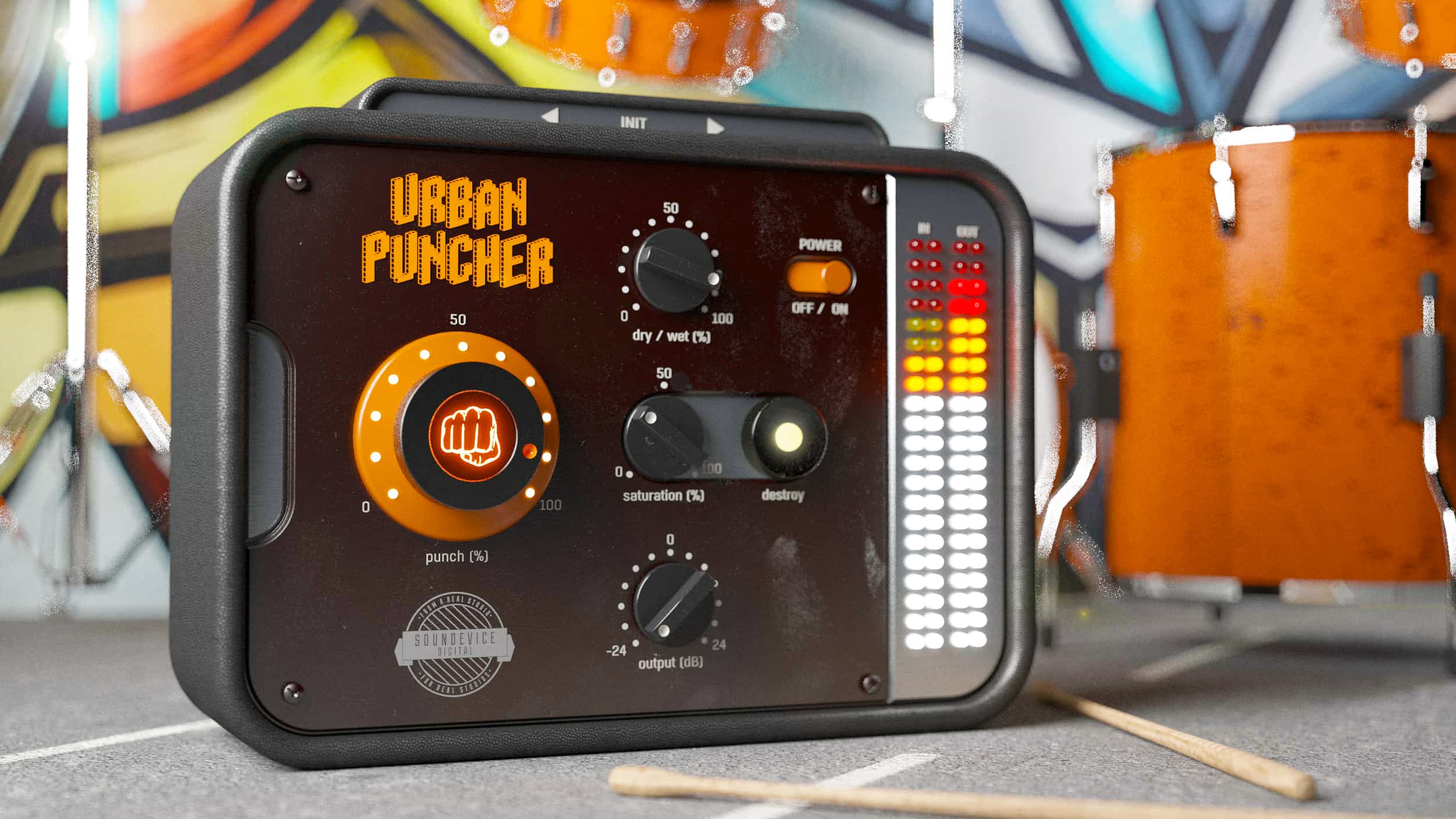 United Plugins is proud to announce the availability of Urban Puncher — provided as the latest plug-in from founding partner SounDevice Digital, effectively acting as a one-knob tool to easily add ‘punch’ to drum loops (as intended) or, indeed, anything that can conceivably be called a drum hit, resulting in percussive material musically manifesting itself with a more solid, stronger feel in next to no time.

As an established brand that is central to United Plugins, the independent development teams federation founded by people previously involved in the music industry, SounDevice Digital is named after Boris Carloff’s Prague-based SounDevice Studio, which is where the two experienced developers concerned cook up the tools they feel are missing from modern music production, putting them in the hands of the plug-in-buying public. Put it this way: with Urban Puncher, SounDevice Digital has again succeeded in doing just that, this time as a definitive drum improvement tool fit for any urban music producer.

Putting Urban Puncher to work on drum loops as is its intended use — albeit it instantly works equally well on anything that can conceivably be called a drum hit — could not be simpler. Start by loading the plug-in into a DAW (Digital Audio Workstation) drum channel (before or after an EQ or compressor), then dial up its punch (%) setting to taste (up to 100) — the more the onscreen fist glows, the bigger the punch that is applied to the drum loop — and mix the resulting sound with that of the original track using the dry / wet (%) control (up to 100) to let the magic begin as percussive material musically manifests itself with a more solid, stronger feel in next to no time. The loop being processed may well start to shine through a mix within a few seconds by basically tweaking only one knob, in other words. While that punch (%) setting simultaneously controls several processes, it can best be described as an esoteric dynamic process with transients treatment and spectral shaping.

Such simple-to-apply yet far-from-simple processing may already be enough to satisfy some urban music producers, yet Urban Puncher provides more adventurous users with a saturation (%) control (up to 100) with which they can quickly apply an analog-like transformer/tube blended emulation of saturation to give the ‘punch’ effect a completely different feel — from easily blending the drum track into the overall track more musically via subtle usage to achieving a real-deal street sound by dialing it up all the way. When hitting the destroy button, however, all hell breaks loose as this triples the amount of saturation defined by the saturation (%) control setting, resulting in a heavier form of distortion!

Other than an obvious OFF / ON onscreen POWER switch — albeit one that acts as an intelligent bypass, so no need to worry about any clicks or unwanted noise when bypassing the effect, elsewhere an output (dB) control defines the overall output volume of the Urban Puncher plug-in by +/-24dB while colorful IN (input) and OUT (output) ‘LED ladders’ also aid judging the processing proceedings from a visual viewpoint.

Ultimately, Urban Puncher’s powerful processing need not necessarily be applied to drum loops only — or, indeed, anything that can conceivably be called a drum hit, even — since the plug-in can also be pressed into playing away, adding punch to other percussive-sounding instruments, such as acoustic guitar or piano. No need to be afraid to experiment beyond the boundaries of urban music production as percussive material can musically manifest itself in other ways in next to no time, too, thanks to the SounDevice Digital-developed Urban Puncher plug-in effectively acting as a one-knob tool to add a persuasive percussive ‘punch’ to almost anything.

As implied in the carefully chosen wording for an apt appellation that really represents how the Prague-registered Limited Company came about and what it collectively creates, United Plugins is a federation of small, independent development teams comprised of individuals involved in the music industry. Indeed, the founding triad of FireSonic, JMG Sound, and SounDevice Digital can count engineers, producers, and artists amongst their ‘united’ names. Needless to say, all were seeking the freedom to create the tools that they would like to use in their studios and on their projects. And all agreed that this could be better achieved when working together. Though United Plugins’ proliferating product portfolio may not always be for the musical masses, surely someone, somewhere will always find those tools to be a perfect fit for their own music productions... just like those inventive individuals behind United Plugins’ partner brands, the ranks of which have since swelled to include Muramasa Audio and MeldaProduction. Thanks to the latter letting United Plugins utilize its super-easy licensing system, which is why selected MeldaProduction products are also available from the United Plugins website, a thriving future for the federation is assured.

SounDevice Digital’s Urban Puncher is available to purchase for a time-limited introductory promo price of only €19.00 EUR until September 20, 2021 — rising thereafter to its regular price of €59.00 EUR — as an AAX-, AU-, VST-, and VST3-compatible plug-in (using internal 64-bit audio processing capable of handling any sample rate) directly from United Plugins.

A 15-day, fully-functional trial version for macOS 10.10 and newer and Windows 8/10 can be downloaded for free from here.

Note that no iLok, dongle, or internet access is required for Urban Puncher activation. (All United Plugins software uses license files for activation and owners can freely use purchased software on all their computers as long as they are the user.)

Why Mixing on Headphones is Better