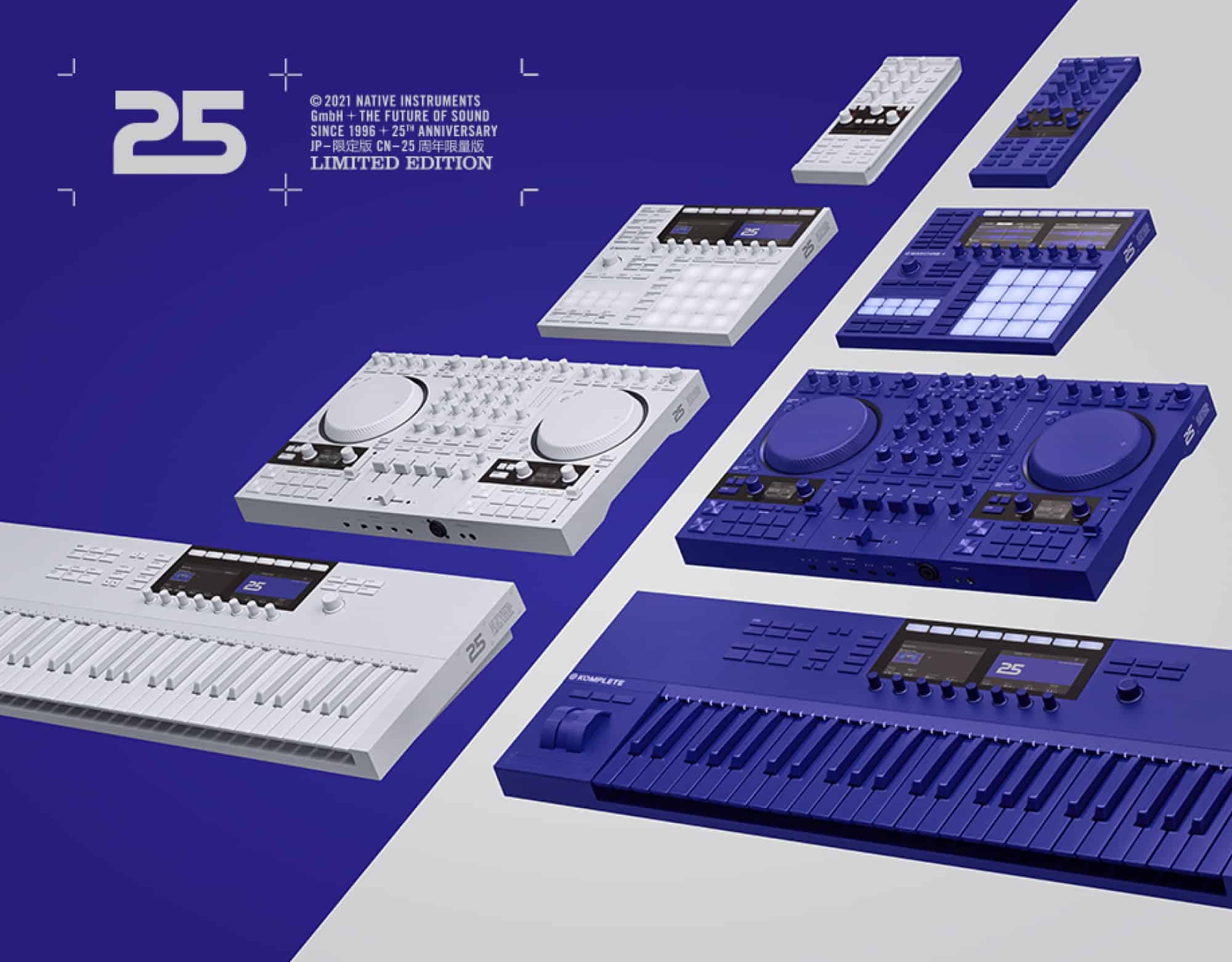 This company has been around for 25 years. They created a new extensive instrument, and it is free. Be quick, this will only be available for a limited time!

It’s been 25 years since Native Instruments released the first product in our storied history. In that time, we all have seen an evolution of music production technology and a revolution in what is possible with sound. To celebrate this milestone anniversary, Native Instruments is releasing a limited edition run of Ultraviolet and Vapor Gray hardware alongside a free Play Series instrument.

A free instrument for KONTAKT 6

What is TWENTY FIVE?

TWENTY FIVE is a brand-new, free KONTAKT 6 plugin and the KONTAKT 6 PLAYER. A Composer may construct their own sounds by combining classic settings from 37 different instruments over NI’s history.

From cutting-edge flagship synths to time-tested KONTAKT pianos, and underappreciated gems from the REAKTOR and GENERATOR archives. is a time capsule of NI’s contributions to digital music-making over the past quarter-century.

TWENTY FIVE is available until December 31 as a free download https://www.native-instruments.com/en/products/komplete/play-series/twenty-five/

What is the Native Instruments competition?

On its meta pop platform, NI is running a worldwide producer challenge. Native Instruments always looking for people who are passionate about music and like to produce new tracks or compose songs. Native Instruments invite some of the most creative artists around the world to make a song. A range of NI prizes is up for grabs, with winning entries receiving limited-edition hardware alongside KOMPLETE 13 packages. The competition runs from October 25 to December 31, 2021.

What is the Play Series?

The Play Series includes high-quality, easy-to-use instruments in an affordable package. Each virtual instrument has its own unique sound and personality, as well as a wide range of carefully created presets and targeted controls for customizing them. There’s a lot of room for personalization. Whether you’re a seasoned or novice producer, there’s plenty of opportunity for creativity. The Play Series is built for rapid production and inspiration.

What is the KONTAKT PLAYER?

The Player offers many of the features and functions found in full versions of the software, but without requiring a full installation. It’s perfect for people who want to get up and running with NI software quickly or take it on the go. While other companies are trying to separate themselves from their competitors by focusing on one particular activity or function within a software package, Native Instruments provides many functionalities all rolled into one cohesive interface.

How many instruments are in Native Instruments?

This is the best version of KOMPLETE for all producers who are looking for high-quality instruments and sounds. The ULTIMATE COLLECTOR’S EDITION includes not only the latest updates to KOMPLETE 13 but also our entire KOMPLETE collection.

Users can use this software to produce music in any genre they choose. The 122 instruments include synths, samplers, drum modules, dynamic processors, studio effect plugins, mastering tools, and more which users can mix together to produce one of the most desired tracks in the world.

The limited-edition versions of NI’s 25th Anniversary Collection are all packaged with the current and modern features, in a choice of either Vapor Gray or Ultraviolet colorways. The Vapor Gray version features silver trim to match its silver branding, and the Ultraviolet features a custom-molded black housing with ultraviolet detailing.

Native Instruments has been at the forefront of musical progress for 25 years. Native Instruments redefined the possibilities for amateurs and professionals alike by establishing communities, pushing technological barriers, and expanding creative horizons. Native Instruments’ mission to make music production more inclusive and accessible has fueled the company’s ongoing improvements in platform features, stability, and overall ease of use. Today, Native hardware, software, and digital services provide a complete platform for digital music creation, performance, and collaboration. We just cover today some of the wide products and services, there is so much more a Massive, Reaktor Prism, different sound elements, packed and all ready for your project, sound, sample, synths, and general audio work like mixing in your exclusive studio. Create audio in your genre performing with expansions and tools at a reasonable price in an overcrowded market.

Other companies’ products all have their own individual user interfaces, which can make it difficult for those who are new to music production or those who want to switch from using one product to another within a company’s catalog. With Native Instruments’, everything is contained in one easy-to-use interface. The user can click on the instruments they want to use, whether that’s a sampler or synthesizer, or plugin and it will open up all of its unique functions within this single platform.

To celebrate this milestone anniversary, Native Instruments is releasing a limited edition run of Ultraviolet and Vapor. These instruments are the ultimate in sound design with a highly flexible modular system that can be used to create new sounds or modify existing ones. Be quick though! This offer will only be available for a limited time!

How do I get TWENTY FIVE?

TWENTY FIVE is available until December 31 2021 as a free download. It runs in KONTAKT 6, or the free KONTAKT 6 PLAYER. This is will be an on news ticker search well-covered virtual instruments Kontakt instrument. Feed your daw with some love.

How do I get The 25th Anniversary Collection?

The 25th Anniversary Collection is available now from the NI Online Shop. Prices remain the same as the equivalent standard editions.