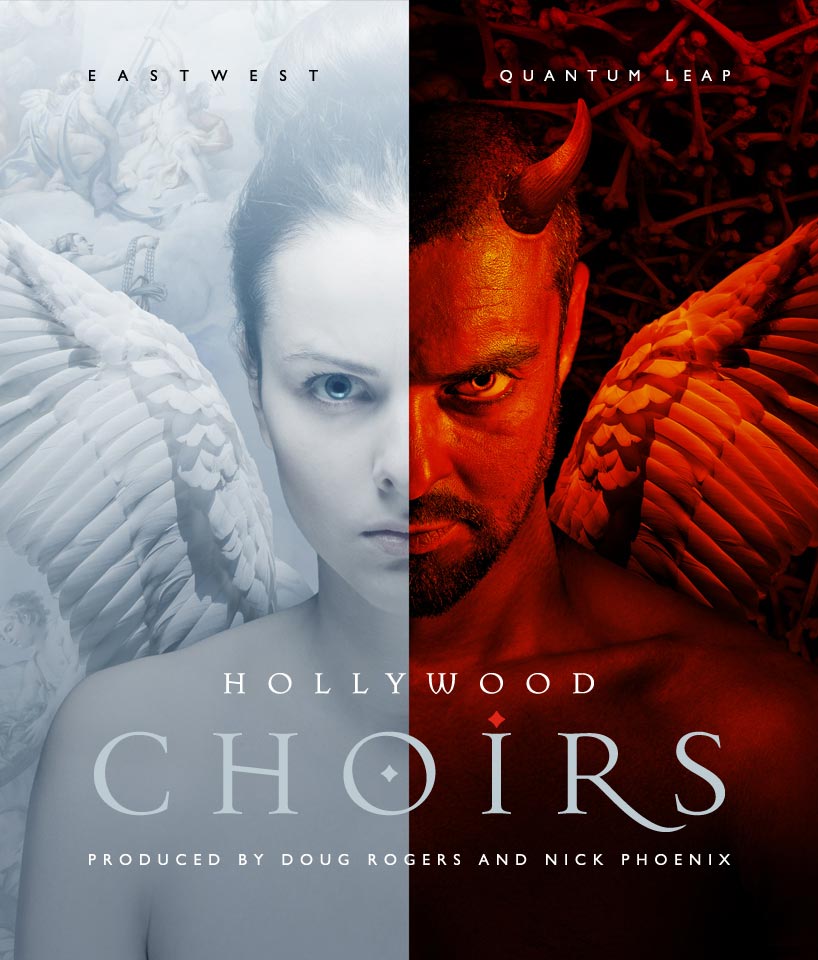 Today we are having a close look at Hollywood Choirs – a cinematic choir library developed by East West and Quantum Leap. I’ll be covering the library’s look, sound and usability to give you an overall idea of what to expect from the library.

Hollywood Choirs is designed for cinematic and orchestral use via East West’s PLAY engine, featuring multiple mic positions, a variety of vowel and consonant sustain for both male and female sections, and a robust word-builder designed to create custom lyrical performances.

The library itself doesn’t contain the PLAY engine, so that must first be downloaded and installed if not already done so. Installing the library only requires a few clicks and choose which folder to install, then the installer pretty much does the rest. Depending on which version of the library you have, it may take longer to install, but apart from that, it’s a painless procedure.

At a surface level, the provided sustains sound reasonably adequate. There are plenty of dynamics available by riding CC1, so you can get a very soft sound, and push it all the way up to double forte when needed.

The main mic position (which comes standard for Composer Cloud subscribers) is a balanced “decca tree” mic position that captures the choir with a close but reverberant sound. The close mic position is a mix of spot mics that sound drier. Still, contain the wetness of the hall. The stage mic sports a more centered reverberant sound, while the mid and surround mics are highly reverberant. While the recordings are clear, they lack the feeling of polish that much earlier Hollywood series libraries contained (mostly due to Shaun Murphy’s engineering and careful post-production). You may find yourself having to add a fair amount of EQ and compression to get the choir to stand out in a medium or dense composition.

The staccatos offered are minimal, sporting only the main vowels with 2 round robins, which don’t sound particularly majestic or inspiring.

Where the library hits rock bottom in regards to sound though is the legato vowels. At a price point of $599 for the full version of the library, I would expect to hear fluid slurred transitions between notes. That’s not the case here. When playing a note to note you may begin to wonder if you’ve loaded the wrong articulation because there are no audible slurred transitions. In fact, the library doesn’t play these “true legato” patches monophonically – instead, when overlapping notes the previously held note still sounds! There could be many reasons why this area of the library has been poorly presented and rushed, but whatever the reason, the result definitely won’t please customers looking for a real legato choir sound.

The only real star of the show is the lush sounding variety in performance when playing with the word-builder patches. By throwing in a ton of the provided word-building phrases and merely playing chords (much like playing pads), you can get a satisfying and useful sound that blends well while playing (unlike the clunky starts and stops of the original “Symphonic Choirs” word-builder from the same company). This is the sum of the library’s parts, all things considered.

With the many advancements in interface ergonomics and intuitive patches that have come to light in the recent years from many different sample providers, customers expect to get a “next-gen” experience when buying premium-priced libraries. Especially in the world of choir sampling, features like marcato and staccato phrases, phrase legato, choral fx and other nifty options have become commonplace.

With Hollywood Choirs, East West has stuck to the old ways when it comes to the interface. There are no advanced controls beyond ADSR, stereo widening and other essential features provided in the PLAY engine – and to make things worse, every articulation can only be accessed via individual patches, with no way to key switch between them. The world-builder is a strong addition to the library, but it’s not a fun thing to use indeed. It requires patience and a knowledge of the library’s own “Votox” phonetic alphabet to get the most realistic results truly. By all means, Hollywood Choirs does sound and feel like it came from the past. There’s no real motion or emotion contained in the library, due to its complete lack of comprehensive legato sampling.

Rating:  Two out of five stars

Of course, the library does have its practical use – as mentioned before, the word-builder patches can be played to achieve a unique and moving sound, but ultimately that is all the library amounts to. Features like marcatos, staccatos, legato and advanced user control are just absent in this library, which limits its usefulness and its appeal for most composers. What detracts from practicality the most though would have to be the library’s premium price, which it – for all intents and purposes – is not deserving of.

Those who are already subscribed to the Composer Cloud won’t have any trouble throwing this library onto a track now and then to get some realistic vocal results, but anyone looking to purchase a full priced choir library, I’d recommend looking elsewhere, as there is a wealth of truly greater – and more affordable – choir libraries on offer in many other places.

To improve the rating of the library would need fluid slurred legato as a feature. In order to be a market leading and great library though it would need to offer all the features and patch ergonomics that other libraries feature (variety of marcato and staccato phrases with round robins and maybe some choral fx) and it would require some serious re-mixing.