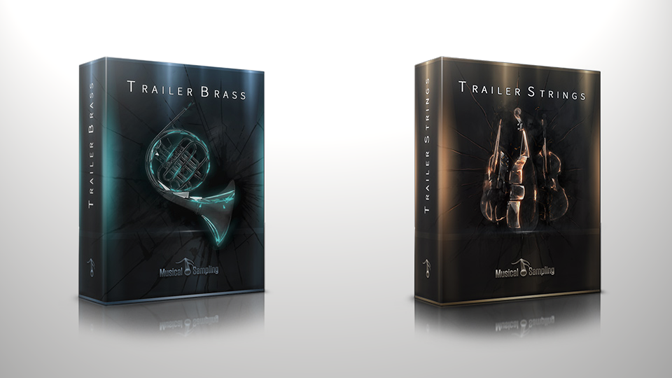 There are many cinematic and orchestral libraries floating around. When it comes to hybrid scoring, composers look for the quickest and most polished sounding packages that cover common elements, such as brass and strings. Today we’ll be looking at a package created for fast and epic cinematic scoring with those two elements – Trailer Brass and Trailer Strings by Musical Sampling.

Musical Sampling is a relatively newer sample developer that covers cinematic orchestral libraries such as Adventure Strings and Brass, and the wonderful Soaring Strings. They’re designed for ease of use, a great sound out of the box and fast composition.

The Trailer Bundle consists of Musical Sampling’s Trailer Brass and Trailer Strings libraries packaged together, which delivers a horn section, trombone section, low brass section and designed effects for the brass – then violins, violas, celli and basses with various essential articulations and effects for the strings. Both libraries have a close and far mic option as well as a mixed mic option.

The library is easily downloaded and installed to your folder of choice using the Connect downloader, and requires the full version of Kontakt.

Trailer Brass doesn’t fool around – you’re given staccatos and sustains for each section, and they sound great straight up. The ten horn ensemble sounds sonorous and massive while maintaining detail, and is great for melodies and pumping rhythms. The ten trombone ensemble is fat and sharp, with cutting staccatos and noble sustains, and great low-end projection – there are also cluster and stab effects supplied for the trombones to cover trailer accents and hits.

Then there’s the cimbassi and contrabass tuben ensemble (appropriately named “The Horde”), which is a devastating low-end onslaught that’s hard to beat when it comes to epic brass sounds. This ensemble is best used for bass note beds and occasional accents to fill out your score – or if you’re a trailer composer, push the mod wheel up, hit two octaves on the keys and watch the audience retreat in terror. Meanwhile, the provided slams, hybrid braams and cleverly designed effects that come with the library are also time savers when it comes to getting that epic, hybrid sound effortlessly.

The close mics provide plenty of detail and an in-your-face sound, while the far mics provide a rich bloom and spatial presence, so depending on what you’re going for, this library will likely accommodate. While the library is essentially aimed at hybrid and trailer productions, the recordings still have a natural character that works well in more traditional genres, as the softer dynamics of the brass have also been well captured.

Surprisingly, the strings don’t sound as staunch and aggressive as one would expect of typical trailer scores – they have a detailed airiness about them that sounds more lush and genuine. The long notes are bold with strong vibrato, while the marcatos are sweeping and expressive. The staccato has a more leisurely stroke than most libraries (which is good), and the spiccatos are balanced and expressive.

Overall the short notes for Trailer Strings are among the more focused and useful for varying applications I’ve come across, which isn’t a common thing. The 18 violins are classy, the 16 violas are bold, the 14 celli are dark and the 12 basses are chocolatey, just as you’d expect from a large string ensemble, but they don’t necessarily sound as bloated as some similarly large string ensembles, which is interesting. These strings pair quite well with Soaring Strings actually.

The sustains are alternatively provided with the soft dynamics only, which sound great for soft pad work and sul tasto style tones. We’re also given col legno slaps, stabs, broods and scrapes for the celli and basses, so moody scoring is covered as well.

The close mics are warm and thick, while the far mics have a more regal presence. You can hear an example of the sounds below:

As with all libraries from Musical Sampling, the instruments in Trailer Brass and Trailer Strings are housed in a sleek and utterly simple interface that requires no explanation. Scores can be made with ease, and there’s no fussing about when it comes to articulations, as the provided ‘Adventure’ patches contain the regular articulations without the need for keyswitching – although keyswitch patches are provided as a container for picking the articulation you want, they aren’t designed for on the fly keyswitching. It’s about as simple as you could get while still being comprehensive and deep enough to tackle many scoring applications.

One could argue that the brass sections don’t sport enough articulations, or that there aren’t any trumpets to be found, or that there’s no legato in sight… but when you think about it from the practical perspective, and if you’re in the heat of throwing together a top sounding track during the crunch hours, you’ll realise what the library does is it meets the composer half way – there’s no need to think about what to do with a barrel of brass or string sections, or argue with yourself over the “right” way to seat them or compose for them. 3 brass sections, each with a primary application for short or long notes. 4 string sections, each designed to play their part according to the context rather than the theory. It’s simplicity is its beauty.

While this package is seemingly designed to only work wonders with trailer scoring, it in fact also works wonders for many other types of scoring and helps the composer along while doing so. Trailer Bundle is rock solid, and although the price may be slightly above comfort for some, you’ll get a fair few miles out of your purchase – and the recordings play very well with reverb, which is a godsend.