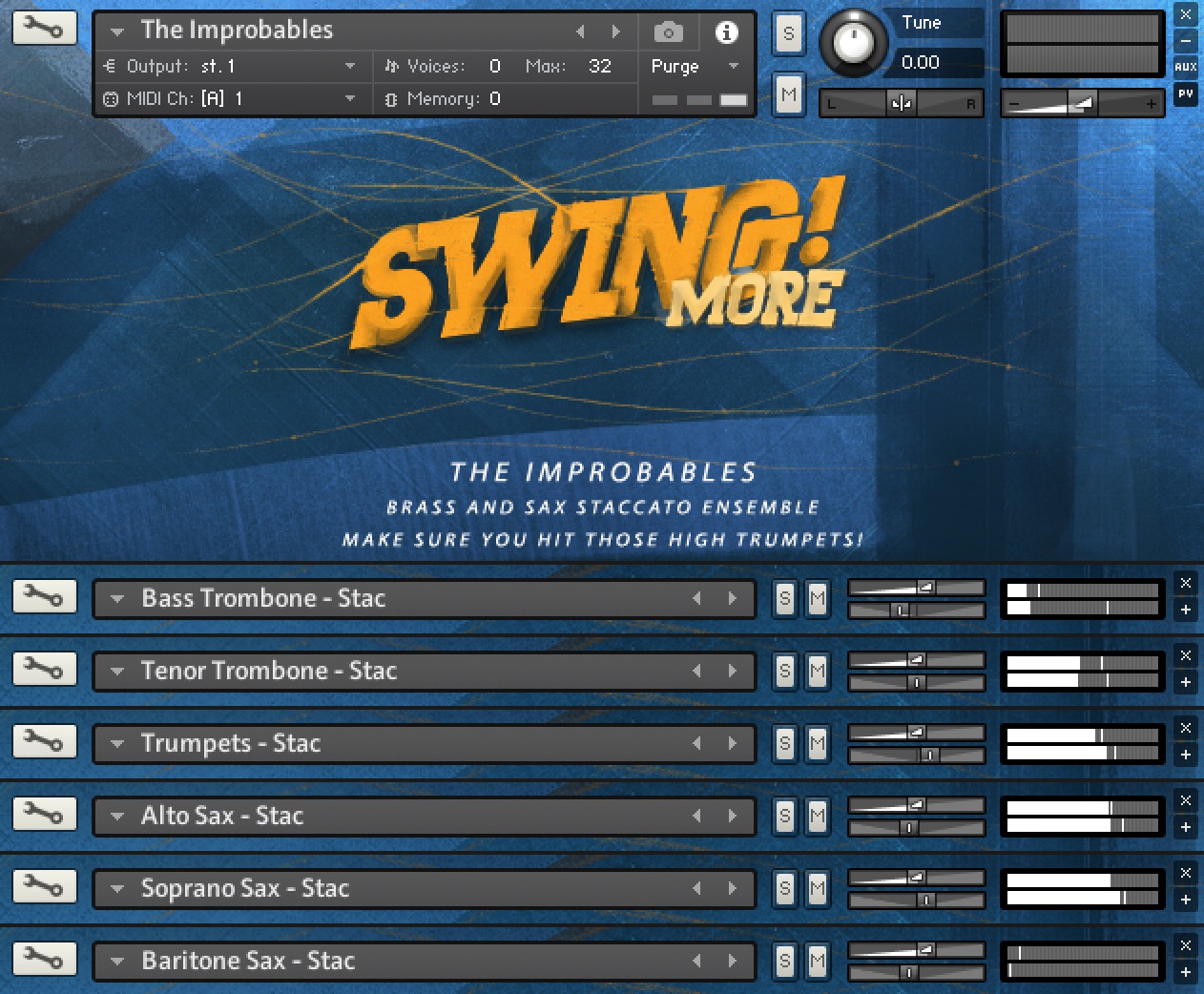 Swing! More was released by ProjectSAM after the extensive success of Swing!. ProjectSAM is part of a small selected group of the leading Kontakt 5 sample library producer. Swing More! is a film orchestra library and unique in this market.

Big band and jazz have a long history in film music, dating back to the early years of animation and continuing through the gritty drama of film noir. It’s true that we adore the sound of a symphony orchestra; it only tells one aspect of the tale.

The library is filled with beautiful and lush-sounding string sections, intimate jazz combos, a big band, a gospel choir, and some sensational soloists. The sound of the instruments just jumps out of your speakers!

One of the things I love about this library is that it can be used in so many different ways. You could use it for simple jazz tracks, or for more elaborate orchestral pieces. The possibilities are endless!

The only downside to this library is that it’s a bit on the expensive side. But, in my opinion, the sound quality and versatility of the library are well worth the price. If you’re looking for an amazing-sounding film orchestra library, then I highly recommend Swing More! by ProjectSAM.

A film composer is a musician who writes and performs original music for films. The role of the film composer has evolved over the years, but they typically work closely with the director to create a score that enhances the emotions of the story.

Film composers often use a mix of traditional instruments and electronic sounds to create their unique soundscape. Some of the most famous film composers include John Williams, Ennio Morricone, Hans Zimmer, and James Horner. While each composer has their own unique style, they all share a common goal: to create a musical experience that is powerful and memorable.

If you’re a film composer, then you know how important it is to have a great-sounding orchestral library. Not only does it make your work sound more professional, but it can also save you a lot of time and effort in the long run. Fortunately, there’s no shortage of amazing-sounding film orchestra libraries out there.

Swing! More includes a vast number of instruments. It has the vibe of a Big Band and can be used to produce very believable scores in the noir and Big Band genres.

ProjectSAM positions this library as a fit when you score to picture. Be it from the initial years of animation to the dusty scenes of film noir. You can always use a great big band or a library that supports an official jazz line.

ProjectSAM builds a collection of several multis included in Swing! More. If you want to look at a deep dive into all instruments and multis, I recommend watching YouTube Guy Rowland videos on this excellent library. His videos are longer than usual but provide an excellent overview of what is included in this masterpiece.

The full, rich sound of a big band can really bring a movie to life, adding drama and excitement to the story. In addition, the big band sound is also perfect for creating a nostalgic or romantic mood. When used in a film score, these chords can transport audiences back in time or transport them to another place entirely. Whether you’re a fan of big band music or not, there’s no denying that it can add a lot of depth and feeling to a movie.

The film score for Jazzy Legato Clarinet was composed by renowned musician Hans Zimmer. The score features a mix of classical and jazz influences, which helps to create a unique and memorable soundscape.

The use of clarinet throughout the score helps to evoke the feeling of summer, while the upbeat tempo keeps the viewer engaged. The score also features a number of memorable themes, including the famous “Leaving Los Angeles” theme, which has become synonymous with the film. Overall, the score for Jazzy Legato Clarinet is a perfect example of how music can enhance the viewing experience and help to create an unforgettable film.

There is excellent sounding piano included as shown below.

If you want to learn more about the difference between Swing! and Swing More! and which one to choice ProjectSAM has released some guidance:

Swing More! UIs are quite lovely and clean, really straightforward to use and well designed by the ProjectSAM team.

ProjectSAM Swing! is an intriguing addition to a composer’s sound library, as a whole.

Swing More! is an excellent library for creating big band music. It features a variety of instruments and multis, allowing you to create a really big band sound. The library is easy to use and well designed, making it perfect for film scores.

You have articulations, phrases, strums, grooves, runs, and other percussive elements. The Big Band Chords patches are particularly impressive because they include 12 ensemble chords for each of the 12 root notes – instant jazz! For many people, the word “jazz” conjures up images of smoky nightclubs and talented musicians improvising on their instruments. While this is certainly one side of the jazz world, there is also a growing trend toward what has come to be known as “instant jazz.”

This type of jazz is based on the use of pre-recorded tracks that provide the foundation for a live performance. The advantage of this approach is that it allows performers to focus on their playing, rather than worrying about memorizing complex chord progressions or arranging parts for other instruments. As a result, instant jazz has become an increasingly popular way for audiences to enjoy this unique musical style.

ProjectSAM has developed such varied libraries as Symphobia 1 and 2, Lumina, Orchestrator and Animator, as well as True Strike and Orchestral Essentials.

It’s a pleasant surprise to find Toca Bocca release Swing!, a jazz-themed library with woodwinds, brass, the rhythm section (including nylon string guitar and ukulele), and percussion, which is based in the Netherlands.

The SAM Swing! Kontakt library is a one-of-a-kind resource dedicated to a specific musical genre and style. This library’s sound is reminiscent of big bands such as Glenn Miller and Paul Whiteman, although it has also been influenced by Stan Kenton.

It is, nevertheless, not only a “big band” or “film noir” library; it is both. Users can reminisce in the sounds of composers such as Lalo Schifrin and David Raksin on the film noir side.

I was very pleased with the organization of the patches, as well as the sound quality, particularly from the saxes (including glissandi and growls) and trumpets (both muted and non), especially given that it was recorded “live” in a church.

Swing! More by ProjectSAM is the leading library for the film noir genre. If you are up for more sounds with a similar vibe you should definitively look at the Swing bundle (Swing! and Swing More!) if you obtain both libraries, you can realize a costs reduction.

I look forward to the possible third Swing library release, perhaps called Swing EvenMore! (no name has been shared, and there is no third party announced).

Swing! isn’t as big or comprehensive as other libraries in the “film-noir” and “jazzy film scoring” genres, but it does a good job of addressing a wide range of topics.

The huge selection of songs in this library is a fantastic place to begin if you want to write music in this style. Swing! is an interesting and innovative song that lets you go wild with your creativity while still creating wonderful music.

Swing! More by ProjectSAM is the leading library for the film noir genre. If you up for more sounds with a similar vibe you should definitively look at the Swing bundle (Swing! and Swing More!) that if you obtain both libraries, you can realize a costs reduction.

I look forward to the possible third Swing library release, perhaps called Swing EvenMore! (no name has been shared, and there is no third part announced).