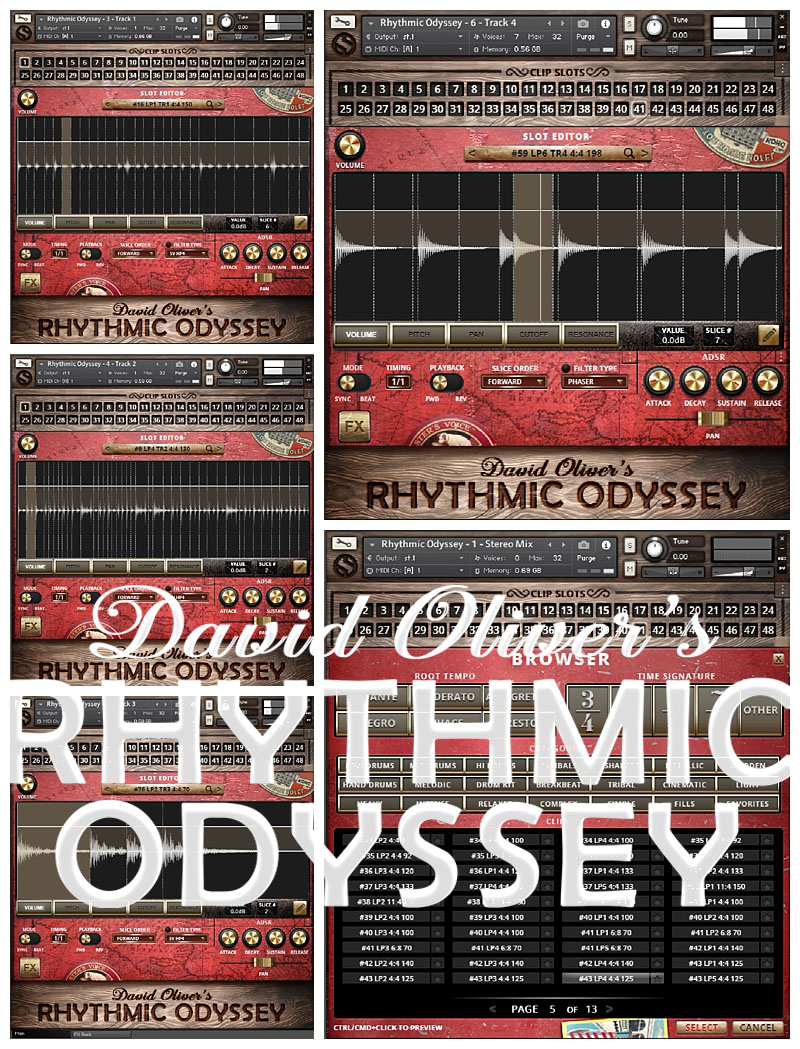 Rhythmic Odyssey by Soundiron is under review today. SoundIron released a comprehensive and unusual percussion groove library presented by distinguished instrumentalist David Oliver from the UK. David Known is known for his brilliant, expressive soundtracks for award-winning programs such as the BBC and National Geographic.

Rhythmic Odyssey is a loop-based percussion instrument with deep and stylistically expansive collection focuses on dynamic tuned/un-tuned performances by British instrumentalist and composer David Oliver. Soundiron did send a review copy with no strings attached.

It is a Kontakt library, you use the provided tool from Soundiron to download the library and install it. It is a Kontakt library, includes also the supporting Wav-files to allow you to use the loops in any DAW. It is 12.6 GB Installed. It comes as 24-bit, 48 kHz Stereo Lossless NCW Format and as well is delivered as 24-bit, 48 kHz Stereo PCM Wav Format for the Unlocked Wav Library for use in any DAW.  Native Instruments Kontakt Player or Kontakt (full version) required, version 5.7.3 or later.

The content of Rhythmic Odyssey all based on David Oliver’s original rhythmic compositions has been broken down into seamless loops, with tangible musical evolution and dynamic progression developing normally from intro and build-up to climactic release.  These building blocks can be mixed and matched to create your own unique layered rhythmic combinations.

David has captured an incredible variety of percussion instruments and objects, exploring everything from drum kits to raw pine tree logs. This library spans a huge range of styles and genres, from traditional ethnic arrangements and combos to raw, hard-driving percussion beds and huge rock grooves. Each song is a tonally rich and creatively inspired piece, with unique arrangements and exotic instrumental selections from all over the world.

This library shines when you need to add movement through percussion. Many will use the percussive loops for underscore and drive emotion and mood when scoring to picture or in trailer – ads sound to me like a natural fit as well.

That you receive besides the Kontakt instruments all sounds as WAV-Files makes it easy to use elements in the sound design and do not forget to use your preferred FX plugins that help you with sound design normally.

Rhythmic Odyssey has that new sounds that have not be available to you in one library and comes with a huge collection of Davids performances. On top of that, you can use the interface features to come up with endless variations (and use external plugins…)

The UI has to cope with an enormous variety of sounds and rhythmic variations of percussive sounds. The UI is in done in the typical Soundiron style and comes with an innovative interface and potent engine features to provide you with an extensive toolbox to support you in creating and experimenting creatively.

The UI supports shaping of each loop down to the single transient slice, with playback direction, slice order, ADSR and custom step-automation sequencing for volume, pitch, pan, filter cutoff and resonance parameters that you can freely draw with your mouse.

The used performances have not been captured as midi, that would be a great option to have to easily replace some instruments used and combine this library with other libraries.

Rhythmic Odyssey by Soundiron is carefully and flawlessly hand-crafted collection of percussive sound that can easily be included into a track when you score to films, trailer, games, ads and more. Soundiron and David give you access to an extensive collection of drums, percussion, and other rare world-instruments.

Omnisphere 2.5 update is available to the public now