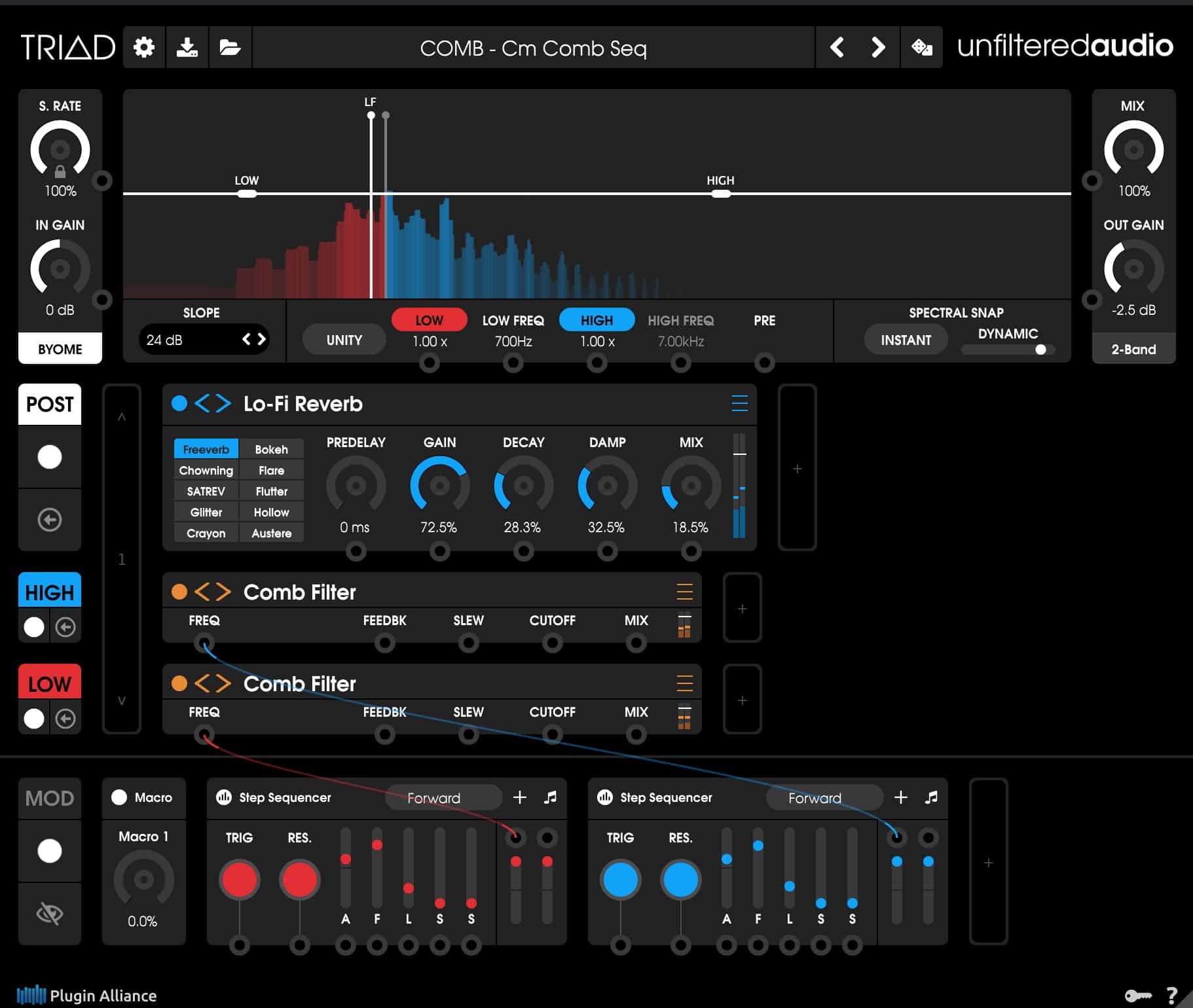 TRIAD builds on the success of BYOME, Unfiltered Audio is at it again with their latest creation, Triad. With the ability to split up the signal into three bands and apply BYOME effects to each band individually, this three-headed beast will put the rest of your plugins to shame. BYOME is Unfiltered Audio most energetic effect yet. You can use a so-called cell as an individual effect and combine them to build your own modular effect. TRIAD does load your BYOME presets.

Some say that good things come in threes. TRIAD literally lives up to that saying — in name and nature. Why? Well, with an ability to split an audio signal into three bands and apply BYOME effects — themselves tapping into Unfiltered Audio’s abundant MOD (modulation) control choices via virtual cables (conceptually similar to establishing all the connections between the separate modules on a modular synth system with patch cables to generate tones and sound effects) — to each band individually, this three-pronged approach to multi-band processing par excellence easily has what it takes to stand out from the sound of the crowd.

Presets fit for Unfiltered Audio’s latest and greatest creation have been carefully crafted by acclaimed artists and world-class sound designers to showcase its individualistic capabilities, covering functional frequency splitting to putting it through its innovative paces as the most advanced multiband processing plugin around.

TRIAD truly advances the phenomenal possibilities of its single-band BYOME predecessor by bringing a new level of control to the myriad of onboard effects. Essentially, then, it is a three-band frequency splitter capable of processing the LOW, MID, and HIGH-frequency bands with different effect rows, consisting of 40 effect cells arranged into eight categories; each effect cell can be expanded and added to. These range from multi-band compression to frequency-dependent reverb, complex distortions to intricate delays, plus pitch shifting and an array of modulation-based effects — all of this and much more besides are a breeze to set up and control.

Readily refrain from using any of the effects — easier said than done, admittedly — and TRIAD can be used as a ‘flat-sum’ frequency splitter with adjustable cutoff points, guided by a first-rate FFS (Fast Fourier Transform) visualizer that displays the signal and allows for precise control over the band amplitudes and cutoffs on the fly. Furthermore, the DYNAMIC SPECTRAL SNAP feature allows automatic frequency cutoff balancing — an industry first, while well-crafted tools like Auto Cutoff and Unity Gain will keep the frequency distribution balanced between the bands, or even adjust the amplitude ratio without any overall volume change. Critical listening required? Simply solo or mute any of the individual bands with one click.

Changing the frequency splitting into a number of other multi-band processors — namely, 2-Band, 3x Parallel, 2x Parallel, Mid-Side, and Left-Right — maximizes effect routing possibilities. Many modes have a flexible Pre/Post row that can quickly swap positions from the start of the chain to the end, turning the tables on patches for facilitating speedy sound design workflows. With that thought in mind, TRIAD features a unique Permutation engine that rotates the function of each active band. Put it this way: what, for instance, if a user had an amazing delay set up on the MID frequency band, but would rather hear it instead applied to the HIGH-frequency band? Then their wish becomes TRIAD’s command by clicking on the Permutation arrows to hear it exactly as they wanted — without destroying the rest of their preset.

TRIAD takes Unfiltered Audio’s Build Your Own Modular Effect technology to new heights, combining state-of-the-art processing, versatile modulation, dozens of powerful effects, and a limitless multi-band workflow with all the power of BYONE — but now in three dimensions. Discerning sound designers and artists alike should seriously consider checking out TRIAD today, traveling to sonic vistas that they have hitherto heard only in their dreams.