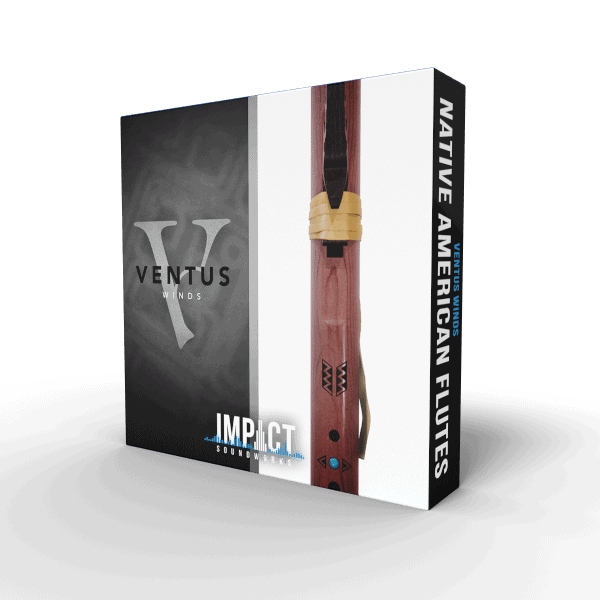 Ventus Native American Flutes is the seventh entry into Impact Soundworks’ highly acclaimed series of deep-sampled woodwinds and flutes from all over the world. This collection includes three distinct, traditional Native American flutes, each handcrafted in the historic town of Patagonia among majestic mountains.

The sounds of each flute – the Red Tail Hawk, Pocket Cedar, and Contra Bass – are evocative, meditative, and soothing in tone. You’ll find them immediately inspiring, with lovely melodic voices, and individually distinct pitch ranges. They’re highly suitable for solo playing (particularly with a bit of spacious reverb) but work equally well alongside ensembles, in genres ranging from jazz and New Age to film scores and ambient soundscapes.

Each flute has a distinct timbre and playable range, and is represented in great detail with authentic ornament articulations, expressive vibrato, agile legato, and a range of breaths, noises, and clicks to breathe life into MIDI performances.

With Impact Soundworks’ latest Agility script engine, it’s easier than ever to achieve a sonorous and expressive performance using only your MIDI controller or piano roll. You can automatically trigger ornaments without lifting a finger, or create custom articulation mapping to suit any DAW or workflow. Plus, you don’t even need external FX thanks to the powerful Console script providing dozens of FX modules at your fingertips.

Composers will find the playability of the Native American Flutes highly responsive, and easily customizable. Ornaments can be triggered automatically, or custom-mapped to fit the user’s workflow and MIDI device (even EWIs are easily supported.)

Ventus Native American Flutes includes the latest version of TACT, allowing you to customize how all articulations are mapped and triggered! Everyone has their own preferences for how to perform or write for virtual guitar, and with TACT you can create the perfect setup for your DAW.

Ventus Native American Flutes is available now for the introductory price of $79 (MSRP: $99) through the end of the year, or just $59 with a crossgrade code (check your email to see if you can leverage the crossgrade offer). The full version of Kontakt is required.