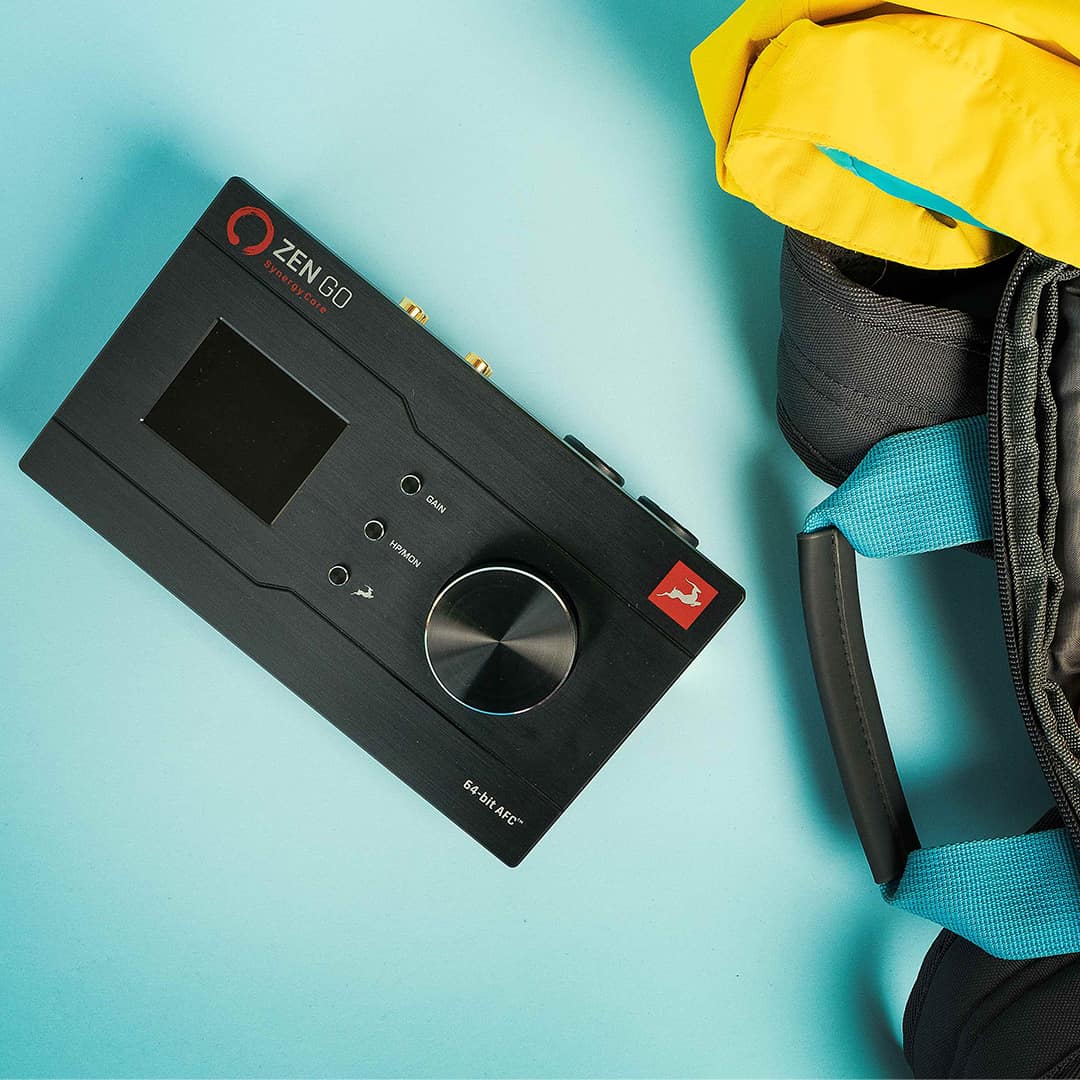 The turning point for your recordings

The Zen Go Synergy Core shrinks the sound-quality gap between artists, engineers, and producers with access to high-end studios and those working from home. The core technologies that placed our premium devices in some of the most revered recording studios are now accessible in a much smaller format at your fingertips.

As Antelope Audio’s first bus-powered, truly portable audio interface, Zen Go Synergy Core certainly lives up to its apt appellation, thanks to housing the company’s critically-acclaimed AD/DA (analog-digital/Digital-Analogue) converter technology, namesake Synergy Core onboard effects processing platform, and proprietary 64-bit AFCTM (Acoustically Focused Clocking) algorithm, supporting sample rates of up to 24-bit/192 kHz to deliver the same rock-solid stability and acclaimed sound that has helped its audio interfaces find favor with the most reputable recording studios in the world — without making any compromises. Consummate results are always guaranteed whenever Antelope Audio’s AFC technology is involved, and in that regard, Zen Go Synergy Core is no different to its Synergy Core-badged bigger brothers.

By being able to choose from 80-plus analogue-modelled real-time effects, transforming tracks with sought-after sounds is the order of the day — during live tracking or post-production, adding a distinctive analogue flavour to the mix. While working ITB (in-the-box), 37 emulations of some of the world’s most coveted and hard-to-find analogue studio gear are accessible for free.

But better still, since those real-time effects are hosted by Synergy Core as a proprietary processing platform uniting the power of DSP (Digital Signal Processing) and FPGA (Field-Programmable Gate Array) processors, this means that owners of Zen Go Synergy Core can immerse into this experience with imperceptible latency, allowing for direct monitoring of the processed signal in real-time for the most enjoyable recording experience, while also offloading all processing to the audio interface itself — no need, necessarily, to rely entirely on a host computer’s CPU (Central Processing Unit) and memory capacity or any external DSP accelerators, in other words.

Far from having to rely on the average-grade preamps found in comparatively-priced competing audio interfaces, Zen Go Synergy Core features the same ultra-linear preamp circuit found in the reputable British and American recording and mixing consoles of the past. Planted firmly in the present, this design’s high-gain structure and transparency make it a perfect match for any type of microphone. Musically vintage sound experiences, of course, can easily be achieved by loading a legendary preamp emulation as a real-time Synergy Core effect, enhanced still further when working in perfect harmony with one of Antelope Audio’s Edge series modelling microphones with real-time use.

Zen Go Synergy Core duly delivers one of the highest AD/DA specifications with a mastering-grade monitor output boasting a 127 dB DNR (dynamic range) bringing width, separation, and detail to not only new recordings but to all tracks. Being bolstered by Synergy Core readily ranks it as the most powerful onboard effects processing-capable audio interface in its class. It is perfectly positioned, therefore, to bring studio-quality recording to the home — or, indeed, any remote recording location made more easily accessible by the truly portable nature of its implementation — with critically-acclaimed conversion and preamp design plus an array of professional features on hand, helping next-generation producers to take their sound to the next level. Location recording engineers; home-/bedroom-based producers; beat-makers; self-recording artists; traveling musicians; recording engineers needing a second, smaller audio interface; and modern-day ITB mixing and mastering engineers all could conceivably consider Zen Go Synergy Core as a recording match made in heaven. Someone sang the words a heaven is a place on earth as part of a worldwide hit recorded over three decades ago at the world’s most awarded studio complex in Hollywood, CA, USA; ultimately, recording (almost) anywhere on earth is now perfectly possible with Zen Go Synergy Core!

Zen Go Synergy Core will be shipping in Q1 2021 — at a projected price of $499.00 USD/€499.00 EUR — and available through Antelope Audio’s growing global network of authorized dealers. Or order online directly from Antelope Audio.