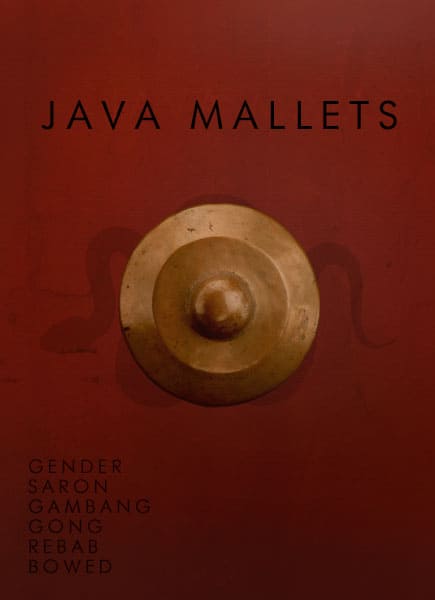 Java Mallets is an inspirational instrument that offers a selection of unique mallet sounds combined with a mythical Indonesian flavor. Because of its particular character, it suits a lot of many styles of music.

Cinematique Instruments obtained the traditional sound aesthetic of a Javanese gamelan orchestra in particular and performed it to fit their special way of thinking about what Cinematique Instruments expect from instruments to make modern music with – and it doesn’t matter if it’s a cool movie score or a fine pop song. Each instrument is equipped with multiple articulations to provide a wide range of sound possibilities.

Gamelan is traditional ensemble music from Indonesia based around mallet instruments, most commonly metallophones. For Java Mallets, Cinematique Instruments was inspired by the Javanese style tradition which is characterized by a softer nature.

For a long time, Cinematique Instruments has been fascinated by the unique timbres the Gamelan offers and have been searching for a way to capture them to implement the sounds into our music.

Searching for an opportunity to record Cinematique Instruments formed a cooperation with Rautenstrauch-Joest-Museum and their curator Hartmut Zänder to record their exhibits. While the orchestra of the Rautenstrauch-Joest-Museum consists of instruments that were built around 1900, the private collection of Hartmut Zänder contains modern built instruments which bring new colors to Java Mallets.

Gender / 5 Articulations
Is a metallophone consisting of thin bronze plates suspended over tuned resonators. We played our gender instruments with Tabuh, hammer, rubber mallet, finger and brush. It mainly consists of a Slenthem in the bass, a Gender Barung in middle range and a Gender Panerus in the highs.

Saron / 5 Articulations
Is a metallophone consisting of thick bronze plates placed over a resonating frame. We played our Saron instruments with Tabuh, yarn mallet, rubber mallet and knuckles. It mainly consists of a Saron Demung or Slenthem in the bass, a Saron Barung in middle range and a Saron Panerus in the highs.

Gambang / 3 Articulations
Is a idiophone consisting of thick wooden plates placed over a resonating frame. We played our Gambang instruments with tabuh, hammer and rubber mallet.

Rebab / 4 Articulations
Is a bowed string instrument with a drum like resonance body. We offer a yarn stringed and a metallic stringed option each played plucked and spiccato.

Bowed / 4 Articulations
For further sound design options we bowed a gender, a saron and a rebab as well as we rubbed a big Gong Ageng.