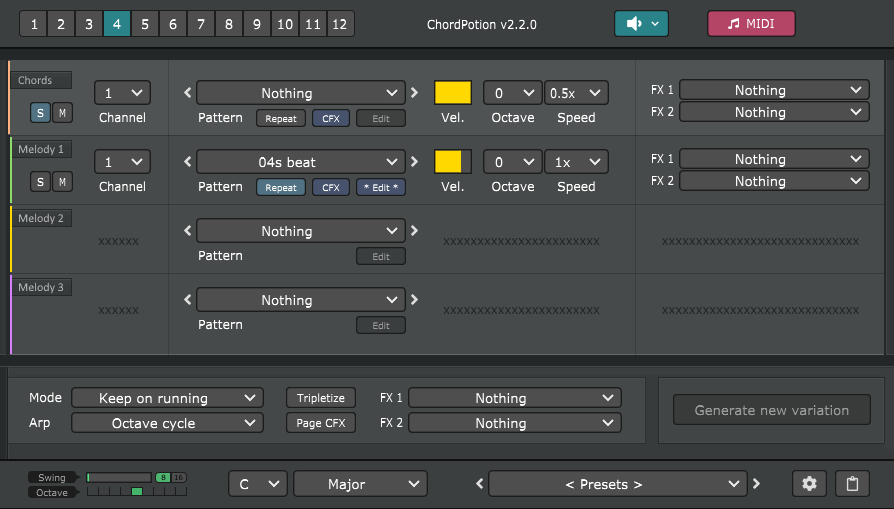 ChordPotion is a composition and performance tool that may transform any chord progression into new riffs and melodies in under a second. With real and expert patterns that react to your chords, you can improve the quality of your songs and arrangements. To make your own distinct recipes, combine and modify various playing techniques.

The new ChordPotion 2.2.0 version adds a variety of choices to not just work with chord notes, but also to create melodies with other scale notes. To make even more complicated music and phrases, combine and mix the different sequencer modes.

ChordPotion, the popular MIDI sequencer and effect plug-in by FeelYourSound has been updated to version 2.2.0. The new update comes with several new features and improvements, chief among them a revamped user interface that makes the plugin even more intuitive to use.

ChordPotion is a MIDI plug-in that converts incoming chord notes into entirely new phrases, rhythmic chords, and melodies. Combine different rhythmic patterns with each other to create your own works of art. Choose separate settings for each transformer row to generate complex sections swiftly.

You may also export the completed product as standard MIDI files. This allows you to quickly and easily create new songs while experimenting with different playing techniques.

What is a MIDI sequencer?

A MIDI sequencer is a software application that can record, playback, or edit Musical Instrument Digital Interface (MIDI) data.

With ChordPotion you can improve versions and arrangements of your songs and harmonies with genuine and professional rhythms that respond to your chords. You may combine various playing methods to generate your own distinct recipes by mixing and matching different styles.

In the updated ChordPotion, you now have more choices to work not just with chord notes, but also scale notes for melodies. This will let you create even more complicated phrases and music. The different sequencer modes can be combined as well to come up with even more unique results.

The ChordPotion melody generator plug-in has been updated to version 2.2.0, which comes with several new features and improvements. The main new feature is the ability to create melodies with other scale notes, in addition to chord notes. Additionally, the user interface has been revamped to make the plugin more intuitive to use.

If you are looking for a powerful MIDI sequencer and effect plug-in, be sure to check out ChordPotion by FeelYourSound. The new version comes with several new features and improvements, chief among them a revamped user interface that makes the plugin even more intuitive to use. So why not download the demo and try it out for yourself? You may be surprised at just how powerful this little plug-in really is.

Composer May Care About 432 Hz Tuning: The Frequency of Bliss