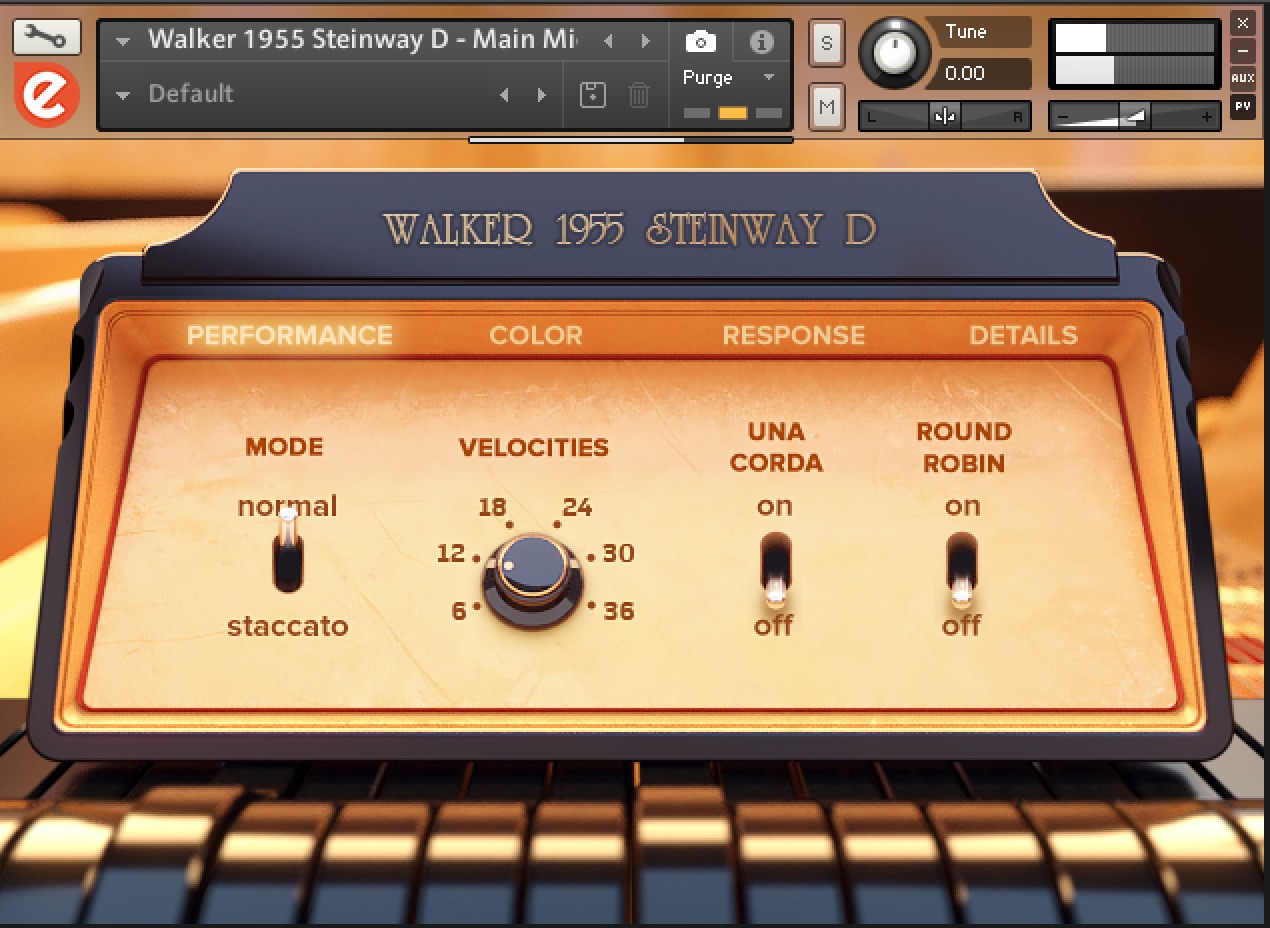 Yet another piano library has landed, and it’s again another Steinway D – possibly the most sampled grand piano of all time alongside the Yamaha C7 – but this time it’s from the folks at Embertone, and it weighs in at a hefty 200G for the full library, so today we’ll be seeing just how Walker 1955 Steinway D holds up when compared to other modern offerings.

Embertone has been around for some time, designing highly specialized libraries with advanced playability and scripting. Examples include the Intimate Strings soloist libraries, Crystal Flute and Chapman Trumpet among others.

They’ve gathered a reputation for being perfectionists, so the Walker 1955 Steinway library has big expectations to live up to. The library provides pedal up and down sustains with and without the soft pedal (una corda), staccatos, and a variety of release samples for different playing styles. This is all delivered for six different mic perspectives, with a robust 36 velocity layers for each note.

The library is downloaded using the Connect application, which downloads and installs the library automatically to your chosen folder. Then you can register the library with Native Access (which can be downloaded from Native Instruments) by using the registration number provided after purchasing the library. The standard library is around 30G, while the full library (with the extra mic perspectives) will require a 200G installation.

As a note – I encourage users (especially those with older computers) to batch re-save the patches before loading them. The initial unsaved load time is quite hefty, and attempting to re-save the patch after loading can stop your DAW dead in its tracks. Batch re-save before using, and you won’t have any problems.

The Walker 1955 Steinway is, by all means, a treat to play and listen to. It has a very controlled and balanced tone with a subtle woody flavor and an incredible lilting resonance in the high notes. The lower notes are bold and aren’t bloated or bottom-heavy, so the clarity of this instrument overall is outstanding.

It doesn’t sound clinical like some piano libraries do, but it doesn’t sound too characterful to the point where it only suits specific genres. To put it just, it’s a rare balance of great all-round tone with just enough color – and it should be, considering the library has been in the works for years. The hard work shows here.

The main mics (a pair of AKG C414s) are delivered in the standard version of the library, and I’m pleased to say that the best overall mic perspective was chosen for this standard version. Some developers hide their more premium mic perspectives behind a paywall, but the main mics genuinely shine here with a tasteful warmth and intimacy that will fit most applications, and they sound great.

The other close mics deliver a slightly more precise tone, with a brighter and thinner overall sound. These are great for pop and rock tracks.

The hammer mics give an even closer sound with a tighter transient and would also suit modern applications. The full mics deliver a warmer, intimate tone suited to cinematic or solo applications. The binaural mics provide a true-to-life sound of sitting at the piano as you play, and have an excellent clarity and air that sounds great in any kind of track.

The room mics have more presence and bloom, but they still sound close enough to work on their own in a lot of different styles – these definitely aren’t the kind of washy room mics you’re used to hearing – they have the same kind of clear transient detail as the close mics, which is lovely.

The sustains themselves have the expected dryness with the pedal up and a rich resonance with the pedal down.  It’s a clear resonance rather than a frequency-heavy washy resonance, so playing with the pedal down never gets hazy or too dream-like.  The staccatos are short and bouncy and have just the right amount of length to perform accents or fast repetitive passages, so that’s a plus for players who love slamming their chords in 8th or 16th notes.

The real star for me though are the una corda samples.  If you like the sound of the piano but wish it had a more soft and cushiony touch, you can just flick a switch to activate the una corda samples and drift off to a world of caressing keys.  The una corda tone for each of the mic positions is slightly different, but each one gives a velvety (but not too velvety) response with a disciplined sound.

For me, this kicks the library into high gear, because the piano will perform wonderfully in an upbeat orchestral track, but then can downshift into a carefully smooth tone for the more intimate moments.  The obsessive sampling has paid off in this regard, and not many piano libraries offer both standard and correct una corda samples.

The sound is lovely – but it’s also backed up by a flexible and straightforward GUI that allows the user to purge up or down pedal samples (so you can use just the pedal down samples if you want), the staccatos, the adaptive releases and the una corda samples.  You can also purge velocity layers to simplify the sound and save heaps of RAM – a must have for a library of this size, especially if you plan to use more than one mic position patch (each mic position is its patch).

You can shape the velocity response as well as the volume response for each velocity – so you can have only the softest layers playing at a higher volume if you’d like.  You can also change the sample start time (useful for tightening the staccatos further), the volume for the pedal and release noises, and even a handy ‘sweetening’ section is provided that thins out the tone, adds some compression, or adds some subtle saturation at the flick of a switch.

You can even choose which MIDI CC controls the pedal down samples, the una corda samples or sostenuto playing – which allows you to hold down a set of keys, hit a pedal to sustain those keys, and then openly play nonsustained notes while the held keys ring out.  It really has been well thought out to give the user enough flexibility without getting complex.

Of particular note though are these two features – the adaptive releases and the pedal catch.  Different release notes have been captured for hard playing, soft playing, quickly released notes, and held notes.

These samples are then activated when you release the keys quickly or slowly for lower and higher velocities, which means you get a life-like response from the piano – this is quite a rare feature in a piano library, and it allows the player to get very real-sounding staccatos and soft note-offs by just playing.  A top feature.

The other element of note is the pedal catch – if you hit some keys, release them, then engage the pedal quickly after releasing, the notes will re-engage at a lower volume, just like a piano would in real life.  Brilliant.

The only feature not offered in the library as of writing this article is a transition between pedal up samples to pedal down samples when engaging the pedal while holding the keys down.

Overall, Walker 1955 Steinway is a behemoth of a piano library that offers almost everything a piano player could want in a library, deeply sampled, and provided in 6 different perspectives that each stand on their own rather than being fragments of a studio setup – which is a feat that Imperfect Samples, Synthogy and even Spectrasonics haven’t risen to.

Sure, if you want to take advantage of all the velocity layers and sample sets, you have to wait a while for them to load into RAM, and re-saving the patches can get ugly (just save a snapshot instead), but that’s the price you pay for having it all at your fingertips.

The Walker library as an instrument is top of its class and sounds phenomenal, and as a heavyweight 200G package it also sits alongside notorious instruments like HZ Piano from Spitfire – but Walker can be purchased in smaller chunks and at less than half the price.

What we mainly have here with Walker 1955 Steinway D, is a piano library that delivers the kind of next-gen sampling and scripting finesse to secure a spot in the “deepest sampled pianos” list while challenging the high price that libraries like this usually charge. It’s a fireball that may just change up the way future piano libraries are sampled, presented and priced – in other words. Walker 1955 Steinway D is a game changer.