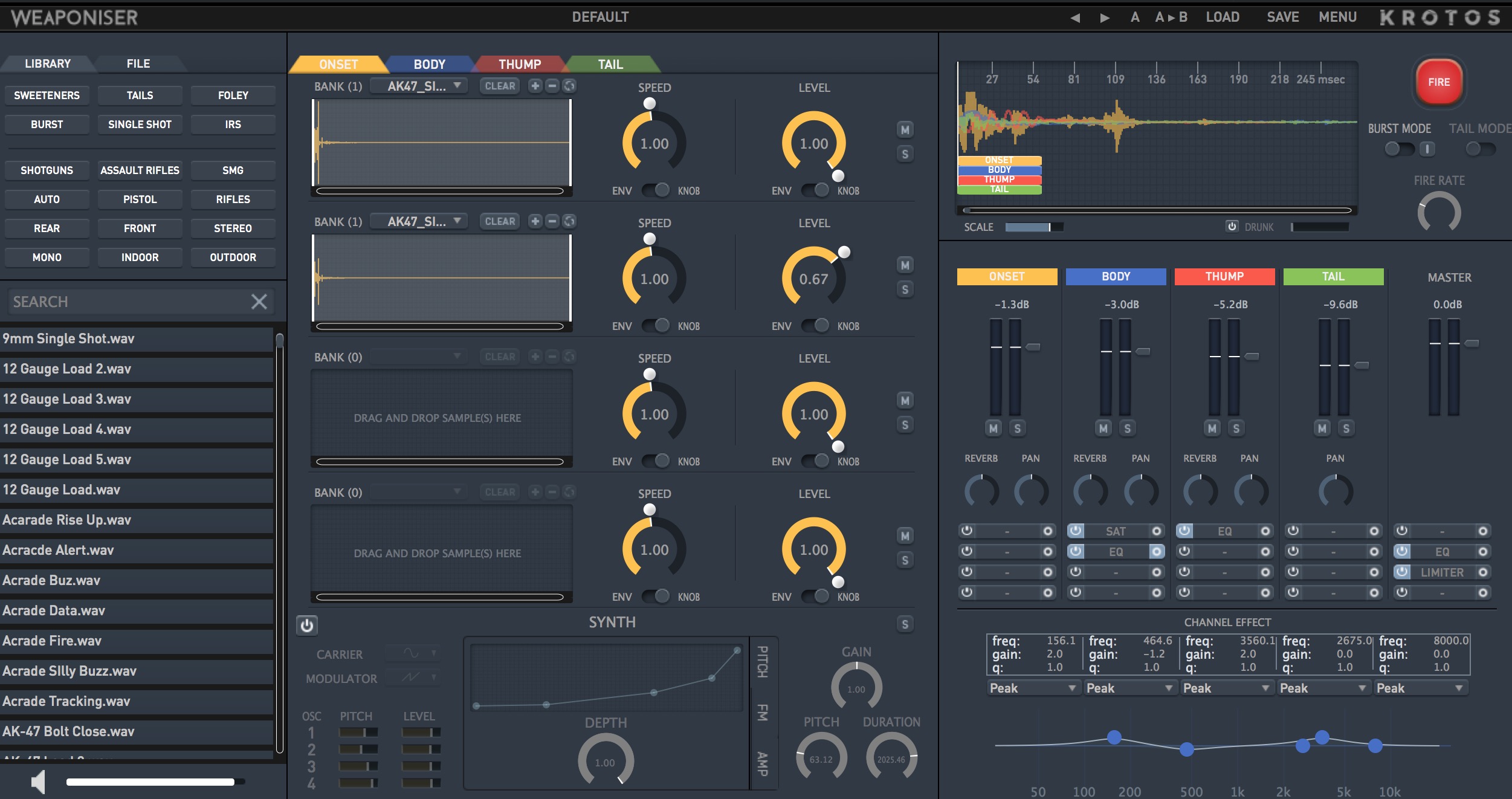 Krotos released an update to the Weaponiser (see our review here: Weaponiser Fully Loaded by Krotos Review) and released a sound collection for the tool: Battle Bundle Library.

Battle Bundle includes 5854 high-quality combat sounds – from sword attacks and rapiers to chainmail, shields, metal, hand-to-hand combat, a body falls and impacts plus much more. For Weaponiser the Battle Bundle is one of the most comprehensive libraries of battle-related sounds ever recorded for TV, film and video games.

Weaponiser Fully Loaded is a next generation sound design tool that renders tones from todays and future short and long hand weapons. Sound designers are always looking for weapon sounds. With the action-heavy trailer, games, and movies these days there is always a struggle to enhance the audience experience with new weapon sounds.

With the launch of version 1.1.0 of Weaponiser Krotos made it easier than ever to create dynamic, responsive sound design. You can currently add speed and amplitude variation to any bank in any of the plugin’s four engines, but also load up to five samples into each bank. That’s up to 80 different assets to be chosen on every trigger, with variation on 32 parameters!

Banks are now even more flexible. You can switch between random/round robin, per bank, and also allow Burst Mode to operate in round-robin mode, incrementing files in banks per round. By filling your banks with assets and setting them to random, this decreases the chance of ever hearing the exact same sound twice, even for sci-fi weapons.

Say goodbye to ‘machine-gunning’ of assets (pun intended) and hello to an even more powerful sample engine tailor-made for sound designers.

Weaponiser’s mixer now includes panning per engine and an all-new expanded Multi-Mode EQ (with a range of filter types now supported on all bands) for each engine FX slot. This makes the mixing process and having tighter control over your sounds even easier than before. Stereo waveforms are also supported in all banks and engines.

After many user requests, we’ve now created a dedicated ‘Tail On Release’ system, allowing a tail to be triggered on the release of the fire button or midi note, making it easier to achieve a cleaner mix or extra control over tails when in Burst Mode. We have also integrated this using ‘Tail Mode’.

Simply use the ‘Tail Mode’ switch to activate or deactivate this new mode. Again, Weaponiser’s new features open up a whole host of creative possibilities. For example, try using ‘Tail Mode’ to automatically set up a reload sound in the tail engine, which will be triggered every time a burst finishes.

Handling of the Tail modules’ impulse response reverb has also been improved. You can now trigger a tail on the release of the fire button or midi note, allowing a cleaner mix or extra control when in Burst Mode.

This allows for precise control of spatialization, as well as some interesting creative possibilities!

For Weaponiser Fully Loaded owners, this update also includes a huge new set of presets from the following artists:

These provide a total of 41 new presets and 402 new assets for use in Weaponiser Fully Loaded (designed and provided for by these artists).