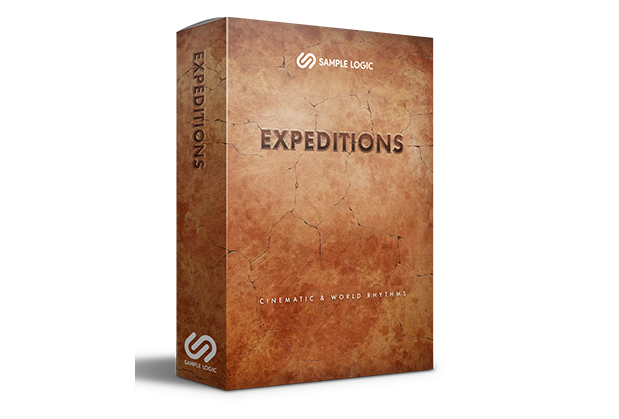 There are so many loop and phrase libraries for ethnic and cinematic application on the market, you’d have a better finding your way around Brooklyn in a cab. You have to do something interesting and playable to stand out with a loop library, and we’re going to see if Expeditions from Sample Logic provides that edge.

Sample Logic has been around for some time, offering widely used products like Assault, Impakt and Cinematic Keys among others. They’re no strangers to cinematic sampling and complex Kontakt scripting so this library is standard fare for them. Sample Logic did send a review copy with no strings attached.

Expeditions ships as a surprisingly small package that contains just shy of a thousand different loops, covering a wide range of territories including hybrid, ethnic, world, percussive and even the odd orchestral content.

As this is a Kontakt full library, it can be downloaded and installed to your folder of choice via the Connect downloader and played instantly. NOTE: before playing you should copy the ‘Presets – Rhythmology Expeditions’ folder into the ‘user/documents/Native Instruments/Kontakt 5’ folder for Kontakt 5, or the ‘user/documents/Native Instruments/Kontakt’ folder for Kontakt 6. Otherwise you may notice that the library won’t even load or play!

I’ll start this off by saying that I’m not a fan of loop libraries. I prefer to perform using instrument libraries and create my own loops, and I often find loops to be a very limited use case. Despite knowing this going in, I was pleasantly surprised at how musical Expeditions was.

The loops aren’t too generic but aren’t too complex either, and are recorded in a very natural way. While the hybrid style offerings and more epic loops are somewhat processed, most of the ethnic and world offerings are dynamic and flexible (switch off the Kontakt effects, and you’ll hear how natural these loops sound). This is great because it means I can use these snippets for a broader range of styles, including orchestral work.

There are expertly played percussion passages and melodic instruments from around the globe ranging from brass to accordions, guitar to bass, taikos to tablas and sprinkles of Africa all the way through Europe to the Middle East and Asia. The library was actually much more melodically flexible than I initially thought it would be, so for me that’s a big deal, especially considering I compose in so many different genres.

What makes this content sound even better though is the fact that every loop is offered in splices that can be reversed, thrown in different orders, and even given a stutter effect, which greatly increases the flexibility of the sounds overall. It’s presented as a colorful loop sandbox that gives you control over just how each phrase sounds and reacts, which I think is a refreshing thing.

By far the thing that prevents Expeditions from being a generic loop collection is the well-scripted patch that contains everything in it. This is an excellent example of enhancing already quality content and making it twice as fun to use.

There are four slots in which you can load any loop, and these loops can be selected via a search box or by just clicking left and right arrows (a very underrated feature in libraries), and you can control which parts of the loop are active or inactive and at what volume they playback.

But it goes deeper, allowing you to control in which order each splice is played, whether they’re played forward, reversed or in a forward-backward pattern, their pan, their stutter effect, and their transposition.

This logical set of parameters allows you to create and automate entirely new melodies with any of the provided melodic sounds (there is plenty of single note sounds to take advantage of here), so the control given is reasonably deep and extends far beyond just holding a key down and hearing a phrase.

The effects for each of the four loops are also freely configurable, which adds to the variety one can pull out of these samples. You can go full-industrial if you desire, using what once a group of melodic ethnic phrases to create glitched-out, distorted, detuned rhythms. T

hat’s something I especially appreciate being able to do. Also, while all of these loops and effects are going on, I was surprised to notice that the CPU usage was rather low, so props must be given for optimization here.

Playability wise, you can’t get much more straightforward than four keys for each loop slot and a key to play all at once, and a critical range for switching out different effects configurations on the fly (this can be complex but can yield fantastic results when prepared and used right).

To top all of this off, you can choose if a loop key is latching or unlatching, and even a randomization button is provided with control over which parameters will randomize, making this one of the most fun loop packages to thrash around on without wasting a bunch of time trying things out setting by setting. There are also a ton of presets that are fun to play and make excellent use of the library’s capabilities.

While composers who are more reliant on loop libraries will find Expeditions a priceless addition to their collection, I think there’s a lot on offer here for more hands-on composers.

The price will seem a bit high to those who don’t live or die by loops though, and even though the library does offer a lot from the sample and customisation side of things, I think lowering the price a bit would make it much more appealing to a wider range of composers. Nonetheless, it’s a handy tool to have at the ready in any kind of music.