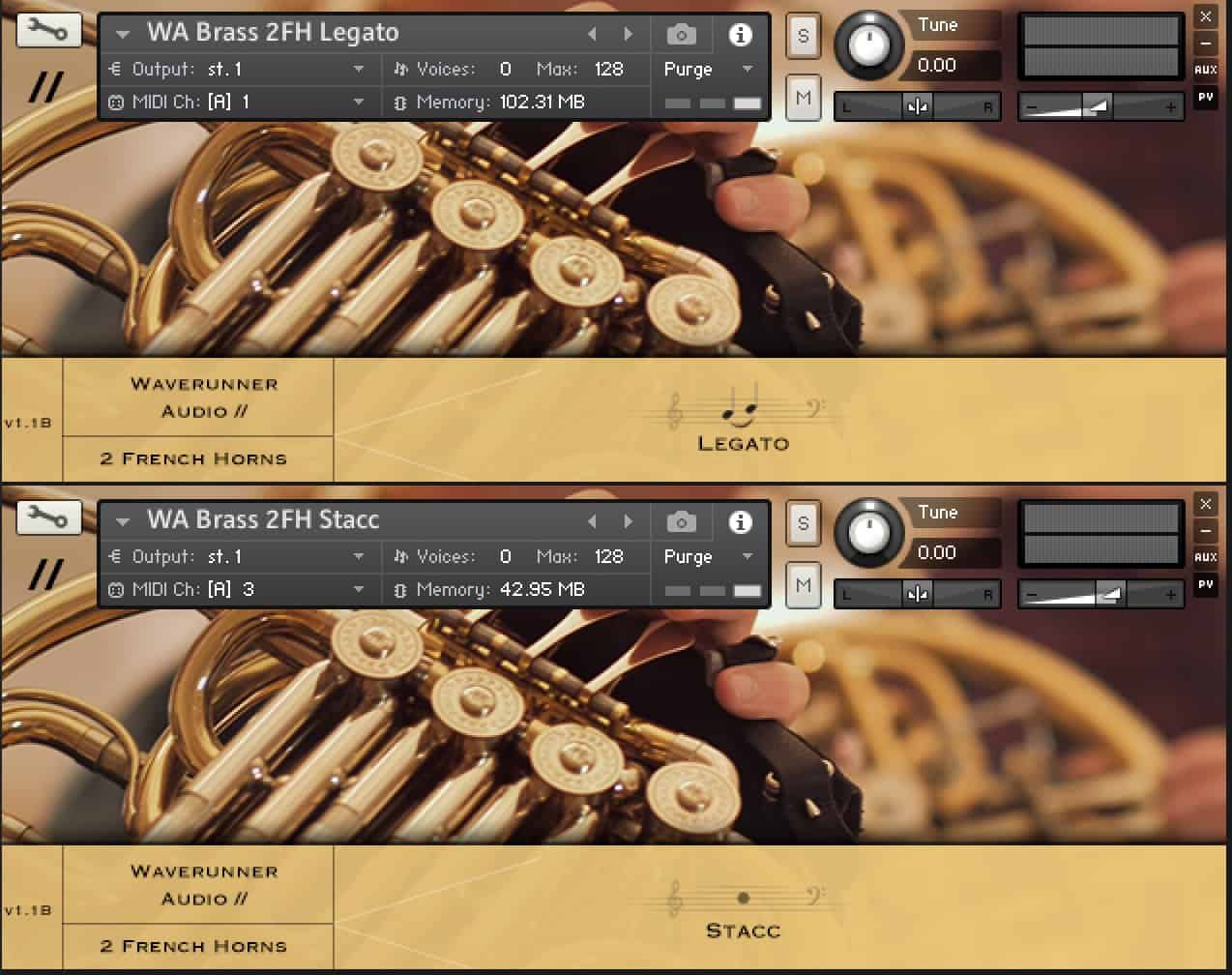 2 French Horns was born from experiments with players I’d worked with for a number of years on my YouTube covers channel. A chance opportunity came along to spend a solid day working in this room that compliments the horns in an incredible way. I asked my friends, Tony Hawkins and Julia MacDonell if they were up for what was meant to be a test day of sampling, and as we all enjoyed working together they were keen.

The day started as usual with our sound engineer Adaq Khan being early and asking what hot drink I’d like from the local café. Over a croissant, we discussed the concept, setup and how to get the most of the room and players with orchestral positioning baked in. I grew up with Edirol Orchestra and from a young age had always wanted to make something like my own version of ‘Orchestra 2’. Since of course there have been many such libraries, but it’s still in the back of my mind and makes me very excited to have started this humble orchestral sample journey and super happy people are enjoying and creating music with these horns.

This particular room we found by accident, it’s not designed for orchestral recording, but as shown it just doesn’t matter, if it works it works and if anything allows a unique offering up to the table. The sound kind of blooms, with the acoustics hugging the horns allowing the lower dynamics to be elevated while enhancing the bite of their fortissimo. This dryer sound has allowed for controlled editing and programming which has contributed to the smoothness and consistency people have been praising and in turn allows for control over the sound you want from them. The room ‘bloom’ translates really well with added reverb, meaning the horns sit well in larger spaces alongside other libraries, so there’s a lot of flexibility there.

Tone – from the lowest dynamic to the highest

The tone has been praised from the lowest dynamic to the highest, where users have pointed out the fortissimo as something they’ve found lacking in other libraries, and the lower dynamics have an excellent, rounded sound to them. So much of this is down to the incredible performance of the players, combined with that unique space and of course captured so well by our sound engineer Adaq Khan. Adaq is mentored under award-winning engineer Tony Faulkner and has honed his technique to an excellent art recording both live and orchestral records. He’s worked on dozen’s of classical number one releases, and there’s his natural sound left in the samples, pretty much untouched from the session.

That Adaq, Tony, Julia and I are all so familiar meant the work gone into the day was all in a good mood and good spirits, so there was unique energy that we all got a lot from and I think that element really helps. Tony and Julia’s efforts were awe-inspiring, and they looked to push themselves in the session, this being a new way of recording for them. Particularly of note is the consistency across dynamics and some incredible legato performances. Tony is an ex-trumpet player and brings his trumpet skills to the horn, resulting in the mighty loud dynamics found in the library. We recorded two dynamics of legato; I always felt a bit cheated to find libraries from big developers offering just one high dynamic of legato and using eq cuts to merge with the lower dynamics. You lose so much nuance of the instrument both tone wise and performance wise. So with these, when you’re playing at lower dynamics, you’re getting a much more authentic sound.

In the Summer of 2017, I left London and moved to a tiny village near my hometown of Nottingham. Surrounded by fields, rivers, and forests, I’d take frequent walks during which I’d come up with ideas including a few yet to be released libraries and the name Waverunner Audio. Watching the combine harvesters from my studio room. I took that time to learn enough Kontakt coding to put together a legato script based on advice from a few other developers and of particular help was David Healey of Xtant Audio. That there is someone of his caliber so willing to give advice and help was great to see, and I think a huge asset to the VI community.

My approach to editing is pretty lengthy compared to anyone else I’m aware of, who seem to have lots of automated systems. I feel in order to really get the most of an instrument build, each sample should be listened to and edited individually, and that’s how I edit my samples. Reaper is a great DAW for editing samples due to how easy it is to customize and create macros. I edit each sample start and the fade, so there’s no generic start and exact fade on each sample. Every sample (which can run into the hundreds if not thousands) is listened to, considered, given an individual fade if needed, not massively noticeable necessarily but I believe adds up and contributes to the ‘feel’, avoids clipping and ensures each and every sample is present in its best way. Then every legato transition is tweaked and tested then tweaked some more. Though a lengthy process, the result is lasting and the work worth it. I think there’s something to be said for creating a library from start to finish; from curating the content, conducting the session, editing the samples and building the instrument, every note and nuance is in your head every step of the way.

I posted initial tests on VI-CONTROL and The SoundBoard as well as shared among some composer friends. The feedback was such I went on to release a commercial version with the legato. The interface is simple, though maybe expanded on, that’s one of the great things, you simply load it up and get great, playable 2 French Horns. I’ve found they can really shine in exposed roles (the ‘Study for 2 French Horns on the SoundCloud really shows off their flexibility and dynamic range) and also sit well to either layer or embellish other libraries. So there are a humble number of very happy users that have inspired expanding the library and indeed the brass range.

In the sampling world where branding is a huge part of things, perhaps some shy away from lesser-known spaces and new developers, but given the vast market, we’ve found an audience really receptive purely based on sound, which is really where it’s at. There are new features I would like to implement, such as being able to automatically layer the shorts, choose round robins and perhaps ship with some complimentary convolution reverbs, so those things may come in an update at some point. A couple of follow-ups are coming in the form of trumpets and tuba, so keep an eye out for them!

You can purchase 2 French Horns here.