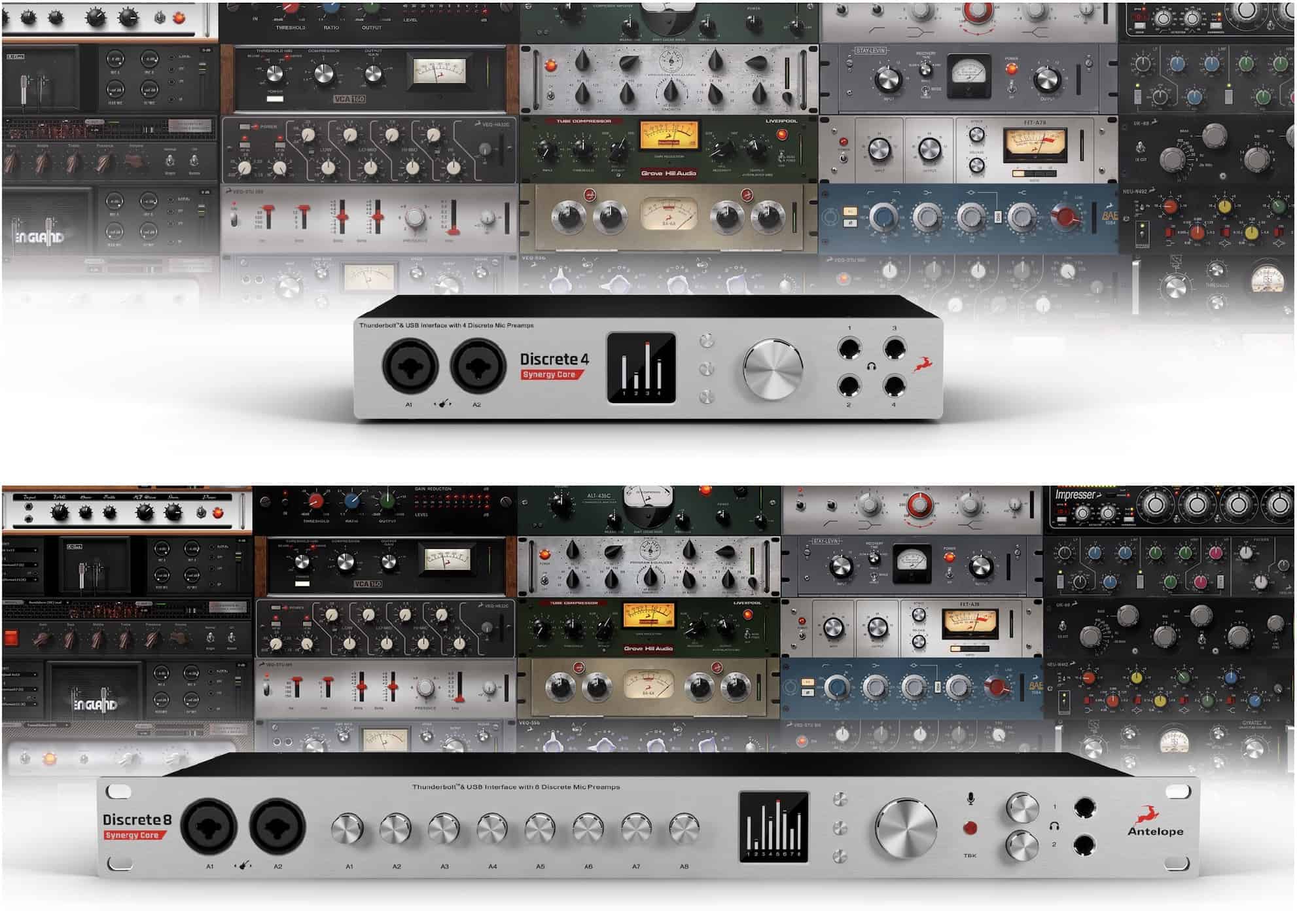 The Discrete 8 brought a new level of sound quality and power to mid-sized studios. We are now taking it to the next stage with the introduction of Synergy Core – Antelope Audio’s next-generation signal processing platform. With FPGA’s massive parallel computation capabilities and industry-standard DSP power combined, Synergy Core frees up your CPU while processing audio effects with extremely low latency.

With two DSP chips and an FPGA chip under the hood, the Discrete 8 Synergy Core can run all your Antelope FX — stabilizing your DAW by offloading effects processing to dedicated chips, without bogging down your host CPU. With the Discrete 8 Synergy Core in your rack, you don’t need a latest-spec computer to run your favorite plugs. Antelope effects running on Antelope hardware means you can shorten buffer size, reduce latency, and free up your host Mac or PC to run CPU-hogging VST synths and native time-based effects.

Antelope’s unique Synergy Core platform combines FPGA + DSP in one interface. With the Discrete 8 Synergy Core, you get state-of-the-art ARM DSPs with faster clock rates than chips found in lesser interfaces, plus Antelope’s proven FPGA platform that delivers lower latency in FX chains. This exclusive hybrid architecture enables a wider variety of Antelope effects than ever — time-based delays, choruses, flangers, and more. Your Discrete 8 Synergy Core comes with $3,000 of plug-ins: compressors, EQs, reverbs, amp models based on iconic vintage gear — and all the processing power you need to run them!

Analog-to-digital and digital-to-analog converters are at the heart of every DAW-based studio — and your converters can make or break your sound. That’s why the Antelope Audio Discrete 8 Synergy Core offers pristine AD/DA with 121 dB dynamic range on the analog inputs and class-leading 130 dB dynamic range on the monitor outputs, so you can capture and play back your audio with Antelope clarity.

More I/O for Your Growing Studio

With a price-to-performance ratio that goes toe-to-toe with any Thunderbolt or USB audio interface available, the Antelope Audio Discrete 4 is ideal for musicians, artists, and producers who need a compact, road-ready recording setup that unlocks unprecedented power to create.

Under the hood, the Discrete 4 Synergy Core is loaded with twin DSP chips plus an FPGA processor that work together to run Antelope Audio’s vast collection of vintage-inspired effects plug-ins — without sapping power from your host Mac or PC. Synergy Core increases your recording rig’s stability by offloading audio effects processing to your Discrete interface’s dedicated chips. Adding the Discrete 4 Synergy Core to your system means your DAW can make more efficient use of available CPU power — extending the life cycle of your existing Mac or PC, so you don’t have to upgrade to a latest-spec computer just to run all your favorite plug-ins. With Antelope effects running on Antelope hardware, your system is optimized right out of the box — allowing you to shorten your audio buffer size, reduce latency, eliminate clicks and pops, and free up your host computer to run CPU-heavy VST synths, samplers, and native time-based effects.

Antelope Audio’s industry-leading FPGA audio processing platform gives you lower latency in effects chains, allowing you to stack effects while adding mere microseconds, not milliseconds, to your signal. The Discrete 4 Synergy Core fuses both FPGA + DSP chips in one Antelope audio interface, harnessing the parallel processing power of FPGA alongside the latest-generation state-of-the-art ARM DSP chips developed for cloud computing and mobile tech — processors that deliver a faster clock rate than other DSP chips used in the audio interface market. This exclusive hybrid architecture offers computing power synergies unique to Antelope Audio, greatly expanding the variety of Antelope effects that can be developed — including time-based delays, choruses, flangers, and beyond. Your Discrete 4 Synergy Core arrives loaded with 36 Antelope FX included free — classic compressors, studio EQs, must-have reverbs, tube guitar amp models based on iconic vintage gear — and all the processing power you need to run them!

A-to-D and D-to-A converters are at the heart of every DAW-based audio recording and playback system — and your converters can make or break your studio. That’s why the Antelope Audio Discrete 4 Synergy Core is loaded with proven, best-in-class AD/DA with 121 dB of dynamic range on the analog inputs and monitor outputs — so you can capture and monitor your sound with Antelope clarity at up to 192 kHz/24-bit resolution.

The Discrete 4 Synergy Core offers, all the same, I/O as Antelope’s hit original Discrete 4 interface. With both USB and Thunderbolt I/O, the Discrete 4 Synergy Core lets you choose how you want to connect to your Mac or Windows PC. On the front panel, you’ll find two XLR-1/4″ combi inputs with switchable mic/line/instrument preamps, and four independent headphone outputs — enough for you and all the artists you’re recording. Take a look at the back panel, and you’ll see two more XLR-1/4″ combi inputs, two 1/4″ outputs to feed your monitors plus 4 more line outs to connect to outboard gear, ADAT and S/PDIF digital I/O via optical Toslink, and two Word Clock outputs to get your studio in sync with Antelope’s legendary digital clocking. Hand-built by Antelope engineers to give you extensive analog and digital I/O in a robust, compact unit, the Discrete 4 Synergy Core gives you serious bang for your I/O buck.

Review of Clarett 8PreX by Focusrite