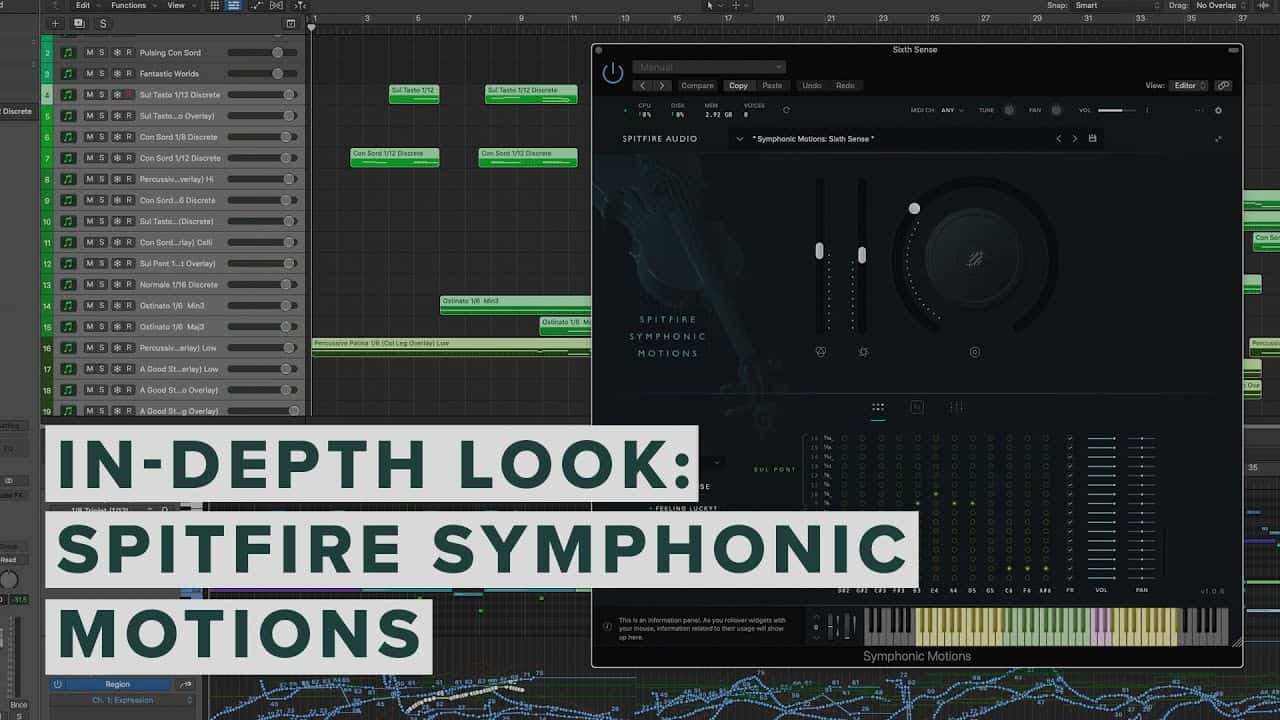 Spitfire Symphonic Motions makes it easy to create sophisticated sounding kinetic passages, combinations of rhythms and playing techniques to elevate your scores, as well as solving a common problem with virtual string instruments — achieving realistic rebowing. Recorded in the same space, with the same world-class players and attention to detail, this inspiring tool perfectly complements any library in our Symphonic Range, but is also inspiring when used on its own, adding texture, momentum and depth to your cinematic compositions.

Enhance the realism of your scores with this dynamic new addition to the Spitfire Symphonic Range.

Spitfire Symphonic Motions is an inspiring tool created by composers, for composers, offering the flexibility to design expressive shorts and intricate rhythmic patterns with ease, bringing your scores to life. Featuring London’s finest string players performing a stunning range of rebowing movements, rhythms and playing techniques, experience the same high-end quality as the rest of our celebrated Symphonic libraries, expertly recorded in the world-famous Hall at AIR Studios.

These performances are presented in an easy-to-use grid interface inside our award-winning dedicated plug-in, for instant access to almost infinite combinations of tempo-locked rhythms, techniques and realistic rebowing.

It goes without saying, almost, that anyone chasing after a blockbuster sound must go bold. By that same token, then, anyone seeking cinematic- sounding results must go big. Indeed, it doesn’t get much bigger or more cinematic-sounding than Lyndhurst Hall — built-in 1884 by Alfred Waterhouse, the architect of the Natural History Museum, and now one of the world’s largest recording rooms, able to accommodate a full symphony orchestra and choir simultaneously. With an inspiring acoustic adored by musicians the world over since being opened as such in 1992 by none other than English record producer, arranger, composer, conductor, musician, and audio engineer extraordinaire George Martin. Often referred to as the ‘Fifth Beatle’ in deference to his extensive involvement on each of The Beatles’ original albums. Among the many Oscar-winning and -nominated works recorded in the Hall — heard in cinemas and homes across the globe. The scintillating scores to the highest-grossing blockbusters, including the Harry Potter film series (John Williams, Patrick Doyle, Nicholas Hooper, and Alexandre Desplat), The Dark Knight (Hans Zimmer and James Newton Howard), and Atonement (Dario Marianelli), to name but a few outstanding orchestral examples.

Cinematic composition is the answer and Spitfire Audio knows that for sure — hence helpfully setting symphonic strings in motion for what was literally to become SPITFIRE SYMPHONIC MOTIONS by capturing the stunning performances of the same first-call session players used in its SYMPHONIC… range in the hallowed (Lyndhurst) Hall at London’s legendary AIR Studios, sampled with the sound-specialising British music technology company’s usual more is more approach by Jake Jackson, Chief Engineer and Associate Producer for Spitfire Audio, and an award-winning recording and mix engineer/producer with wide- ranging film, television, and computer game soundtrack — and, more recently, album — credits to his notable name. As a finished product par excellence, SPITFIRE SYMPHONIC MOTIONS makes available a choice of six signals, including close tree and ambient mics, as well as three carefully curated mixes.

How to Play the Detaché Bow Stroke on Cello